That literally was my initial thought when the earthquake hit about 30 minutes ago on this Tuesday afternoon.  Followed by the following conversation in my head:

“Is this normal? That must be the biggest jackhammer ever!  And could it shake the room this much?

“Wait…this is lasting too long to be a fighter jet”

In all honesty, my initial gut reaction was “EARTHQUAKE!” – but this was immediately cast aside in my head for being a ridiculous thought.  After all, I’m in Virginia, of all places.  No earthquakes here.  Or at least, none that I notice.

After going back and forth in my head, with the room continuing to shake, I reached the following conclusion.  Yes, this was indeed an earthquake.  Next thought process?

“Uhh—when is this going to end?”

“Crap! I have no idea what to do in an earthquake.”

Proceeded by running around, slightly panicked, trying to find a place in my 3rd story apartment where I thought I might be safe…

Should I go outside?  Do I stand under a doorframe?  Go under the bed and join my cat, who ran under there promptly and who is, by the way, still there?

I felt like a chicken with it’s head cut off.  Instead, I went back to my desk, and proceeded to check Twitter (yes, crazily enough, that was my decision process) to see if I was going crazy.  Phew!  Lots of tweets about earthquakes.  I am clearly not imagining things.Followed by more walking around…continued shaking…and eventual calm. 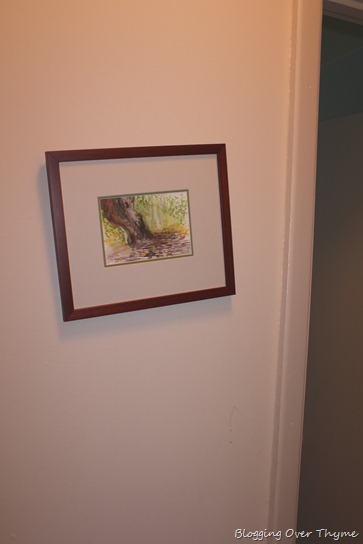 Several crooked painting frames and one terrified cat.  In all seriousness though, it was very scary!  Hope everyone out there on the East Coast or near the epicenter (which was only 75 miles away from my apartment!), is safe.

Meanwhile, I’m going to continue to attempt to call my sister in San Francisco (ironically, the most earthquake prone state), to let her know I’m ok!

This post contains affiliate links, which means that I make a small commission off items you purchase at no additional cost to you. Please read my privacy policy for more information.
« Previous PostSummer Peach Yogurt Smoothie
Next Post » Off to Scotland