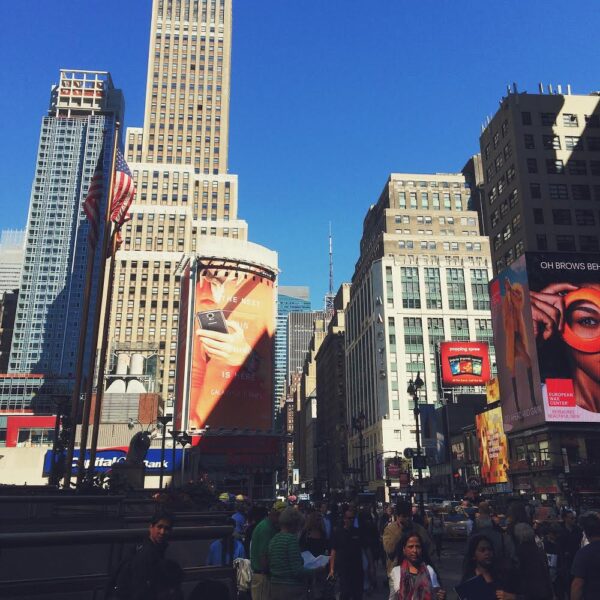 Hi! Word of warning. This post could be extremely long. I took nearly 400 photos in New York City last weekend (I was only there for 72 hours and I did sleep quite a bit, so that’s a decent amount). I thought it was only right that I shared a few with you and told you more about my trip!

Since my older sister and brother-in-law live in the city, I try to go up to visit them every once in a while, but don’t visit nearly enough. As an early wedding gift, they invited us to spend the weekend with them and take us out to dinner at a special restaurant outside the city (aka. tomorrow’s post).

However, and I alluded to this in previous posts, Connor has actually been living up there with them for the entire month of September! He is currently doing month-long medical rotations at several hospitals all over the country to prepare for applying to residency. It has been pretty crazy, but the fun part is that it has given me an excuse to travel a bit more to visit him.

I ended up taking an early train on Friday morning, and arrived in the city by noon. Oh my gosh, I love trains. It is my absolute favorite way to travel. Also, I had my first Uber experience on the way to Union Station in DC. Quick summary: “This Is How We Do It” was playing when I got into the car, and I was offered a free lollipop. I’m a fan. 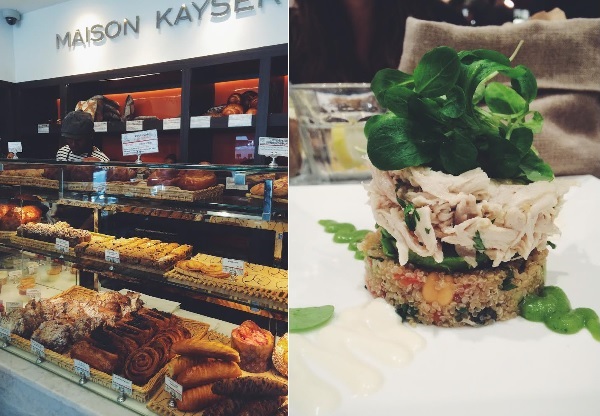 Anyway, since Connor was working through the evening, I went directly to my sister’s place in the Upper East Side to meet her, go out to lunch, and do some other fun stuff in the city.

After debating the options, we ended up going to Maison Kayser for lunch, where we shared a really elegant chicken and quinoa salad (we were not expecting that presentation!), and an equally as delicious fig and goat cheese tartine. I’m totally recreating both at some point. Also, they brought us a bread basket of their amazing, amazing baguette (they are famous for their bread and pastries!) and I insisted on eating the entire thing.

I also got to catch up with my sister, Pippa, who is just over 20-weeks pregnant! I definitely forgot to tell you guys about that–it is my first niece or nephew (and my parent’s first grandchild), so it is a pretty exciting time. Also, they’re due on Valentine’s Day, how cool is that? 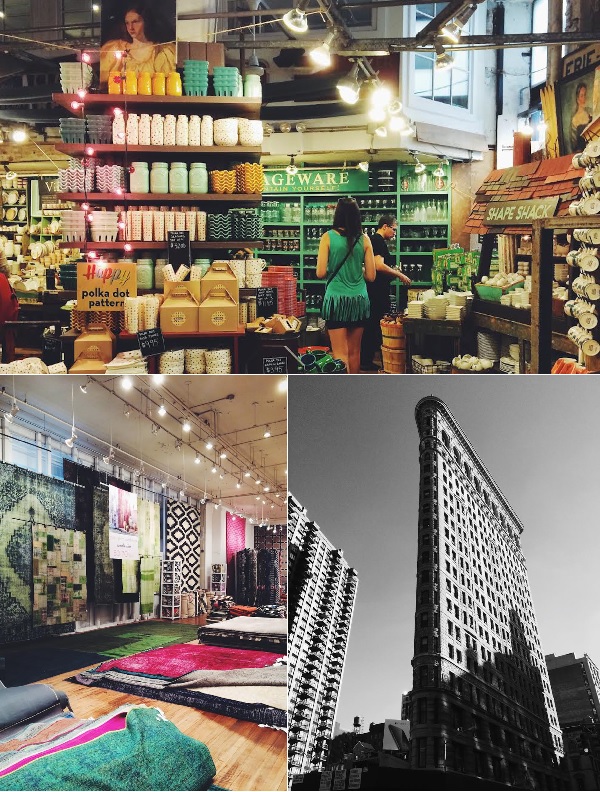 My sister had asked me what I wanted to do in the afternoon a few weeks ago, and I immediately stated, “I want to go to Fish’s Eddy!”. I’ve seen pictures of the infamous food blogging prop (I mean…dinner, glassware, and silverware) store near Union Square for years, and I wanted to experience it for myself.

I definitely wanted all the things, but I have to say, I was a little disappointed. Don’t hate me! The selection was huge, but it was a lot more expensive than I anticipated. I’ve had better luck finding deals on cool stuff at Anthropologie and West Elm.

We ended up taking the opportunity while we were there to also visit the Union Square Farmer’s Market, and Mario Batali’s Eataly, which I’ve been to before and absolutely love.

I took photographs in front of the “Parmigiano-Reggiano” fridge, which is essentially my version of Mecca.

Since it was literally just next door to Fish’s Eddy, we also stopped into ABC Carpet & Home to check out rug ideas for my sisters’ nursery. It is essentially a mini Costco-sized rug showroom smack dab in the center of New York City. It was weird and wonderful, and we both ended up liking the most expensive rug in the whole store (ugh, typical). 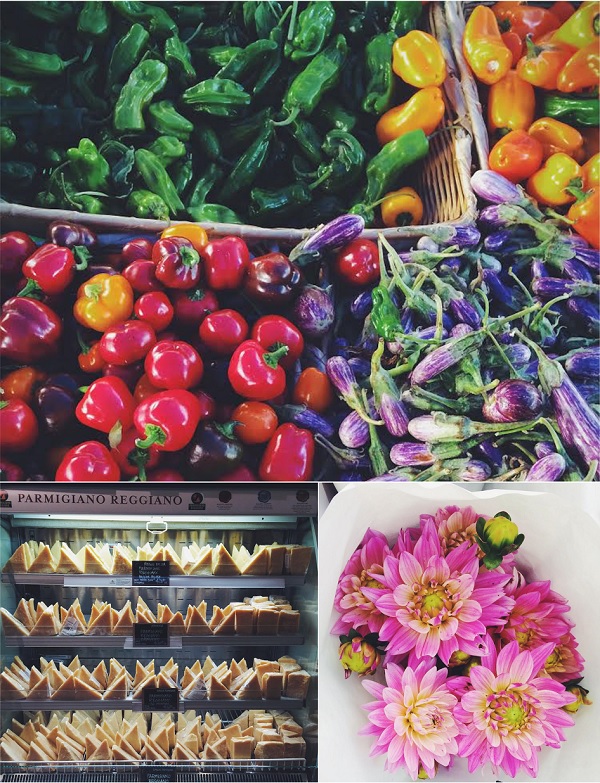 After walking around all afternoon, we ended up heading back to the apartment to meet up with my brother-in-law, Brian, and relax a bit before dinner that night.

Connor met us on the way, and we headed to Curry Hill to eat at my sister’s favorite Indian vegetarian restaurant. Unfortunately, when we arrived, we discovered that they had closed for the evening due to a gas leak. Since the area is brimming with Indian restaurants, we ended up walking around the block and eating at their sister restaurant, Pippali. It was delicious!

I have to say, one of my favorite things about New York City is the breadth of good restaurant options that you can just walk into, and not necessarily have to wait for an extensive period of time to get a table at. 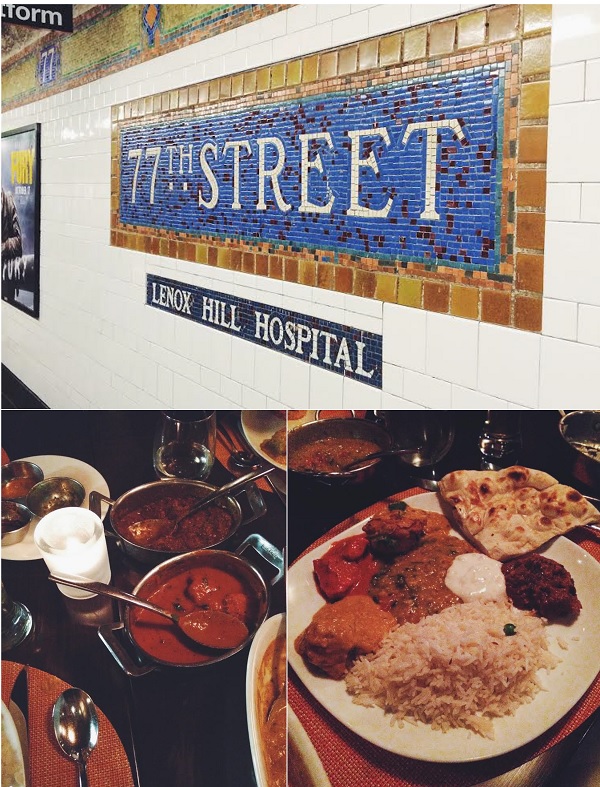 After catching up on some much-needed sleep (that mostly applies to Connor, but I decided to partake too), we continued the marathon of eating by heading to East End Kitchen, close by my sister’s apartment, for brunch the next morning.

Connor and Brian had the richest breakfast in the world (shrimp and grits, does that even qualify as breakfast?), and my sister and I had an omelet and egg scramble.

I love me some brunch. 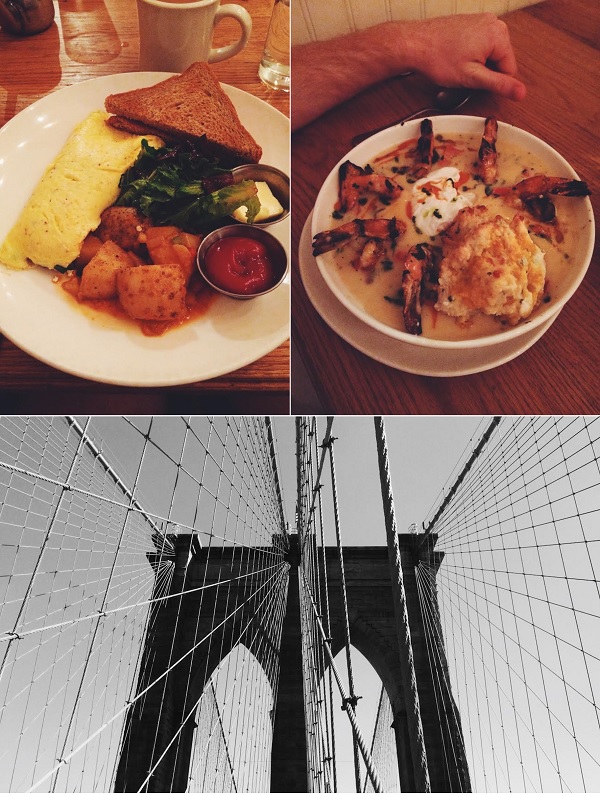 We then took the subway downtown to walk across the Brooklyn Bridge, and spend the afternoon in the Dumbo area. The weather could not have been nicer!

It was my first time walking across the Bridge (and my first time in Brooklyn!). People walk really slowly on the Brooklyn Bridge. I’m one of those weird people that walks really fast (all the time, for no apparent reason) and it drove me bonkers. 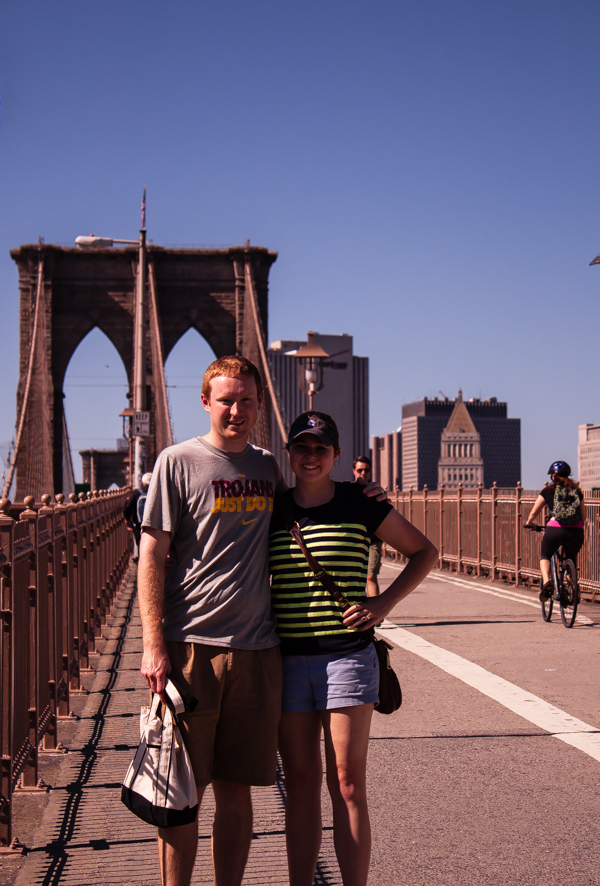 The Dumbo area was holding a Street Arts Festival at the same time we were there, so the area was completely packed, but it was still really nice to visit the park and see the area. 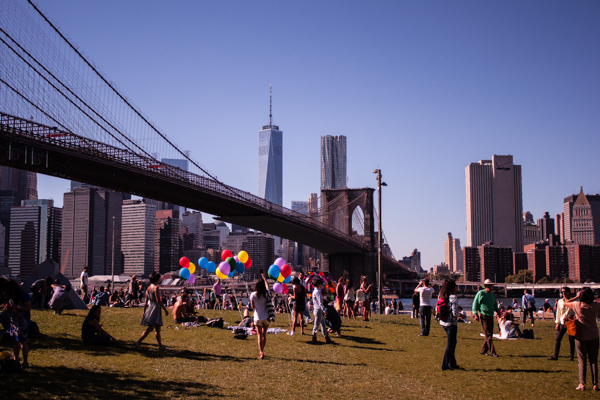 And the view of the city was incredible! 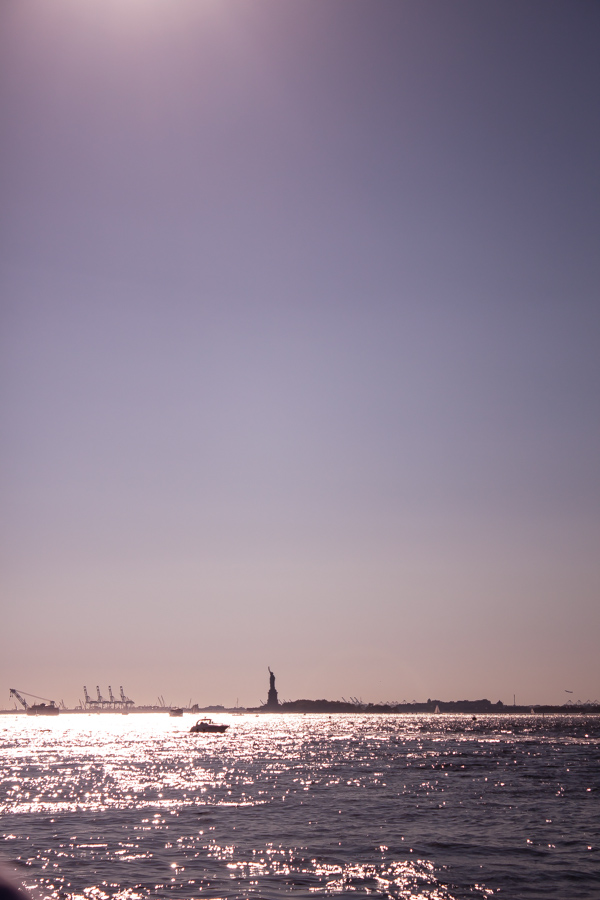 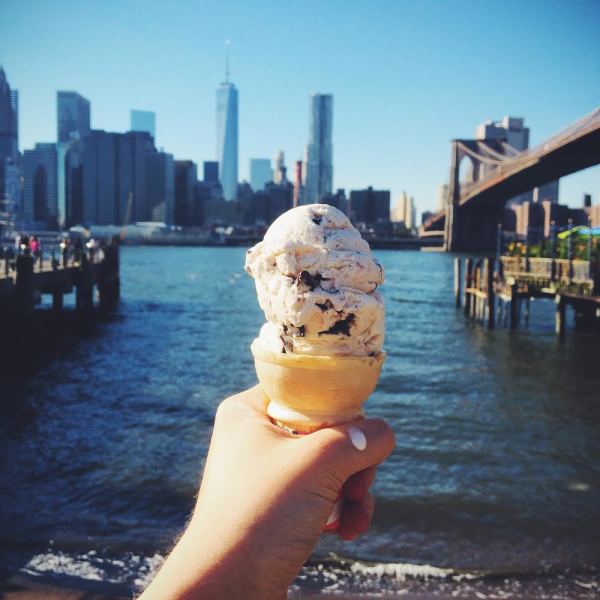 Before we left, we had to make a visit to the famous Brooklyn Ice Cream Factory, where I had a scoop of vanilla chocolate chunk at my sister’s recommendation.

It was simple and perfect!

We then headed home on the subway and a few hours later, headed around the corner to Pippa and Brian’s go-to Mexican restaurant, Mole, where I indulged in the world’s largest serving of fish tacos served on homemade blue tortillas. 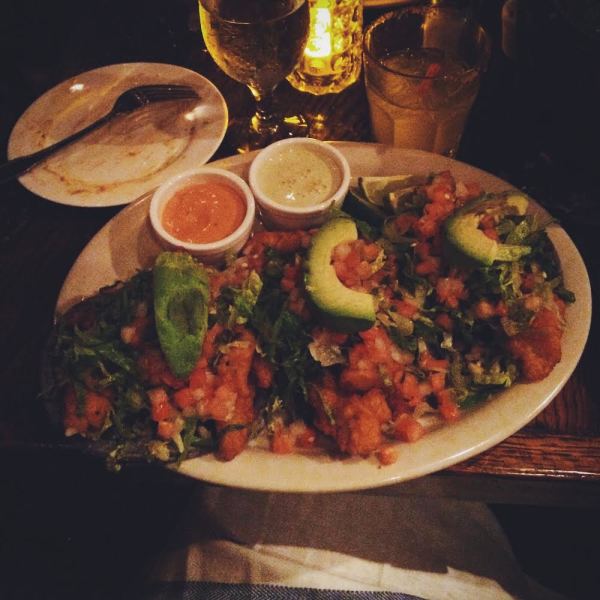 Tomorrow, despite the plethora of food shared today, I’m going to tell you about one of the best meals I’ve ever had in my entire life. Be prepared for even more pictures.

ALSO, I SAW MARTHA STEWART. So there’s that.

This post contains affiliate links, which means that I make a small commission off items you purchase at no additional cost to you. Please read my privacy policy for more information.
« Previous PostRaspberry Pavlova with Vanilla Whipped Cream
Next Post » A Visit to Blue Hill at Stone Barns

23 Comments on “A New York Minute”