Where were we?  Oh yes…day three: 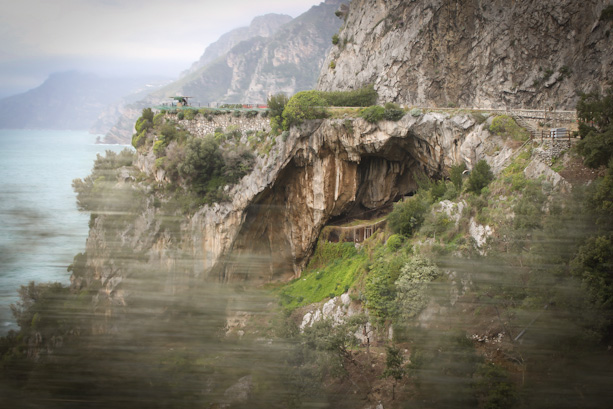 After spending a full day exploring Sorrento, we decided to spend the following day traveling further down the Amalfi Coast to the towns of Amalfi & Ravello.  Instead of driving, we decided to make things a bit easier by taking the local SITA bus (derived from buS ITAlia).  Since the Amalfi Coast road is famously known for it’s extremely windy and cliff-hugging roads, it was a nice opportunity for both of us to enjoy the view and avoid the hassle of finding parking. 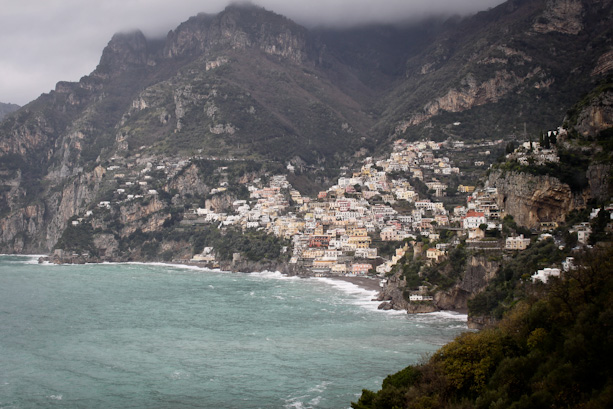 Nothing screams confidence like multiple pictures of Jesus & the Blessed Virgin Mary in the bus driver’s dashboard.  In the end, the drive wasn’t nearly as scary as it was hype up to be and the bus drivers have probably driven down the roads countless times. 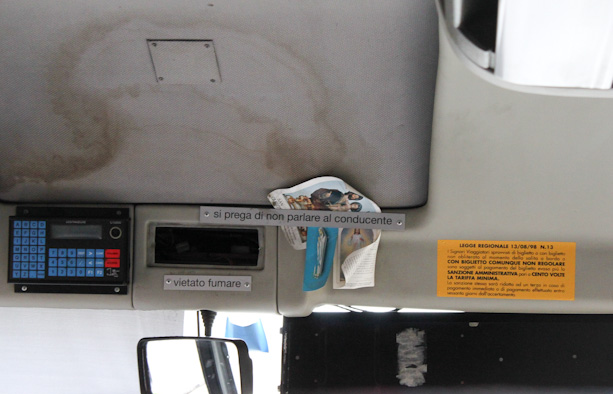 I did close my eyes a few times though.  We also decided it would be best if Connor sat in the window (cliff-side) seat too.  Yes, this coming from the person that once was convinced to go sky diving…

This was probably our worst weather day during the entire trip.  Though it was cloudy and grey, I actually thought it made the coast even more beautiful–especially since the clouds were low and covering most of the mountainside. 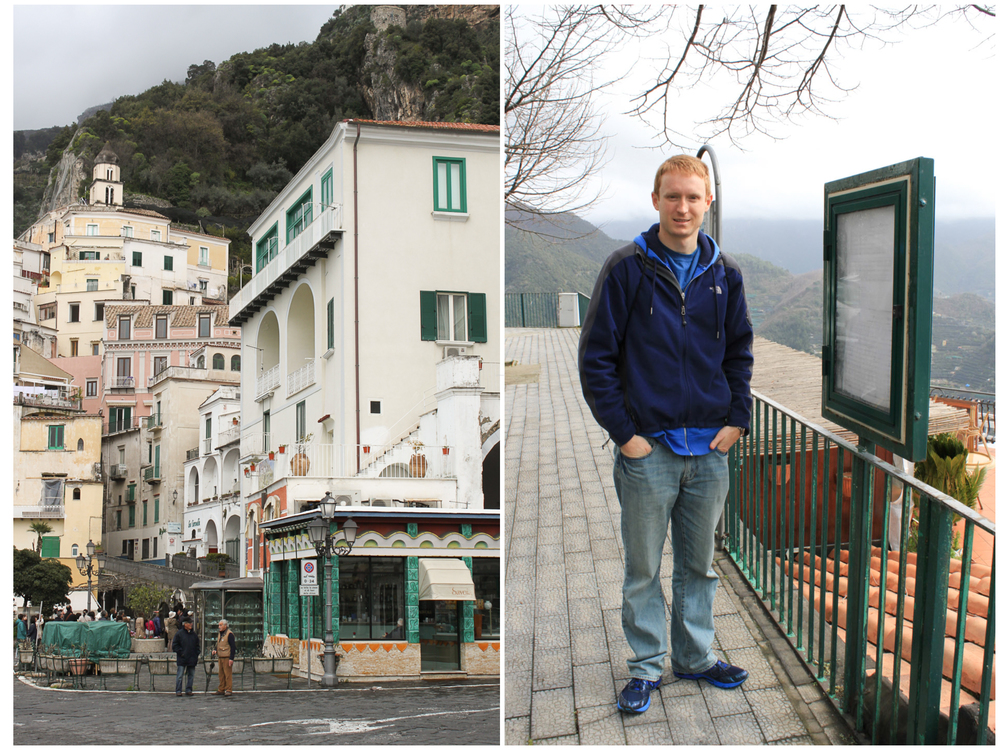 It took about an hour to drive to Amalfi and then we took another short bus ride to Ravello, a tiny town located right up in the hills.  The town itself was founded in the 9th century and once had a population of more than 30,000, but today only has a few thousand residents.  It is also the town which hosts the famous Wagner Arts Music Festival every year. 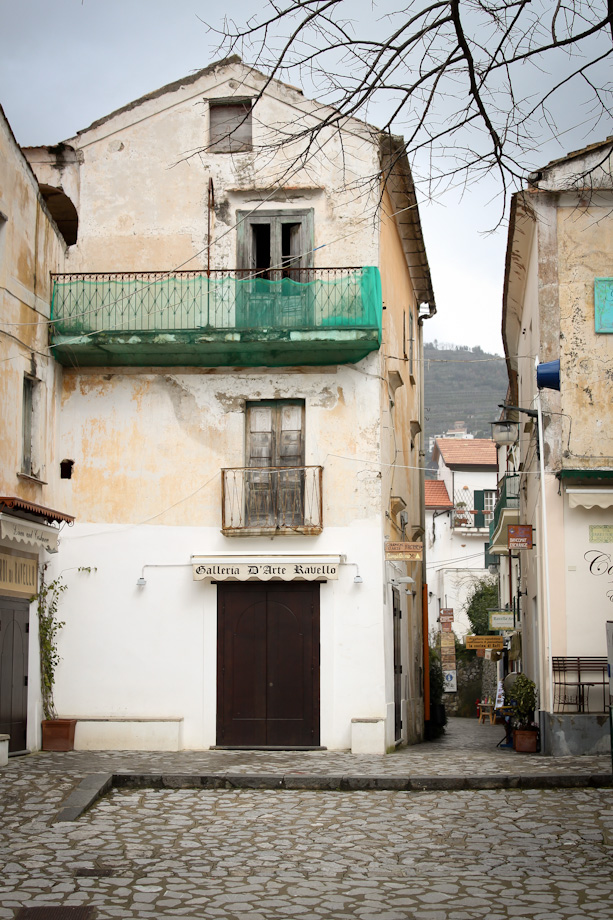 The main square was one of my favorite parts of the town. I wish we had architecture like this in the states! 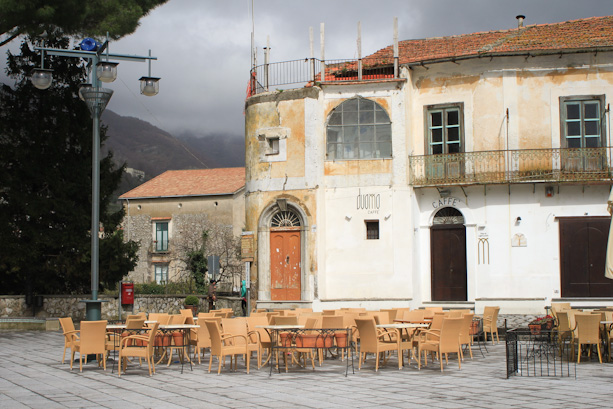 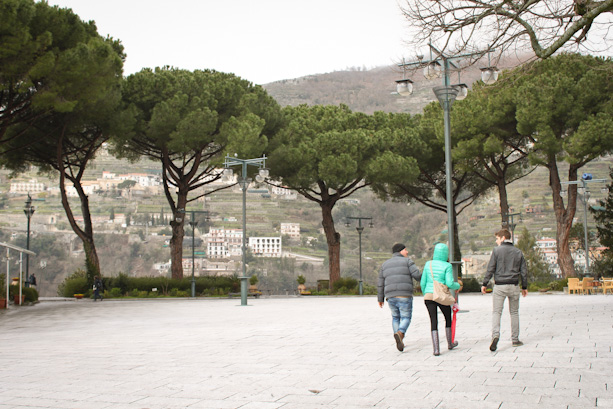 While walking around town, we also discovered a great pottery shop.  There were many pottery shops along the Amalfi
Coast, but this was by far the most impressive.  Everything was hand-painted and incredibly intricate. 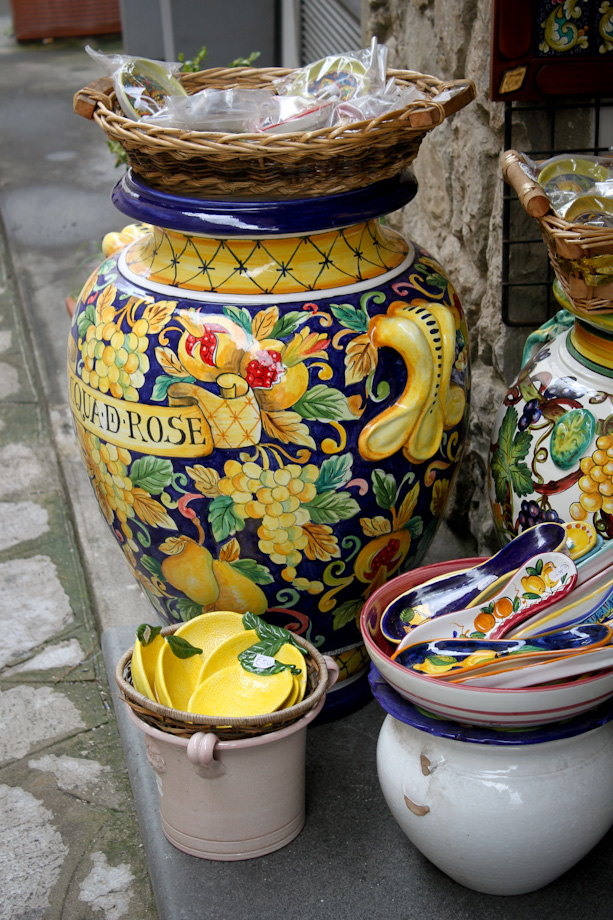 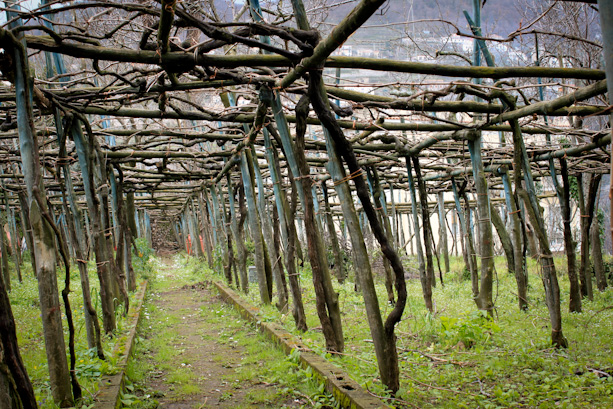 After spending too much money on pottery, we then walked over to the main destination:  Villa Cimbrone. 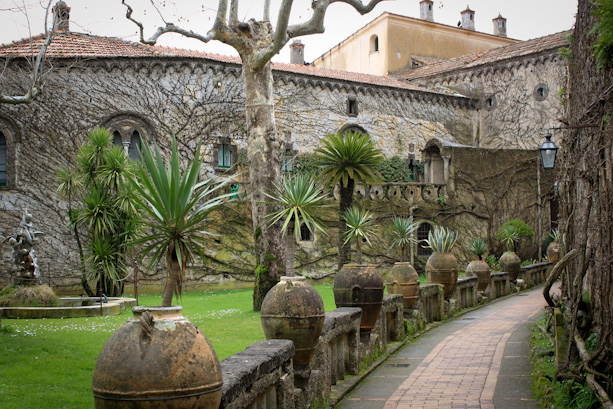 It was built in 1905 and is filled with amazing gardens overlooking the coast.  It was actually converted into a hotel and is considered by many to be the most beautiful garden in Italy. 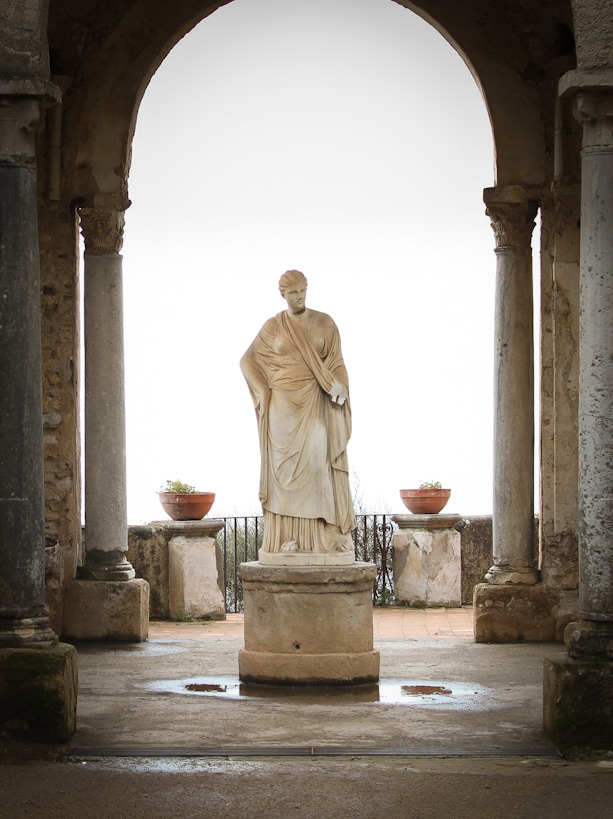 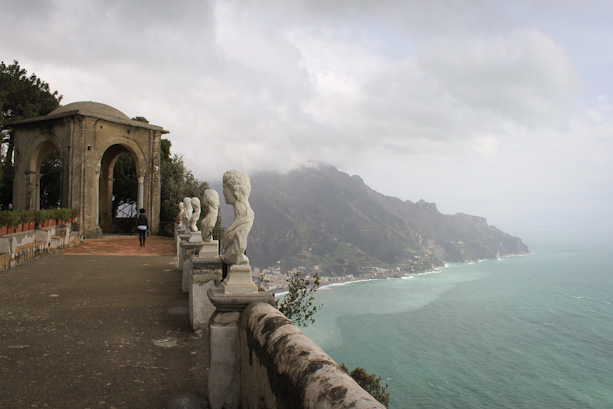 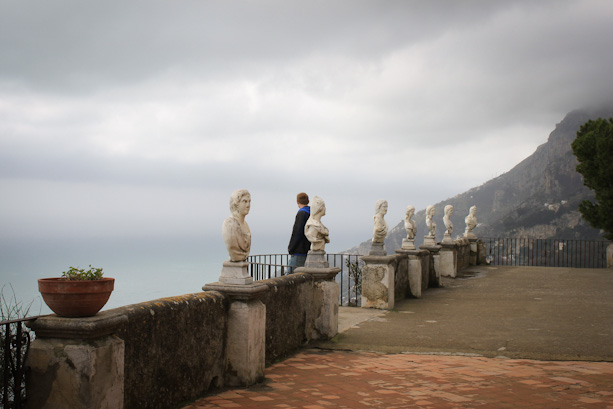 After a while, it seemed pretty normal. 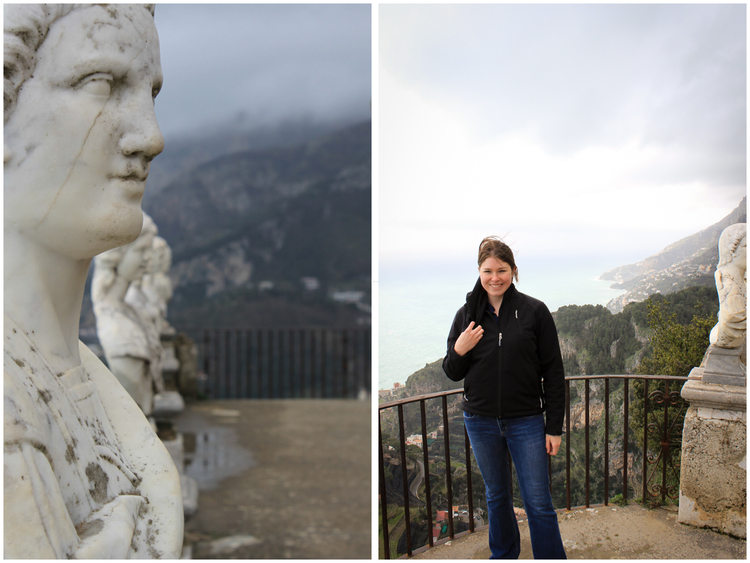 At this point, we started to get really hungry and headed back into the center of town to find lunch.  We ended up going to a spot recommended in our guide book called Cumpa Cosimo. 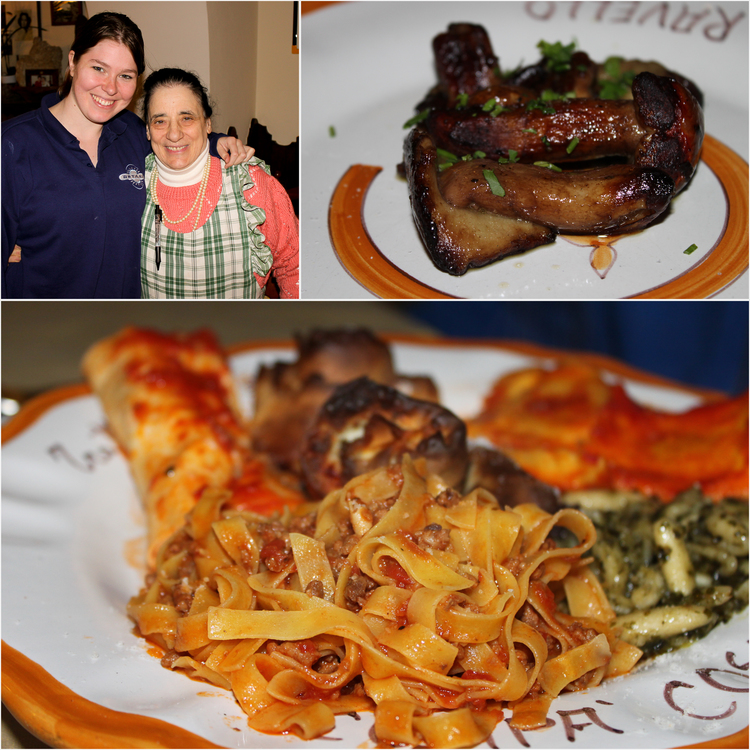 About 10 minute after sitting down, the owner herself came out to greet us.  In typical Italian fashion, she was extremely bossy, generous, and opinionated.  I loved it–not to mention, she was adorable with her pink sweater, frilly apron, and huge purple scrunchie (!).

And at the end of the meal, she came out with her change purse to give us the bill.  Too funny! 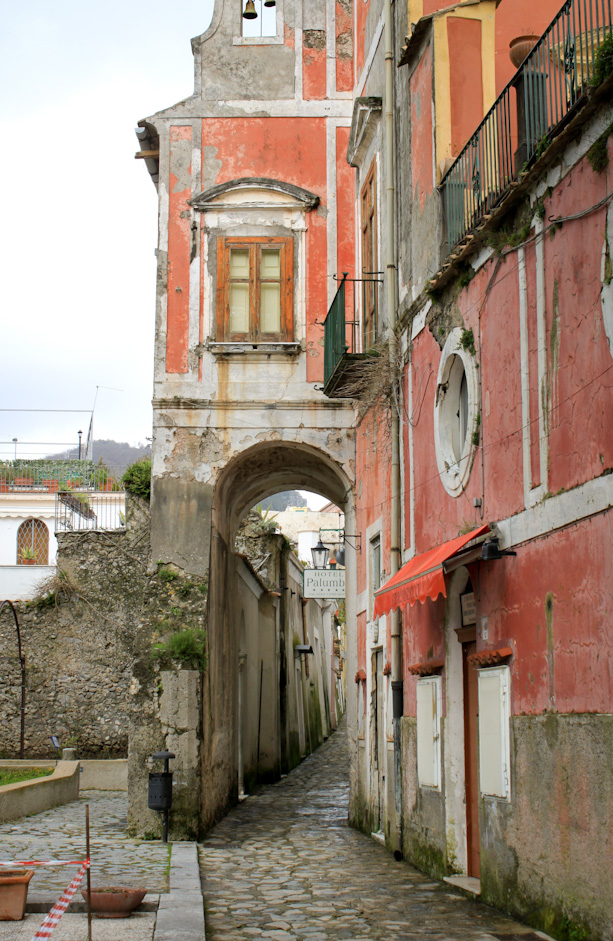 By that point, it was early afternoon and we decided to start heading back to the bus stop to return to Amalfi…

But first, we went to check out the new concert hall, Auditorium Niemeyer, which was just before the entrance to the town.  The building almost reminded me of the Sydney Opera House!  Unfortunately, it wasn’t open, but it was very cool. 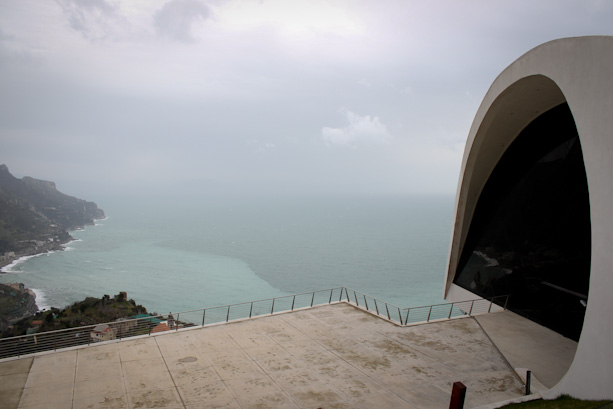 For some reason or the other, we ended up spending about an hour and a half waiting for the SITA bus to take us back down the hill to Amalfi.  And…at this point, it started to rain. 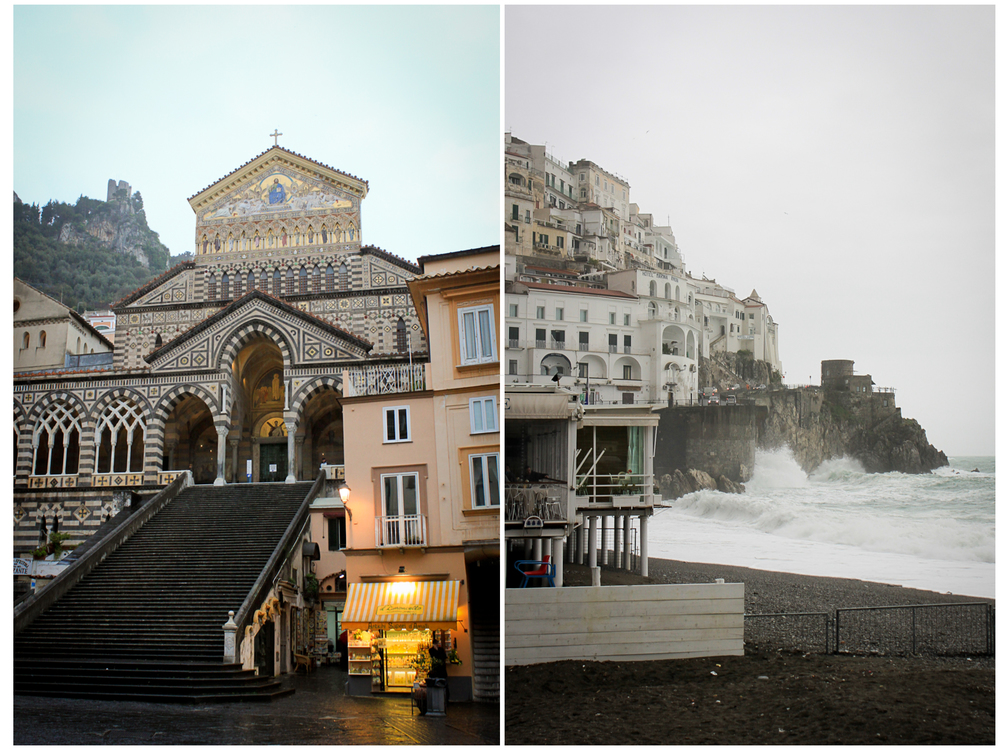 But at this point, after waiting so long and beginning to lose faith in Italian bus schedules, we decided to head back, walk around for 5 minutes (catch a glimpse of the beautiful Duomo-seen above), and take the next bus back to Sorrento…

This post contains affiliate links, which means that I make a small commission off items you purchase at no additional cost to you. Please read my privacy policy for more information.
« Previous PostExploring Sorrento
Next Post » Day Trip to Capri