I have officially survived the second practical exam and am back to update you all on Wednesday’s class!  I must admit, once I got into the kitchen, I realized that I had forgotten to put my camera in my pocket, so I don’t have any “in-process” photos, but it was still an eventful day! 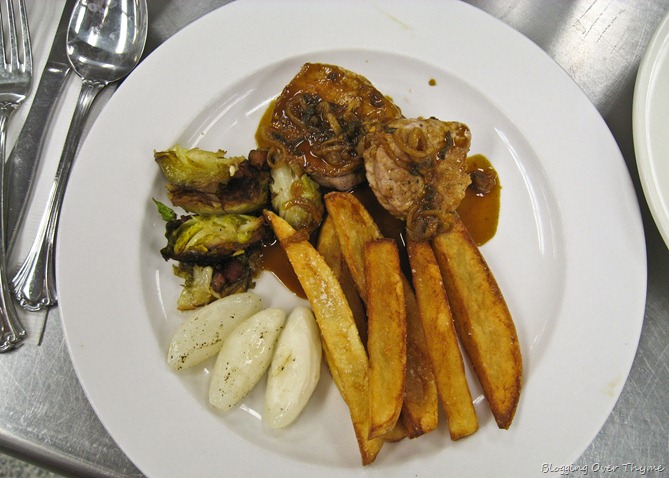 When I arrived on Wednesday, bright (actually its completely pitch-black outside…) and early, I was hoping that the day’s menu might be a little short, to give us a little breathing room for the next day’s exam.  Nope!  Guess again!

Our daily menu was even longer than usual and involved a lot of components that needed to be finished a la minute (at the last minute) before service.  As Chef Brian explained in class, this is something we will become all too familiar with as the weeks go on…

Our first dish of the day was mussels!  This was our first time cooking them in school and we made a very simple preparation with leeks and celery (finely sliced) cooked with white wine.  I’m not sure I was a huge fan of the celery addition, but apparently it’s a classic.  Luckily, this dish required little attention and not a ton of preparation. 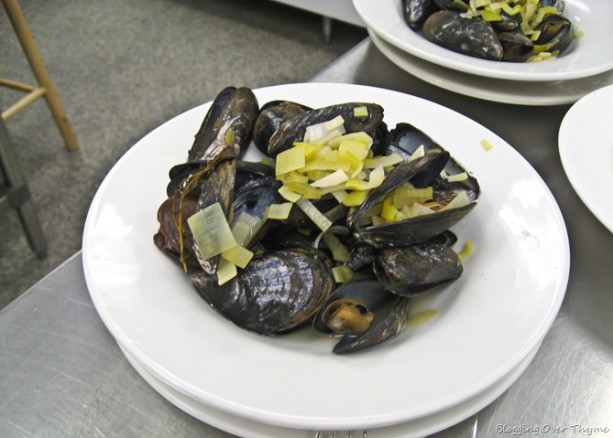 However, our main dish was the exact opposite.  We used some of the pork (butchered in the previous day’s meat class) to make pan-seared pork medallions, served with a jus made using pork bones, mirepoix, sage, and other aromatics, white wine, and veal stock.

Right before service, we made a quick pan sauce with shallots, garlic, sage, white wine, dijon mustard, and a little bit of apple cider vinegar.  To this, we added in the strained pork jus and allowed it to reduce a lot!

With our pork, we served three different things:

And for dessert, and extra practice for the following day’s exam, we tried our hands at making floating island once again!  Though this dessert involves a lot of components and needs to be plated at the last minute, I felt a lot better about it after the second time making it.  Our caramel was a tad too dark, but I personally liked it because it helped cut the sweetness of the rest of the dessert. 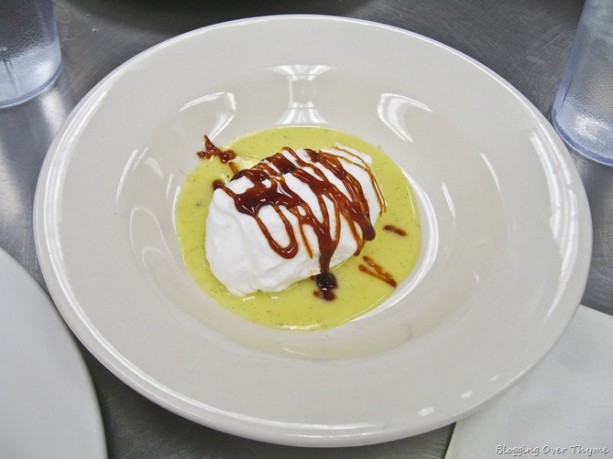 Our afternoon was filled with a review for the next day’s theory and practical exam…which I will tell you all about in an (upcoming) future post!

This post contains affiliate links, which means that I make a small commission off items you purchase at no additional cost to you. Please read my privacy policy for more information.
« Previous PostDay 28: Braised Duck Leg, Vicchyoise, & Souffle
Next Post » Practical Two: Behind the Scenes