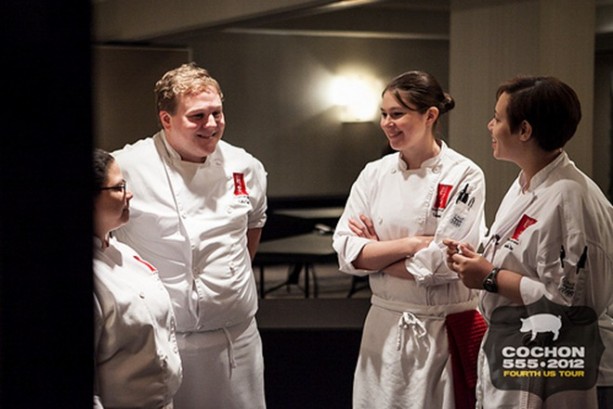 Weekend Update: I am back and have survived a very exhausting weekend! I enjoyed Saturday to the fullest knowing that I would be completely busy the rest of the weekend. On Sunday morning, I headed to the Cochon555 event in downtown DC and ended up leaving at around 10:00pm. Funnily enough, I ended up working with the winning Chef, Scott Drewno, from the restaurant, The Source. It was a very busy, eventful day, filled with a lot of delicious and unusual food. I also got to meet (or be in very close proximity) a lot of famous chefs.

For example, I tried a blood & chocolate ice cream (yes, you read that correctly…) on a chocolate-dipped cracklin (pork fat) cone! Very bizarre. But not bad either! Although I, personally, was not a fan of the cracklin cone… 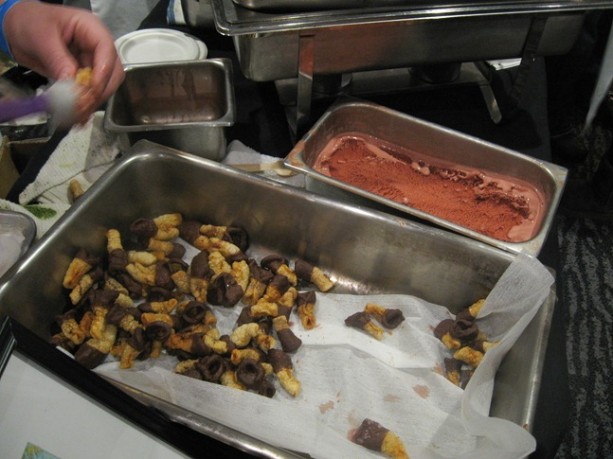 Once I got home, I immediately went to bed in preparation of my long stage the following day (noon-11:30 pm). I am happy to say that I got offered another externship position! I am still planning on staging at a few other restaurants before I make up my mind though….however, the deadline is steadily approaching (May 22nd).

I will try to post about all these experiences at some point soon!

I have to say, after getting home past midnight last night, the last thing I felt like doing was waking up at 5:15 am to go to school. It is probably the least I have ever looked forward to going! Though the first few hours I felt a little out of it, by the time service ended, the day was going a lot better than I had expected it too. We also found out our new partner—I will be working with Blanca for the next month! Despite us getting used to working with new people for the first time in a while, service went very smoothly. Always a good thing! 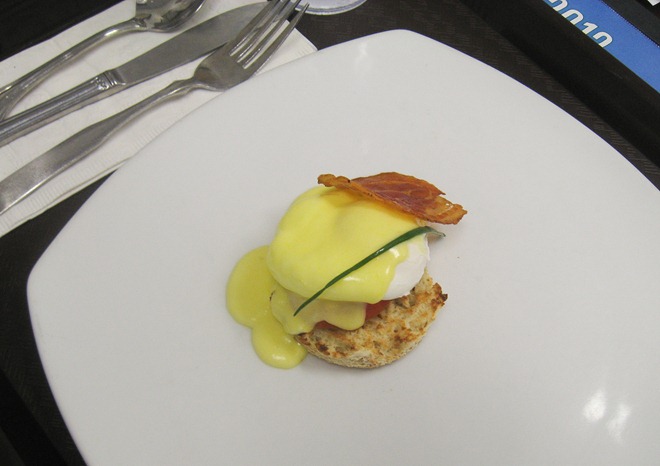 Our first course was eggs benedict “style”. This isn’t our first time making eggs benedict, but it was a much more refined version than the one we made in Phase I. For starters, we shaped the English muffin in perfect little rounds, and used pancetta—which we cut very thinly and crisped up in the oven—to replace the traditional Canadian bacon. We also added a bit of pan-roasted tomato slices as well, which added a nice touch.

Our main course was a millefeuille (“thousand layers”) of salmon. Basically, this dish involved layering blinis (Russian savory pancakes, which are traditionally served with crème fraiche and caviar), pan seared thinly sliced salmon, as well as sautéed spinach and mushrooms. Our sauce was a lemon and dill beurre blanc. To make our blinis a bit more interesting, we added chopped spring onion, roasted corn, jalapeno, and chives to the batter. 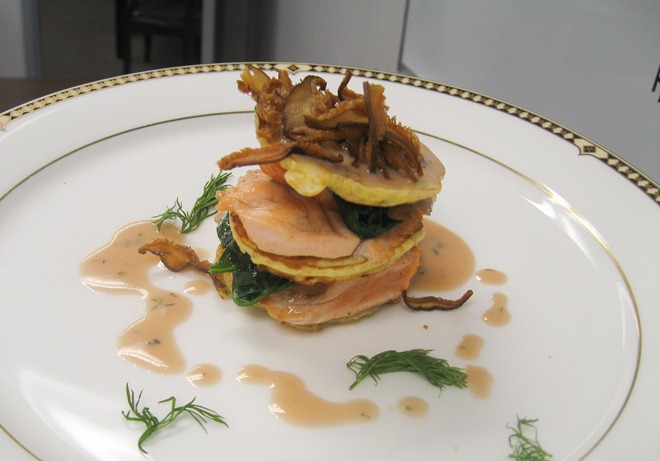 For a garnish, we fried some very thinly sliced shitake mushrooms. Though I’ve mentioned I am not a big fan of dill, this dish was pretty good!

And for dessert, we served fresh fruit (strawberries, orange supreme, and raspberries with a hot red wine sauce (excuse the blurry photo!). The sauce was made by combining red wine with a little bit of sugar and aromatics, including peppercorns, star anise, raspberry preserves, and a cinnamon stick. This was all brought to a boil and allowed to reduce and thicken a bit. Right before serving it, we added a small amount of port. I wasn’t sure what to expect from this dessert, but it was pretty good! We added a sprinkling of chiffonade of basil to make it a bit more interesting…oh yeah, and ice cream.

During the afternoon, we started preparing our main course on tomorrow’s menu, which involves pork belly. Should be interesting! We also have our first wine class tomorrow afternoon. We are all excited!

In an effort to make up for lost sleep, I am going to cut this post a bit short and head off to bed!

Hope everyone had a great and relaxing weekend!

This post contains affiliate links, which means that I make a small commission off items you purchase at no additional cost to you. Please read my privacy policy for more information.
« Previous PostInspiration in the Kitchen
Next Post » Day 63: Oysters, Pork Terrine, & Charlotte Aux Pommes