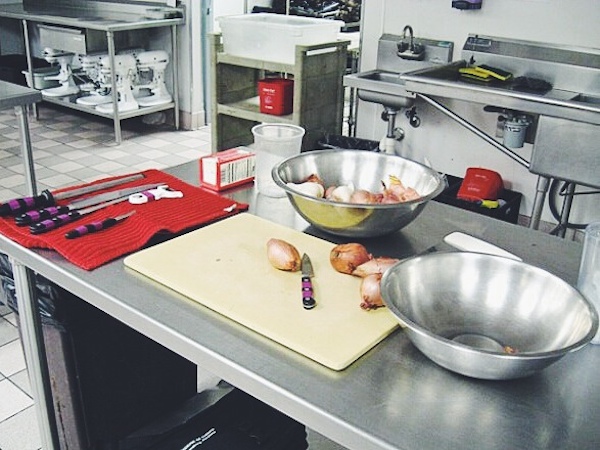 Did I enjoy it? What was it like? All of those nitty gritty details.

To give you a little bit of background, I came to the final decision to go to culinary school back in early fall of 2011 and enrolled in January 2012. After researching schools all over the country (California, New York City, you name it), I visited a smaller, top-ranked culinary school named L’Academie de Cuisine (LADC), which is located in the suburbs of Washington, DC.

I was instantly attracted to its small class sizes, intimate learning environment, and ‘no frills/real world’ attitude. They didn’t sugar-coat or glamorize the restaurant industry (as many of the other schools I visited appeared to do), and their curriculum was menu-oriented, as opposed to a standard block format. They said it like it was. 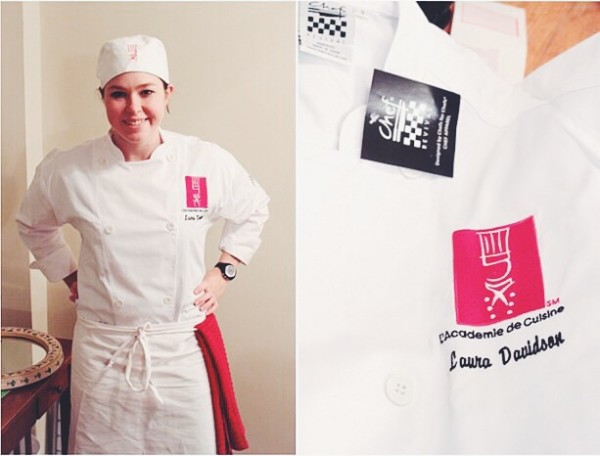 We made three to five-course meals every single day (including a dessert course). You never had a chance to get rusty at any one skill–for the most part–because you were doing so many different things every.single.day. The entire program was six months long, followed by a required six-month paid internship at a fine-dining restaurant.

When I headed to school on that first day, I had ridiculously huge butterflies in my stomach. I was excited and terrified all at the same time. I was worried I would crack under the pressure. I suddenly doubted my ability to do even the most basic kitchen tasks.  It sounds ridiculous, but the environment was intimidating.

Not to mention, there are a lot of stories about culinary school out there–stories about students sabotaging your food when you’re looking the other direction, you name it–and that was weighing on my mind as well.

Was I going to like my classmates? Was I going to stick out like a sore thumb? Were they all restaurant line cook veterans? I had no idea. 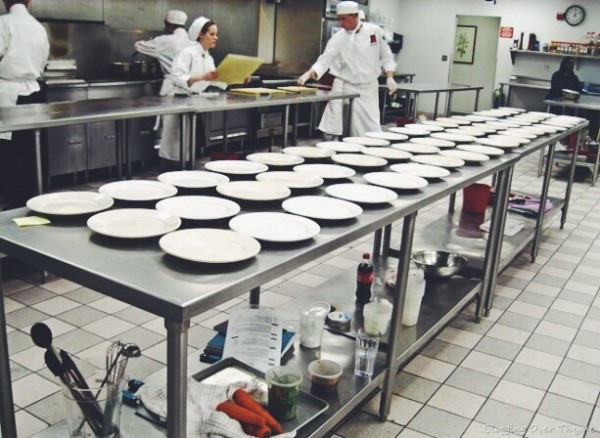 The first day of school, I cut myself twice and had to walk around donning two finger condoms for the rest of the day (mortifying, but pretty hilarious in hindsight).

I questioned my ability to make it through the program almost every day for the first month or so (despite being numerically at the top of my class). Just when I was beginning to get comfortable, our daily menus would increase dramatically, and we would be expected to make twice the quantity of food in the same amount of time.

It got particularly intense in the last three months, as we focused increasingly on plating and more intricate dishes (like the one below). Every little detail was scrutinized. There was always something. 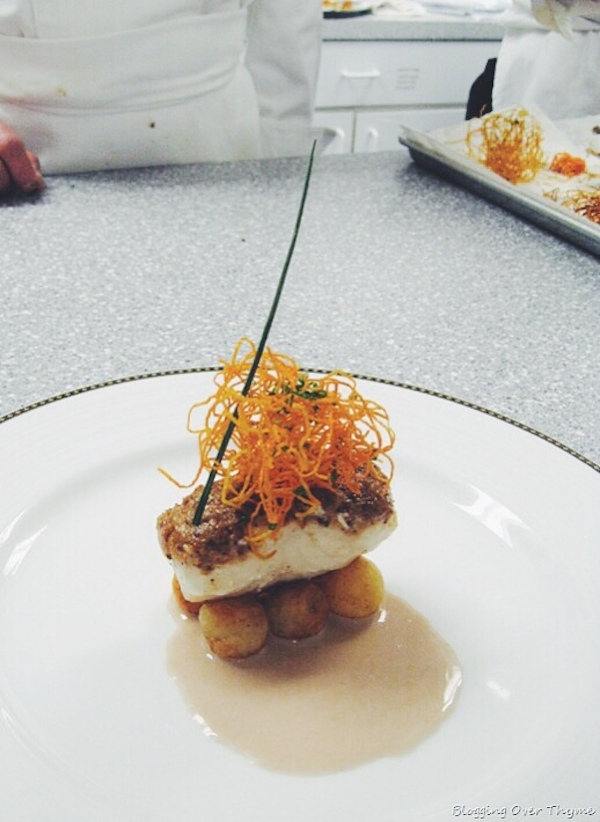 And as close and tight as my fellow classmates and I became, as time went on we also became increasingly competitive with one another. Not in a ‘sabotage your classmate’s dish’ kind of way (I never encountered anything like that! We were all incredibly close!), but in a ‘we all want to be the student to beat’ kind of way.

It was just the nature of the beast. 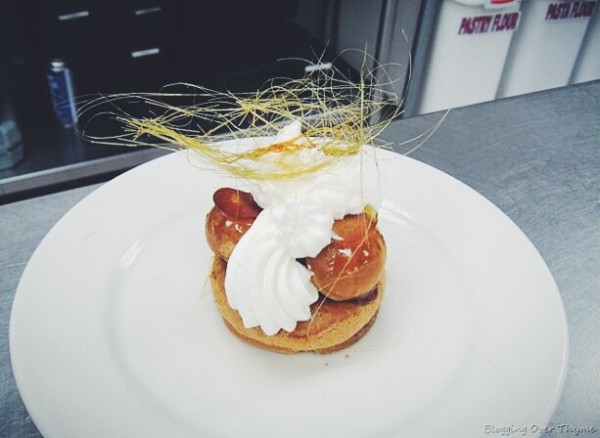 I think sometimes there is a misconception that culinary school is all fun. You get to learn how to cook and make amazing dishes all day long! How could it not be?

Well, it is not. Don’t get me wrong! It is an amazing, amazing experience. I made incredibly close friendships, and I would choose to do it all over again. And it was very, very fun. But…it is not all fun.

It is hard, manual labor. Most of the time you are dripping with sweat, and don’t even feel like eating or trying the meal that you just labored over meticulously. It is not like cooking at home, and it is very, very fast paced. It was the hardest (both mentally and physically) experience of my life.

You’ll wake up at 5 am, trim chicken fat from bones (for stock), clean out the gunk from the stock pots, fight your classmates over the best pots, take out the trash, mop and scrub the floors at least once a day, and wipe down every last gas burner range. And more. I genuinely believe that these not-so-fun elements of the experience are just as important as the ‘fun’ parts, particularly if you want a realistic expectation of what it will be like to work in a restaurant kitchen. You can’t have one without the other. 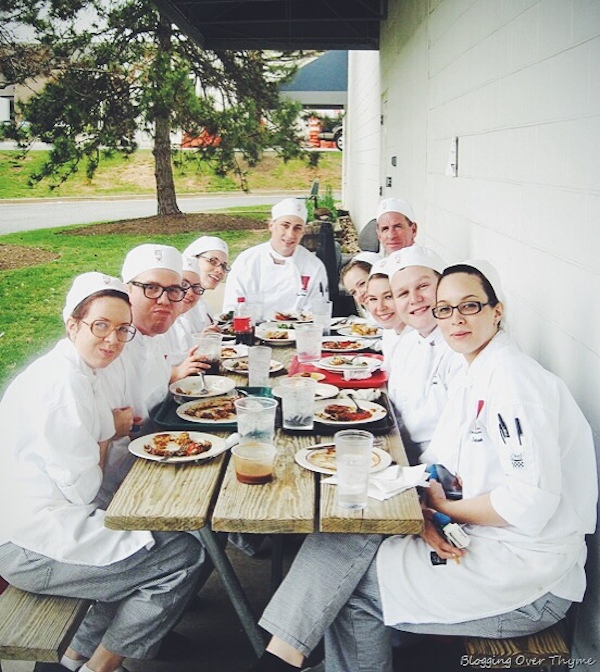 I truly believe that a huge element (if not, the biggest element!) of culinary school is simply learning how to work in a restaurant or production kitchen. How to move, how to be efficient, how to use equipment, how to behave…you name it!

I can honestly say that my biggest gripe about culinary school was that I wished it had focused more on the ‘whys’ of cooking–rather than simply the ‘hows’. We certainly touched on these subjects in depth on occasion, but the primary focus was cooking and how to learn how to cook ‘on the line.’ I think this will change over the years as people seek alternative jobs in the industry, but for now, that seems to be the focus.

Do I think culinary school is worth it? Well, that’s a question for another day! Stay tuned…

This post contains affiliate links, which means that I make a small commission off items you purchase at no additional cost to you. Please read my privacy policy for more information.
« Previous PostBain Marie Scrambled Eggs with Roasted Tomatoes and Goat Cheese
Next Post » Fried Cauliflower Steaks with Honey and Hot Sauce