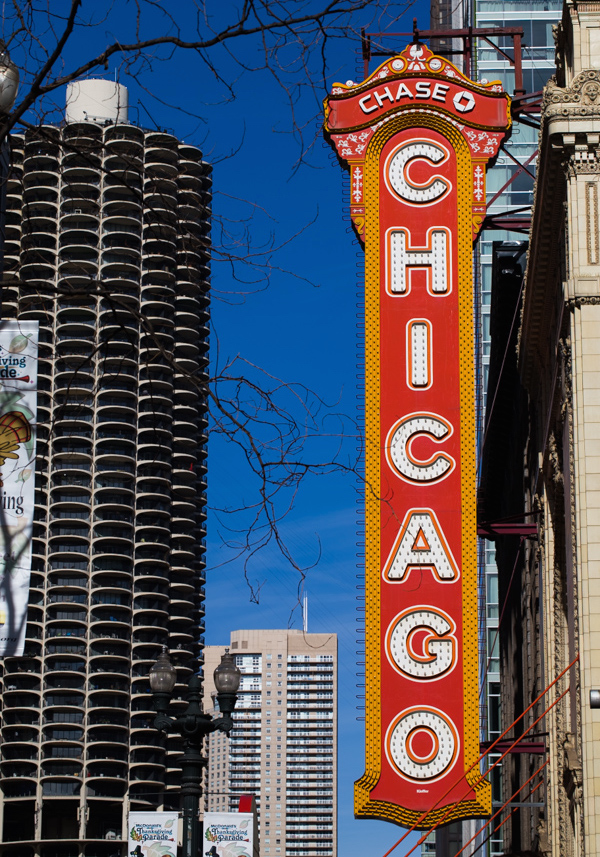 The day has finally arrived! I couldn’t help but spill the beans on Instagram, but to catch you all up, last week was a whirlwind of emotions, excitement, and news!

It’s hard to fully explain the ‘Match’ process to anyone that hasn’t gone through it before, but to say the least, it is an insane experience. It is one of those “do you have 45-minutes to spare?” type of conversations. Although we knew this day was coming a few years ago when Connor first started medical school, I never expected it to creep on us so quickly.

Last year, at this time, we were just beginning to think of places where we might want to apply for residency, and more importantly, where Connor should plan on doing away orthopaedic surgery rotations (essentially month-long working interviews to increase your odds of matching for residency). The summer and fall were a blur. Connor was everywhere from Chicago, New York City, to San Francisco all in the span of four months.

Connor ended up being gone almost all of January for interviews across the country, and in February, we officially submitted a list ranking our first and last choices for residency (Chicago was his first choice!). To make a long story short, you rank where you have been interviewed, the places where you interviewed rank you, and an incredibly complicated computer algorithm puts it all together and spits out the result.

Last Monday (‘Black Monday’), we anxiously awaited to hear the news of whether or not he had matched into orthopaedic surgery. Surprisingly, I actually felt extremely calm last weekend and felt very confident going into Monday, but some last minute nerves crept up that day. At exactly noon, Connor received an email at the hospital and immediately texted me the good news, “MATCHED!!!!!” It was a huge weight off of both of our shoulders, particularly for Connor, since this was an especially competitive year for applicants and several of his friends were not as fortunate.

The cruel part? We had to wait four more days to find out WHERE he had matched! At this point, we knew it would be one of nine cities where he interviewed: Chicago, New York City, San Francisco, Boston, Baltimore, DC, Albany, Kansas City, or Detroit. So, as you can tell, there was still a lot up in the air at this point!

The next four days went by painfully slow, but we tried to distract ourselves and just be grateful that Connor would, no matter where we ended up, be heading into a career he loves and is so passionate about.

Friday, otherwise known as ‘Match Day’, finally arrived, and my parents and Connor’s parents joined us on campus for the big event! His entire medical class, and any accompanying friends and family, congregated in a large auditorium on campus to receive the news.

Surprisingly, I slept well the night before and felt very calm on Friday morning, but the minute we headed out of our apartment to drive to campus, the nerves started and our stomachs were in knots. At every medical school around the country, students come together at the exact same time to be handed envelopes telling them where they will be heading for residency.

I’m not gonna lie, I’m a total control freak at times, so the uncertainty of the next five years has been really stressful over the past year. Add wedding planning to the mix, taking the leap towards self-employment, and um…let’s just say, it hasn’t always been pretty. 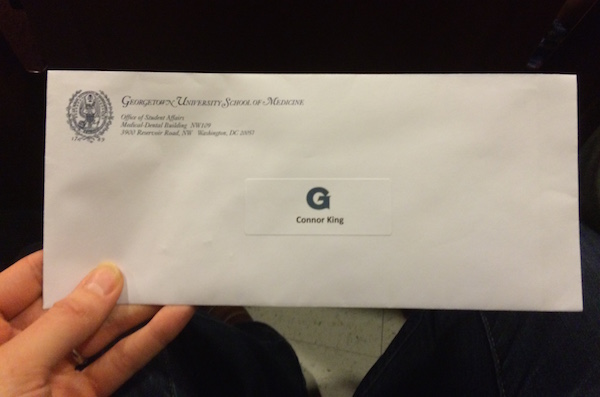 A few minutes before noon, one of the doctors finally got up on the stage, told all of the medical students to line up to get their envelopes, and head back to their seats (without opening it, of course).

The entire auditorium smelled like fear, anxiety, and sweat. Meanwhile, I was standing at the back of the room fanning myself like a idiot, and trying to contain myself. Connor got back with his envelope, and of course, I did the next logical thing: grab it and try to read through the envelope [which was not possible.] 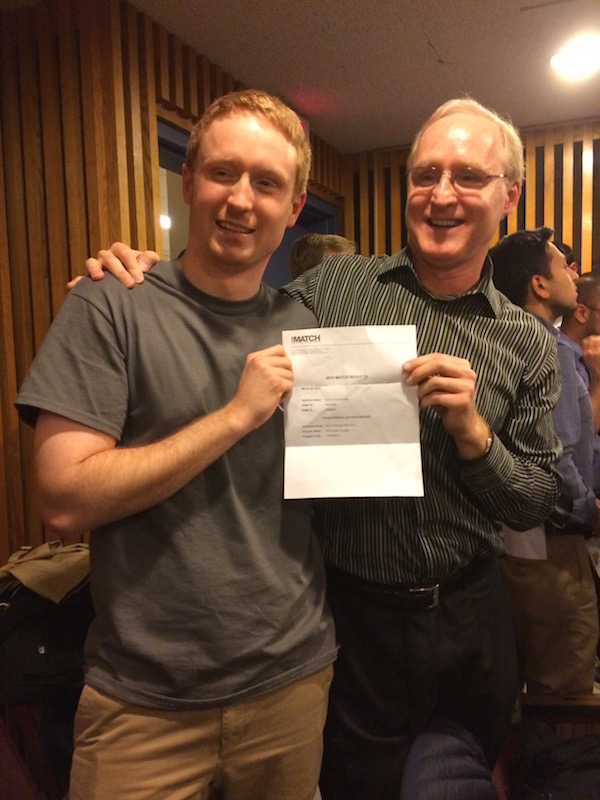 The doctor gave a little speech about the Match results, some vague clues as to which cities people were heading to (aka. torture), and then finally started the countdown to open the envelopes.

The entire experience could not have been more dramatic! Exciting, but oh my god, so dramatic. At this point, I felt like I was going to vomit. Truth. The video definitely captures the energy in the room!

Thankfully, Connor’s dad, John, had the idea to take out his smartphone and videotape the ‘letter opening’ moment! Here are a few snippets of it–as you can tell, I was in a state of shock, and pretty soon after this, I was unexpectedly bawling my eyes out. [That part was edited out for your benefit.]

As you can probably tell, the big news is that we’re officially moving to CHICAGO!!! For the next five years! We’ll be moving in mid-June at the latest, following the wedding, Connor’s graduation, and our honeymoon. Words cannot express how proud I am of Connor for all of his hard work over the past four years, and I’m even prouder that he matched into his first choice. The move comes with a lot of emotions. Excitement, nerves, and sadness at leaving Washington, DC, as we both have been here for almost our entire lives and most of our closest friends and families live in the area. But we’re both very excited to experience and explore a new city, and mix things up!

I’ve only spent 72 hours in Chicago (and well, barely more than that in the entire midwest region) in my entire life, but from what I did see, I have a feeling we will love it there. More importantly, I get to fulfill my dream of trying everything on XOCO’s menu. Oh yes.

Can’t wait to tell you more in the coming weeks, write about our experiences in a new city, and share this next chapter of our lives with all of you! I already have all sorts of new ideas for fun content (a new column, perhaps?).

Thank you all so much for your support and patience during these past few weeks, and in the hectic weeks ahead! Hugs!

[Oh, and if you live in Chicago or surrounding area, let’s be friends in real life. Ok, thanks!] 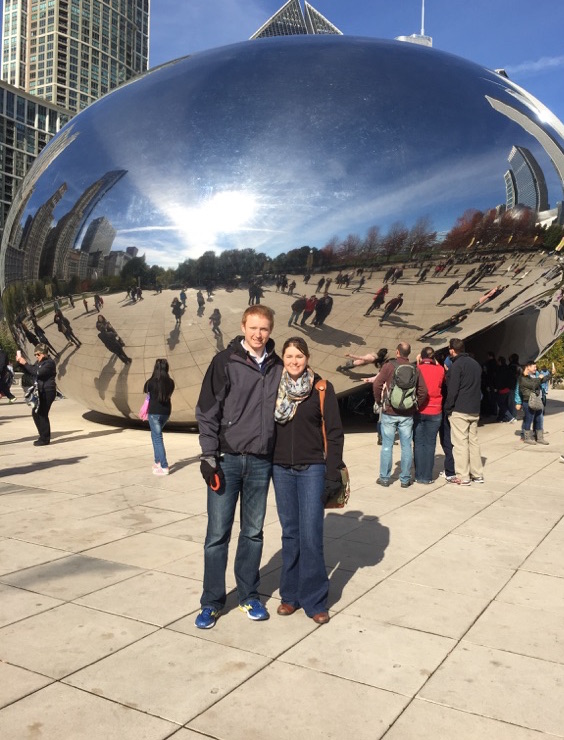 This post contains affiliate links, which means that I make a small commission off items you purchase at no additional cost to you. Please read my privacy policy for more information.
« Previous PostThe Sunday Thymes
Next Post » Carrot Cake Scones with Maple Cream Cheese Glaze