Home » none » The Ginger-Scallion Noodles that Never Were

The Ginger-Scallion Noodles that Never Were

Last week, I took an uncommon trip to my local public library to peruse the cookbook section for some inspiration.  After checking out all of the options, I ended up trudging an awkward and incredibly heavy stack of cookbooks over to the instant check out station.  Scanning my dusty library card, I looked to the screen to see the following alarming message “Your library account has been temporarily frozen due to unpaid library dues.”  Freaked out, I racked my brain to try to come up with when I had even been to the library last…it had surely been over a year, of that I was fairly certain. 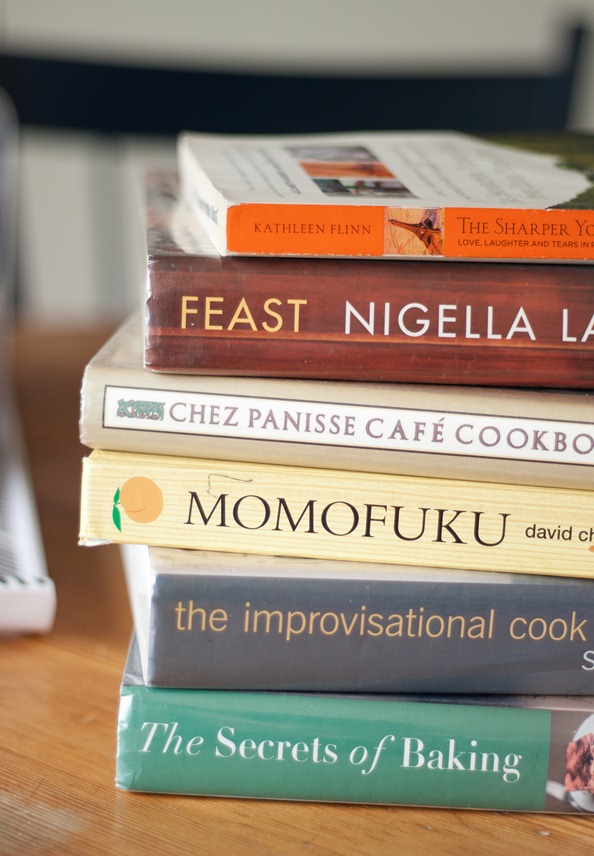 Then the next terrifying thought occurred, “Oh my god, I must have forgotten to return a book and probably have thousands of dollars in fines.”  At that point, I contemplated abandoning my stack of books and running out of there and never coming back (yes, Laura the library fugitive).

Instead, I bravely approached the help desk, mentioned the fact that my card “appeared” frozen, and waited to hear the news.  Just as I was beginning to regret my decision not to run and bracing myself for some bad, bad news, I heard the woman say, “You currently have…$2.60 in late fees.”  I have never been more relieved. 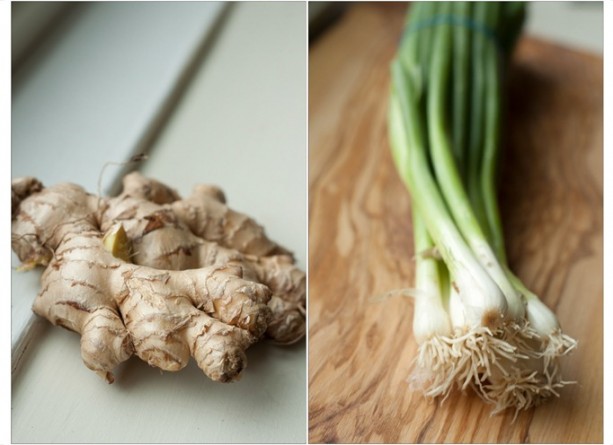 The next few days were spent poring over my new borrowed cookbooks.  I was especially excited to look through The Momofuku cookbook.  I figured there would be tons of delicious recipes to choose from.  One reason I love checking out books from the library is to see whether or not a cookbook is worth investing in.

While I can’t say that most of the recipes in The Momofuku cookbook are exactly home-cook friendly (either because they are super time consuming or require ingredients that are pretty difficult to find), I was intrigued by a recipe for Ginger Scallion Noodles–mostly because it sounded like something I could actually accomplish and make that very night. 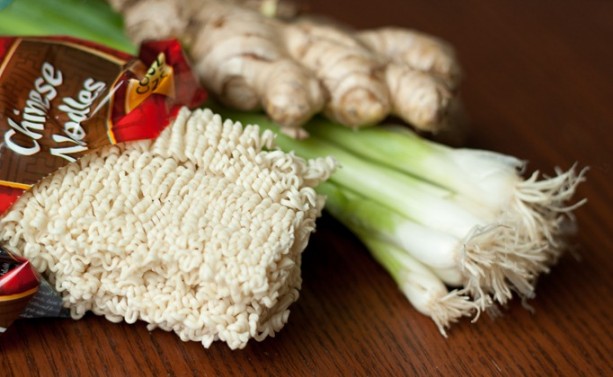 It consisted of making a really simple ginger-scallion sauce made up of freshly chopped ginger, tons of sliced scallions, a little bit of soy sauce and oil, and sherry vinegar, which would then be topped on some ramen noodles.  So simple!

In the end, it was less of sauce (see below) and more of a relish, in terms of consistency. It called for 1/2 cup of finely chopped ginger, which sounded like a lot, but I went with it.  I was a bit worried, but figured that it had to be good in order to be considered one of his favorite go-to simple meals in the cookbook. I then let it sit in the fridge for a bit to develop in flavor until dinner.

Fast forward a few hours…I had just finished cooking up a large batch of ramen noodles and tossing them in the ginger-scallion sauce.

I asked Connor to be the first taste-tester.  It still looked pretty promising at this point… 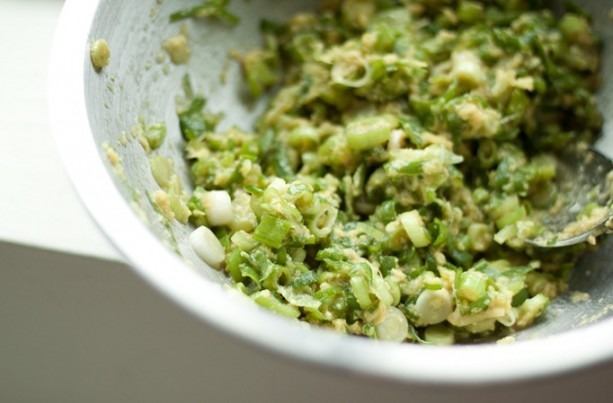 His response? ”It’s good…” (read: it’s really not that good, but I don’t want to hurt Laura’s feelings, even though it is not her recipe and I know she can totally read through this…).  I braced myself for something that was so-so.

Instead, I was assaulted by an overwhelming amount of fresh ginger.  There are good amounts of ginger, and bad amounts of ginger, people.  This was the latter.  So bad, that I was already contemplating what else I could make for dinner, since I did not want to eat it. 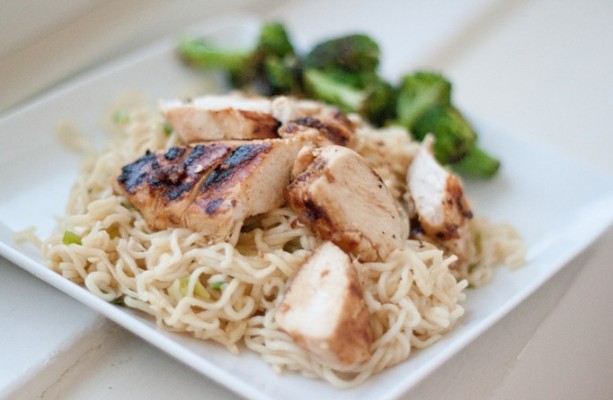 I quickly did the next logical thing…Google “reviews of ginger scallion noodles + Momofuku cookbook”.  I was expecting to find similar experiences, but it appeared that everyone loved it!  Honestly…I still don’t know what went wrong. In hindsight, I think it might have been my decision to microplane the ginger, as opposed to finely chop it. I’m pretty sure that a 1/2 cup of microplaned ginger is equivalent to like ten cups. Not good.

Oh yeah, and after Googling, I rinsed the dressed ramen noodles under the sink…like a weirdo.  And then I ate a bowl of cheerios for dinner. Connor, on the other hand, chose to eat the subdued-in-flavor rinsed noodles.  I can’t even make this stuff up!

The next day, attempting to repurpose leftovers and at least justify the $6 dollars I had spent on completely overpriced ramen noodles, I decided to make a quick soup before heading to work. Somewhere between stirring my soup and plating my lunch, this happened… 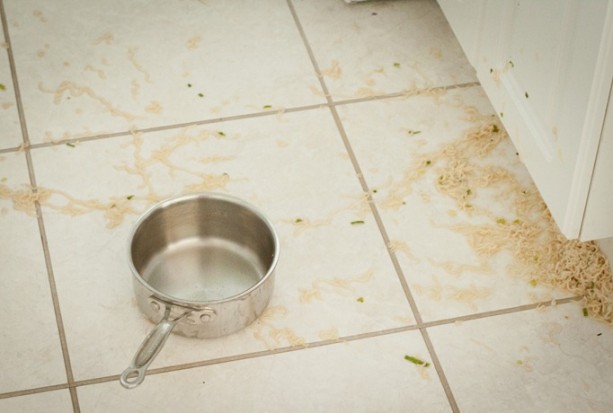 The next twenty minutes were spent wiping down every crevice of my kitchen cabinets, picking up various ramen noodle scraps, nursing a newly acquired bruise on my ankle, rinsing my now chicken-broth-covered-bare feet in the bathtub, and cleaning my flip-flops. 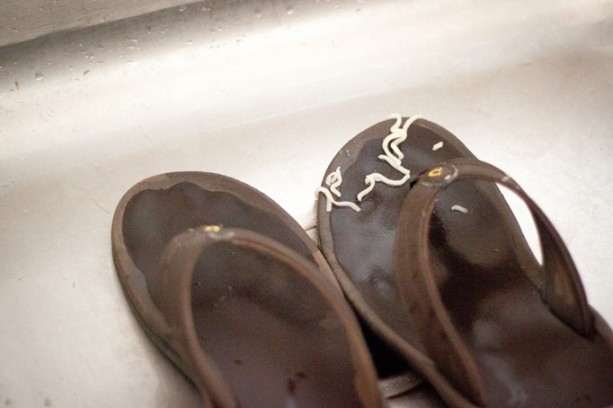 This post contains affiliate links, which means that I make a small commission off items you purchase at no additional cost to you. Please read my privacy policy for more information.
« Previous PostHearts of Palm Dip
Next Post » Fried Green Tomatoes

4 Comments on “The Ginger-Scallion Noodles that Never Were”