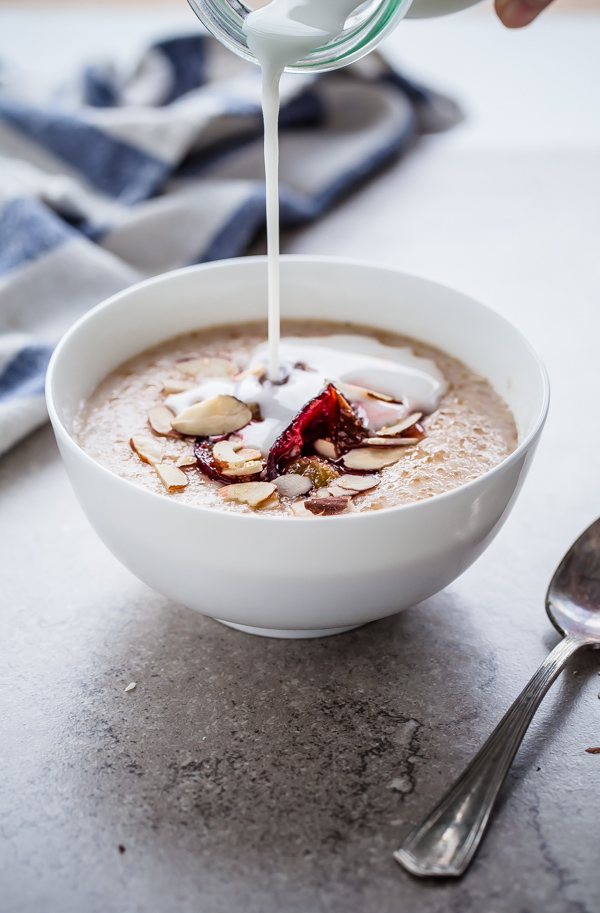 If I were going to list my all-time favorite breakfasts ever, this broken farro porridge would definitely be near the top of the list. Top five, for sure.

And that is saying a lot, because I don’t normally consider myself an oatmeal or porridge person. I’m not even sure if oatmeal or porridge fanatics love it that much. Omelettes? Definitely. Waffles and pancakes? Of course! Runny eggs? Yes, the answer is always yes.

Porridge better be really special if it wants to compete with all of the other amazing breakfast foods out there, and you guys, this farro porridge is special. 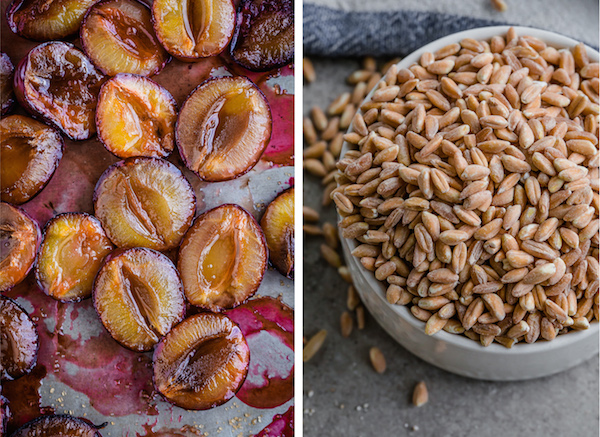 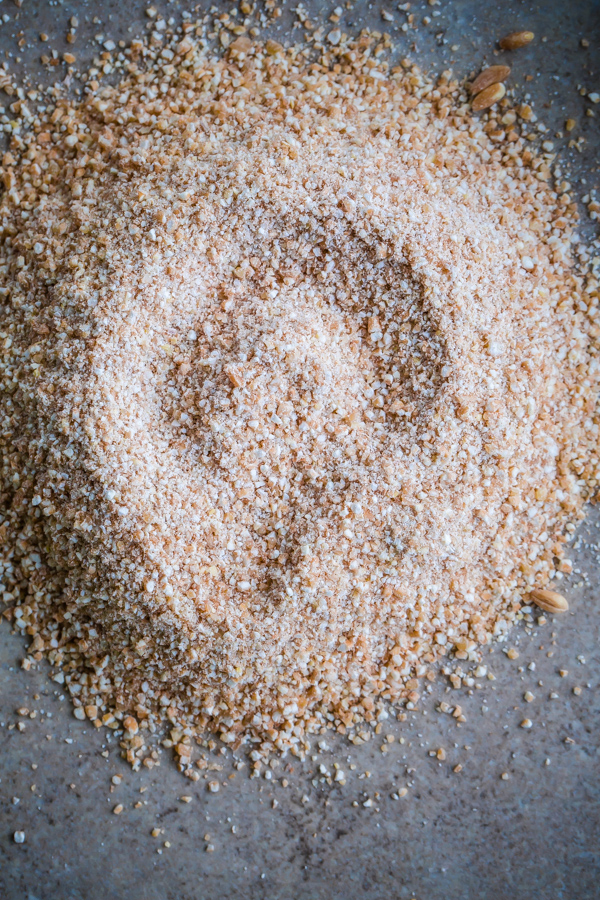 As is the case with many of the recipes on the blog, this one was inspired by a meal at a restaurant. Broken farro porridge is a dish served at Il Cane Rosso, a small order-at-the-counter cafe in San Francisco’s Ferry Building. It is one of their signature items, and rightly so.

Truth time? I only spent one full day in the city on my trip to San Francisco in August, and had a mini breakdown when we almost missed their breakfast window (breakfast is only served before 10:45 AM, and we arrived at the Ferry Building exactly five minutes before that). 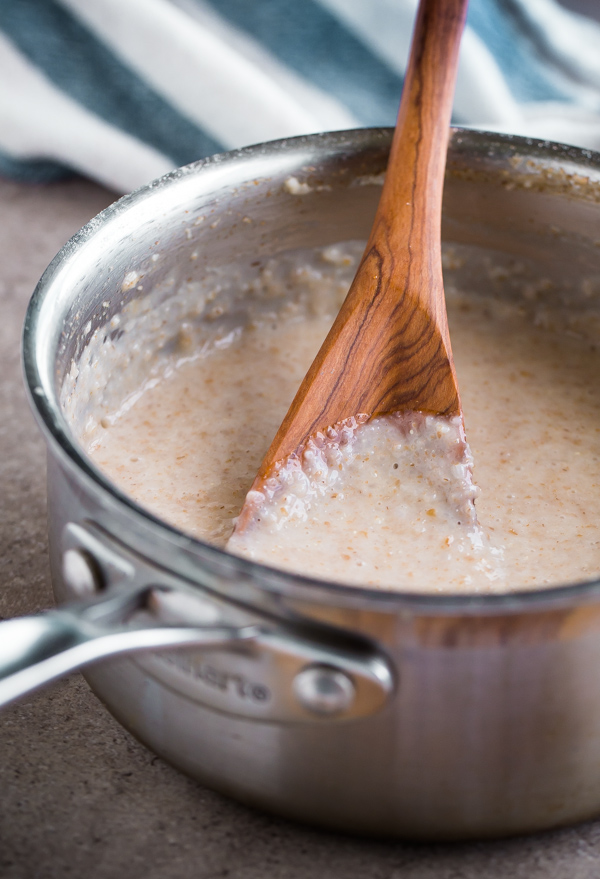 Thankfully, we got there just in time and I savored every spoonful of the stuff. The trick to this amazing porridge is the broken farro. If you’re unfamiliar with it, farro is a variety of wheat that has become relatively popular over the last few years.

As the name suggests, it is literally broken. Ground to a relatively fine grain, which allows it to gain the creamiest of textures when cooked, but not so much so that it still retains great texture.

Since farro is only available in whole grain form, I’ve found that the best way to grind the farro yourself at home is using a high power blender (I used my Vitamix) or food processor. The good news? You don’t need to travel to San Francisco anymore to try it yourself. 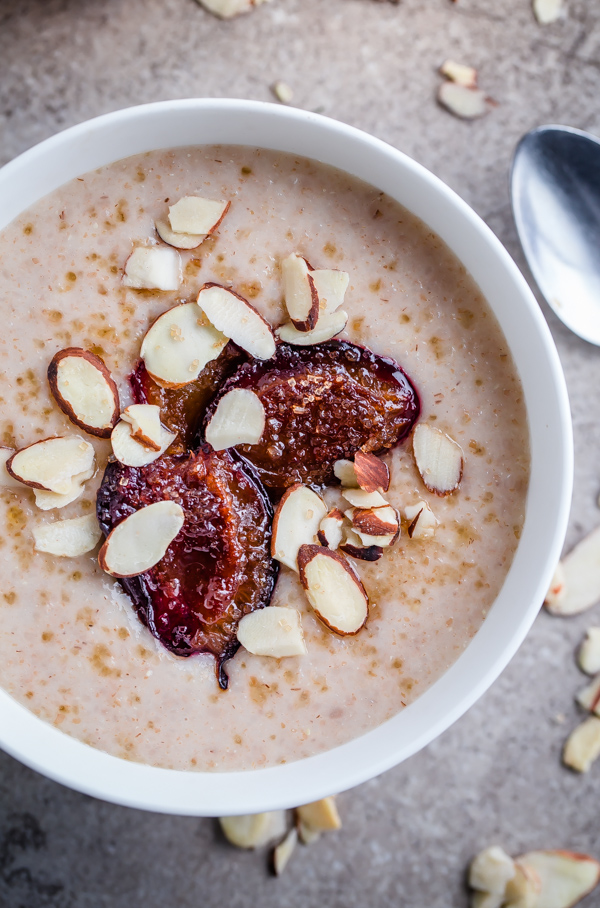 Il Cane Rosso’s broken farro is served beautifully, but very simply. The original comes with raisins and is topped with chopped toasted almonds. Although I love that version and would gladly have it every day of the week, I decided to change a few things myself without messing with the integrity of the dish.

The porridge itself is made by boiling water and slowly pouring in the broken farro, similarly to how you make polenta or grits. After the farro is completely cooked, you whisk in light coconut milk, a touch of maple syrup, and lots of vanilla extract. The coconut milk helps make the porridge extra creamy, and the vanilla and maple syrup add just enough sweetness and flavor. (Also, it’s vegan!)

I decided to top the whole thing off with roasted Damson plums, which are only available a few weeks out of the year, and are showcased best as a preserve, roasted, or stewed.  I’m clearly on a plum streak, but in all honesty, the tartness of the plums complements the porridge really well.

If you can’t find them, free to leave this part of the recipe out or substitute with this delicious roasted plum compote. It tastes just as good either way! 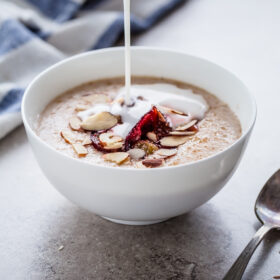 Inspired by Il Cane Rosso in San Francisco. Farro porridge can be made up to a week in advance and kept in an airtight container in the fridge (and reheated in the microwave to serve).
Serving: 1serving, Calories: 396kcal, Carbohydrates: 81g, Protein: 7g, Fat: 8g, Saturated Fat: 6g, Polyunsaturated Fat: 1g, Sodium: 286mg, Fiber: 7g, Sugar: 58g
Author: Laura / A Beautiful Plate
Course: Breakfast Grains and Granolas
Cuisine: American
This post contains affiliate links, which means that I make a small commission off items you purchase at no additional cost to you. Please read my privacy policy for more information.
« Previous PostRoasted Beet Peach and Burrata Salad with Basil Oil and Candied Pistachios
Next Post » Pomegranate Moscow Mule