Besides accidentally leaving my (priceless) notebook at school, Monday’s class was a relatively straight-forward and smooth day in the kitchen.  It is always a bit of a relief when I look at a manageable menu on the whiteboard in the morning, but also a bit nerve-wracking, because I can’t help but wonder what the next day has to offer! 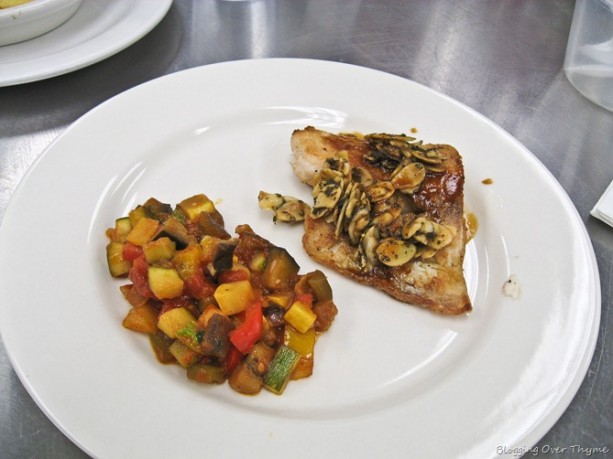 Lecture and production combined new and (revisiting) some old techniques.  Our main dish was another variation (known as a derivative or small sauce) of meuniere, which is a pan sauce made from whole butter, which is lightly browned, finely chopped parsley, and finished with lemon juice.  So far, we have made grenobloise, which has the addition of capers and croutons.

The day’s variation, called AMANDES, is identical to meuniere, but has the addition of sliced and toasted almonds.  And lots of them!  Instead of working with trout and flounder, we worked with…tilapia!  This dish continues to be one of my favorites so far in the program, so I was happy to see it on the menu again.  I am looking forward to making this at home—but need to figure out a way to make demi glace, which is proving a bit difficult.

With our tilapia, we also served ratatouille, which we learned how to make for the first time last week.Our chef wanted us to make a more rustic variation and make lots of it—because we are using the leftovers for this Saturday (an open house at the school—with lunch provided) and a required make-up day for us. 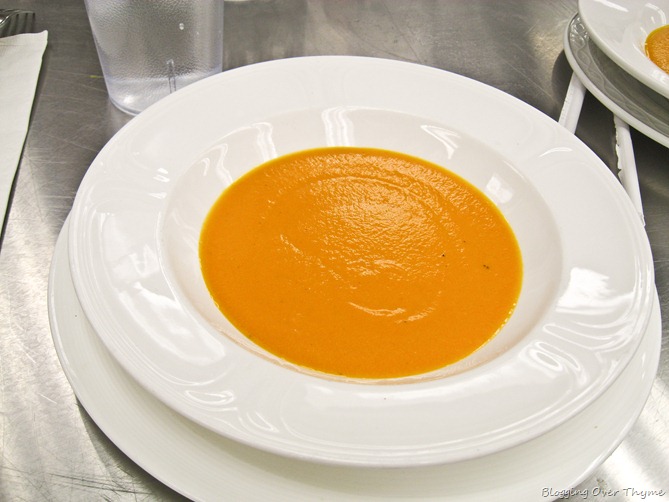 In addition to our tilapia, we also served a new soup—specifically a POTAGE CRECY.  We have already made several different potages (a refined soup that is started with leeks), but this was probably my favorite so far.  As you can probably guess from the color, it was a carrot soup, which was flavored with lots of ginger.  Specifically, ground, fresh, and crystalized ginger, which was pretty interesting!

It all ended up being pureed in the blender and passed through a chinois to make extra smooth.  Right before service, we added in a small amount of heavy cream to add a touch of richness.  The color was beautiful and it really was a very simple dish, but full of great flavor. 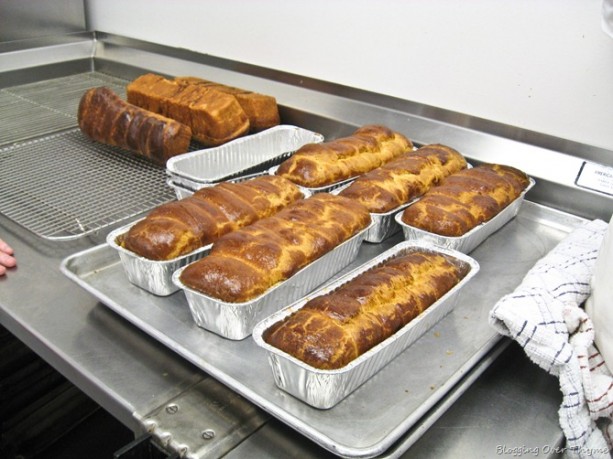 Last, but not least, we made a PAIN PERDU (bread pudding).  Except it wasn’t just any old bread pudding, but one made with leftover brioche bread that we learned how to make last seek.

Essentially an egg-filled bread dipped into a rich eggy custard = rich and very delicious.  The addition of rum soaked raisins made it extra special.  Despite being great, my jaw did kind of drop when I saw that we would be using more than 2 cups of half and half (literally 50% whole milk; 50% heavy cream) to make the custard.  Holy arteries! 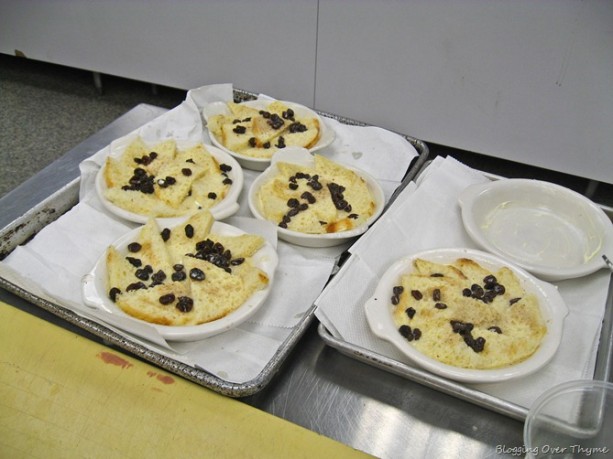 This all went into the oven and got baked in a water bath for about 25 minutes.  We have already made so many forms of custards—it is pretty amazing when you think about what the simple combination of eggs, sugar, and milk/cream can accomplish. 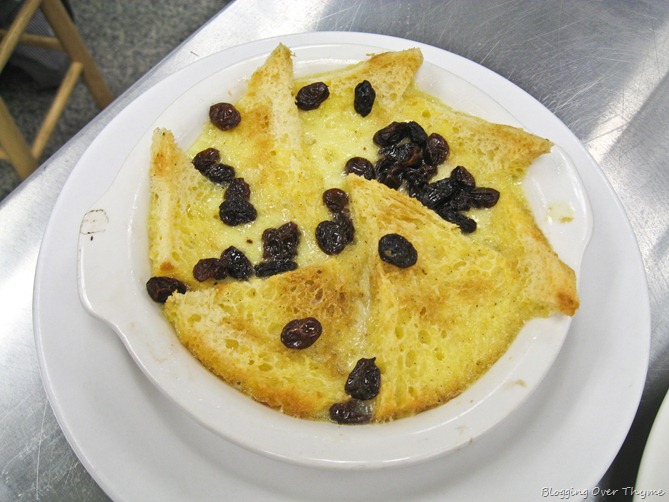 Once we served lunch, we got to work cleaning the kitchen before having another quick lesson in the afternoon.  The day’s agenda was learning how to turn artichokes, which simply means how to remove the heart and clean it nicely for presentation.

As you can probably tell from the picture below, the left artichoke is completely intact and the one at the right is a artichoke heart that has been removed carefully with a pairing knife (lemons were kept on hand to prevent oxidation/browning).  I’ve only cooked artichoke whole in the past, so this was a pretty fun technique to learn how to do. 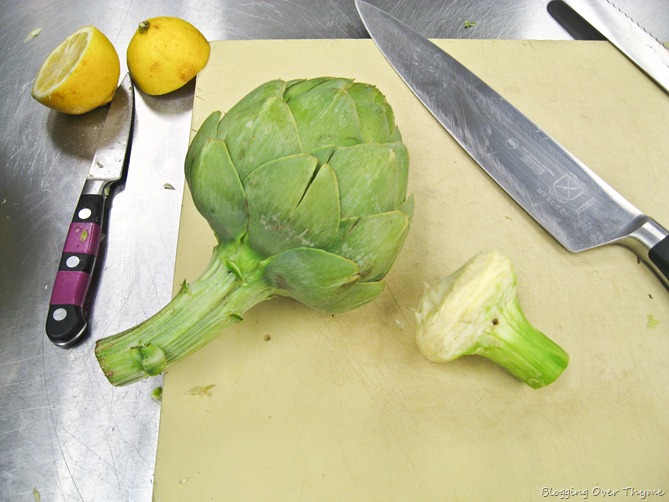 After removing the hearts, we cooked them in a BLANC, which is a classic method for cooking and storing artichokes.  A blanc is simply a combination of water, flour (roughly 2 tablespoons) and lemon juice for acid.

The blanc makes the artichoke hearts tender—and the flour prevents light from hitting the artichokes, as well as supposedly improves and adds flavor.  Since we weren’t going to be using our cooked artichoke hearts until the next day, we stored them in our blancs in the fridge overnight. 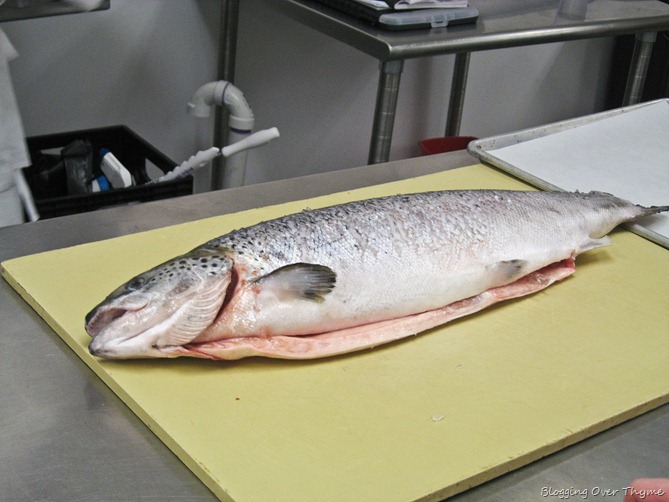 Chef Brian also did a quick demonstration on how to break down a whole salmon (this one was about 8 lbs).  Apparently in Phase II, at some point, each of us will be breaking down an entire salmon ourselves, but for now, it was simply to show the technique.

Pretty cool to watch the whole process!   Unlike our flounder bones, salmon bones are not suitable or saved for stock-making.

After fileting the fish, Chef Brian rubbed them with equal parts kosher salt and brown sugar, which prepares and cures them for SMOKING—yes, we are actually smoking this entire fish to serve at the open house!  Hmm…I love smoked salmon. 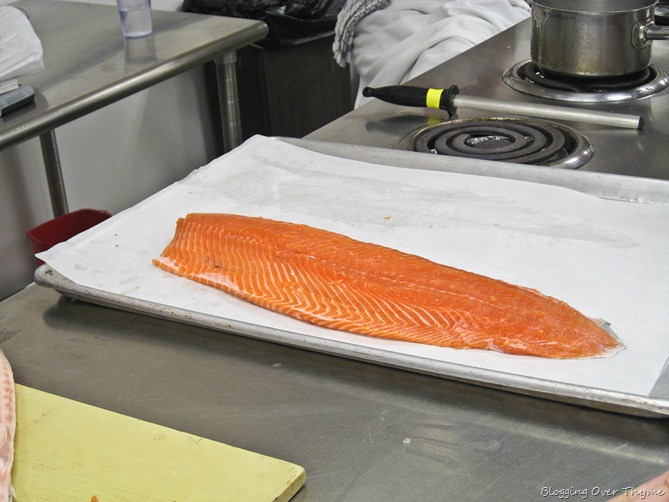 Luckily, I have completed my paper ahead of time (which is due Thursday), so I’ll be back soon with another update on today’s class.

Hope you all had a great weekend and Valentine’s Day!

This post contains affiliate links, which means that I make a small commission off items you purchase at no additional cost to you. Please read my privacy policy for more information.
« Previous PostDay 22: Grilled Scallops, Madeira Sauce, & Palmier Cookies
Next Post » Day 24: Artichoke Salad, Chasseur, & Napoleon