So glad that you all enjoyed my latest post about our field trip to Ayrshire Farm last week!  And now back to regular programming! 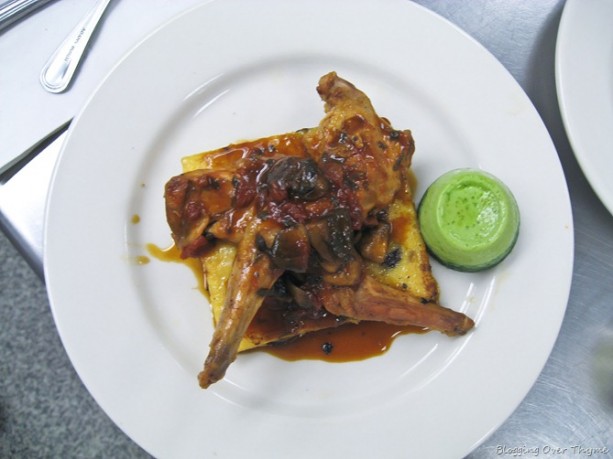 I’d love to say that yesterday’s class was filled with delicious creations, but I would be lying.  It was bound to happen at one point!  I can honestly say that nothing on the menu was appealing to me at lunchtime.  To keep you guys interested, I’ll start this post by talking about the better dishes of the day…

This was our first time cooking rabbit or any kind of game in class.  I have had rabbit a handful of times before, but never cooked it before now.  We made this is a very similar way to all of our other braised meat stews, but prepared a chasseur sauce (we have made this once before).  Chasseur sauce contains chopped tomatoes, tarragon, and sauteed mushrooms.  I’ve decided I may not be that averse to tarragon after all!  I think it depends on the dish…Not a big fan of bearnaise, but this sauce is good.

The first item on the agenda was breaking down our rabbits…hopefully this photo doesn’t scare you guys away! 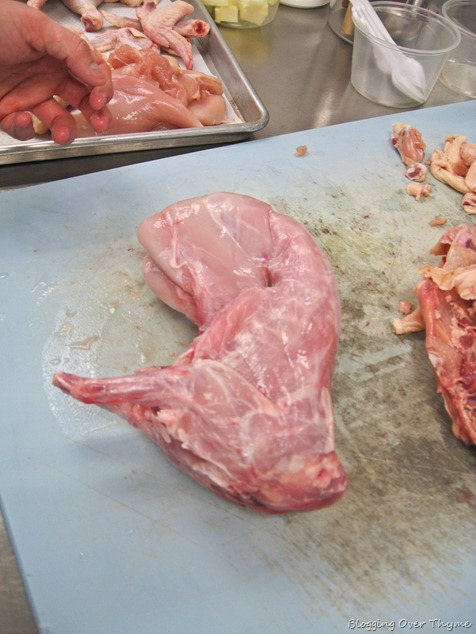 Our rabbit was good (because it was a farmed rabbit, it was very light in color and similar to chicken in texture, but tougher), but could have used a bit more time to tenderize in the oven. 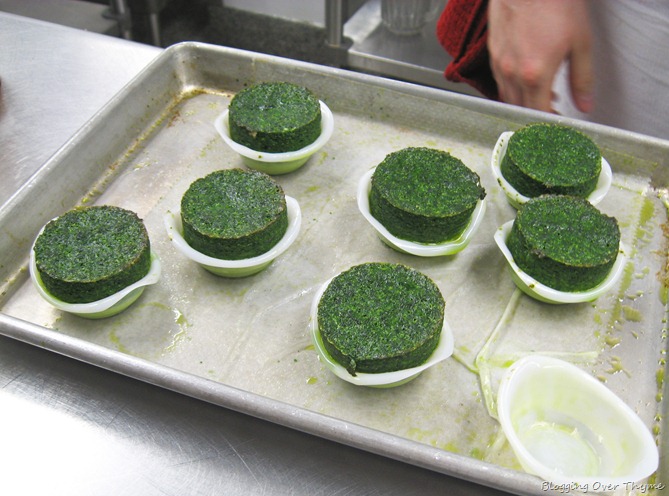 We served the rabbit with spinach flan—which was literally blanched spinach, which we squeezed of any remaining moisture, that was then processed in the blender.  Unfortunately, ours didn’t turn out very well because the blender was having lots of issues, so we just tried to fix it and see what happened.

This was then whisked into the custard base of cream and eggs, placed in ramekins, and baked in a water bath.  It actually turned out–I thought I was going to end up liking this, but the texture was very weird and jello-y.  I liked the concept though! 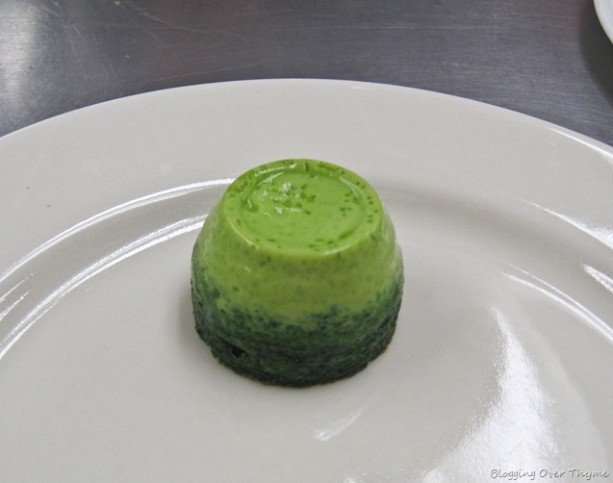 We start with chicken (mostly, because its cheap) to get the technique down—not really because chicken mousse is particularly delicious/or served in any restaurant—and then will eventually apply the technique to more delicious applications, such as scallop or lobster mousse.

One thing I really love about our instructors–Chef Brian, Chef Somchet, & assistant, Ashley—is that they are always mentioning other ways you could apply our day’s dishes or techniques.  For example, Ashley mentioned that at the restaurant she worked at, they made homemade cannelloni pasta stuffed with a scallop mousse that contained fresh lobster meat.  That sounds good. 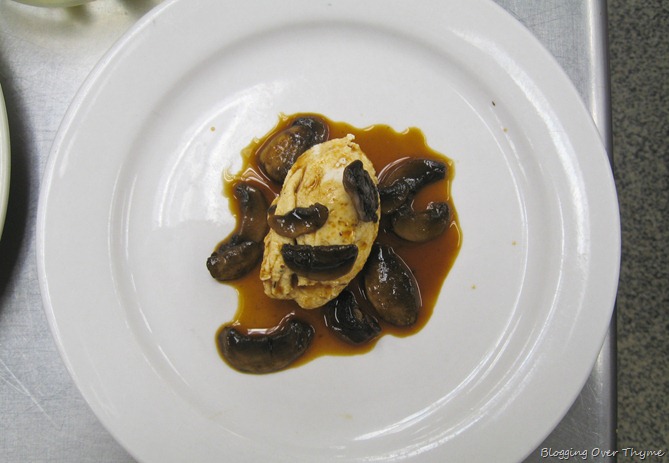 The actual technique of making chicken mousse is pretty straight-forward and simple.  In our case, we processed skinless chicken breasts in the food processor until it formed a thick paste.  This was then passed through a tamis, which is a huge mesh screen (to remove any fibrous bits) and then combined this just the right amount of cream.

It was kinda gross to work with.  Luckily, Tasha got that job! Ha! 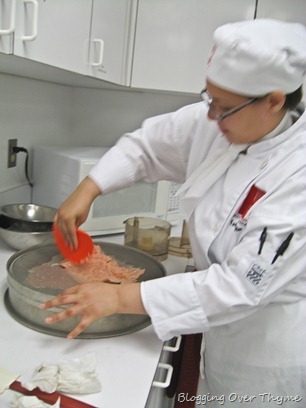 We then quenelled the mousse (made a football shape using spoons) and poached it.  It is as weird as it sounds, trust me!  It really does taste just like chicken, but the texture leaves much to be desired in my opinion.

With it, we served a mushroom Madeira sauce made with chicken bones, mirepoix, and the usual works.  This helped make it more tolerable, but I literally took a bite of this dish and that was enough for me. 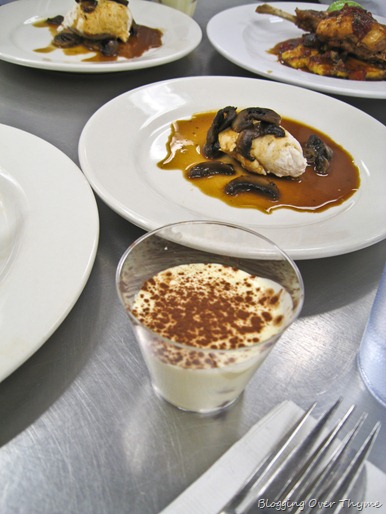 For dessert we made tiramisu, using our dried homemade lady fingers from the day before.  Though this was good, I’m not a big tiramisu person either. 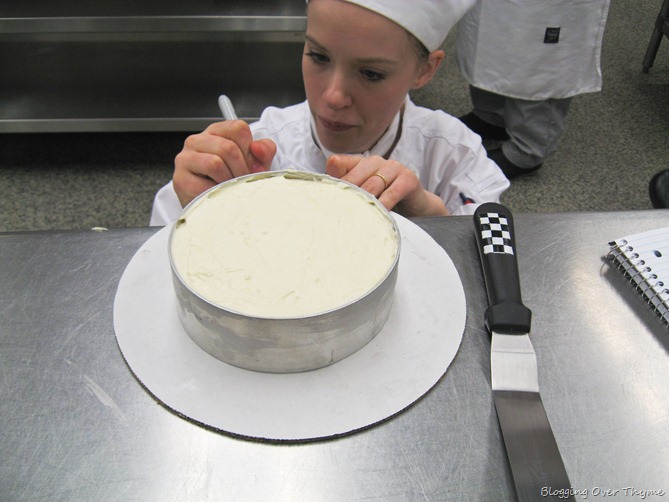 The afternoon was packed with more production, including starting the brining process for whole chickens, as well as making a white chocolate cheesecake for tomorrow’s class.

This post contains affiliate links, which means that I make a small commission off items you purchase at no additional cost to you. Please read my privacy policy for more information.
« Previous PostAyrshire Farm
Next Post » Day 37: Brining, Soft-Boiled Eggs, & Cheesecake