This week went by so quickly!  For some reason, I was exhausted and ended up taking an unintended nap almost every day after school.  But I’m back to share all the details with you.

Our first course on Wednesday was an interesting dish made with braised endive, wrapped in smoked ham, and covered with bechamel sauce.  This is very rustic, French café food and, as you can probably tell from the pictures, pretty rich.  We’ve made braised endive several times by now and I’m enjoying it a bit more each time, however, it is definitely an acquired taste, I would say.  Very bitter, but similar to the texture of buttery cooked leeks. 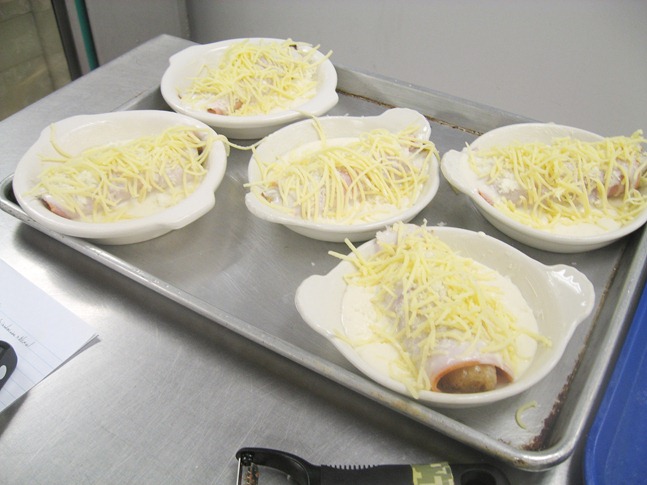 We topped ours with gruyere and parmesan cheese.  Look at all that melted, goeey cheese! 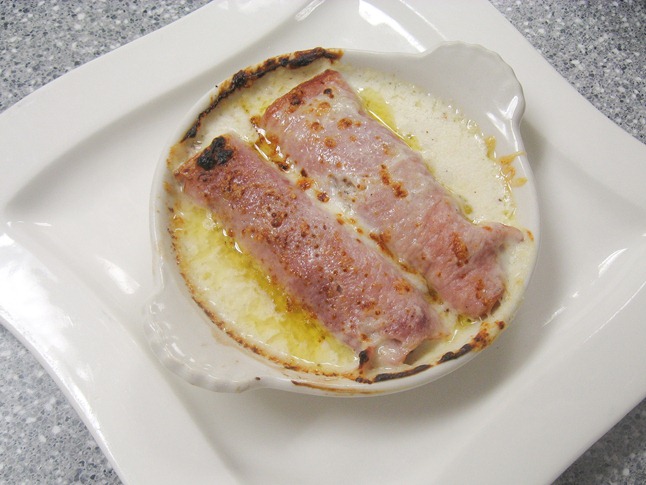 I was particularly excited about our main course, which was cod, cooked in a parchment parcel (known as a papillotte), along with sauteed vegetables, carrot, celery, & leek.  We served this on top of, believe it or not, roasted spaghetti squash!  I think this was probably the healthiest dish we have made in the past 2 months, let alone the entire time I’ve been in school.  Not a drop of butter in it at all!!

The key to making a papillotte is shaping parchment paper in a heart shape.  To seal it, you simply crease the edges, overlapping, and fold and tuck under the last piece, so that no steam or liquid escapes during the cooking process. 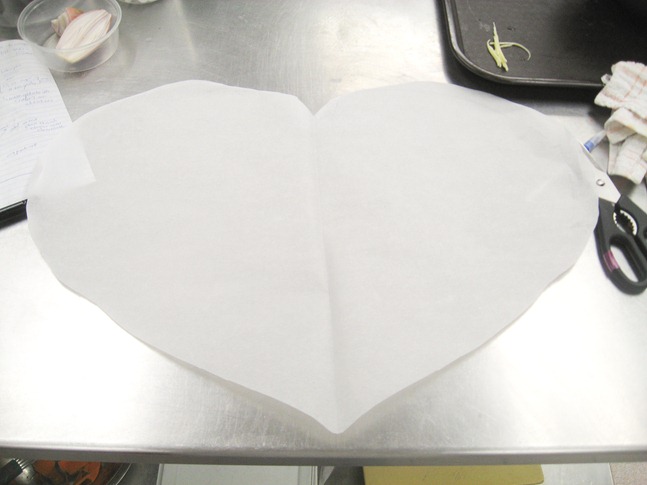 We par-cooked all the julienned vegetables prior to putting them in the parchment, as well as added in some fresh herbs, including thyme, tarragon, and chives, and poured in a very small amount of dry vermouth to help add some steaming liquid. 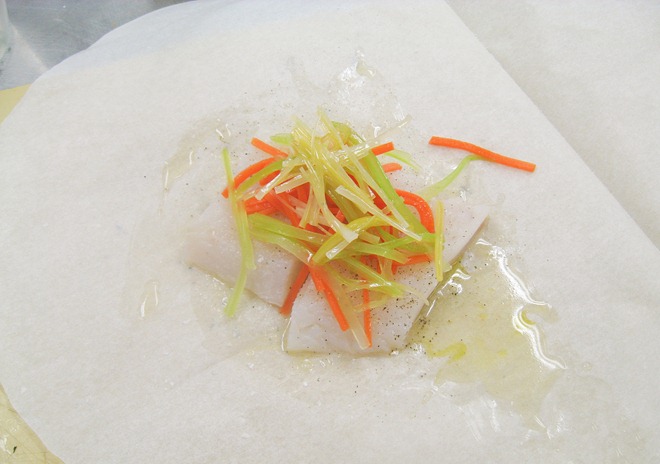 We then placed them in the oven at 350 degrees to steam!  Once we removed them from the oven, we actually opened them out, carefully removing the liquid, which we used to make a quick hot vinaigrette with some olive oil, dijon mustard, sherry vinegar, and lemon juice.  We also added some chopped chives for garnish. 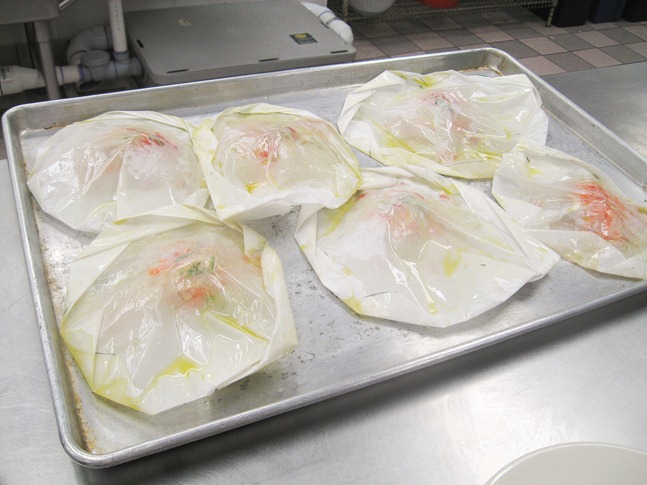 Here was the final dish!

It was very good—however, I must say, I’m not a fan of the texture or taste of cod—and I really enjoyed the roasted spaghetti squash underneath.  I’ve been meaning to buy spaghetti squash for years now to have at home, I still can’t believe this was my first time eating it. 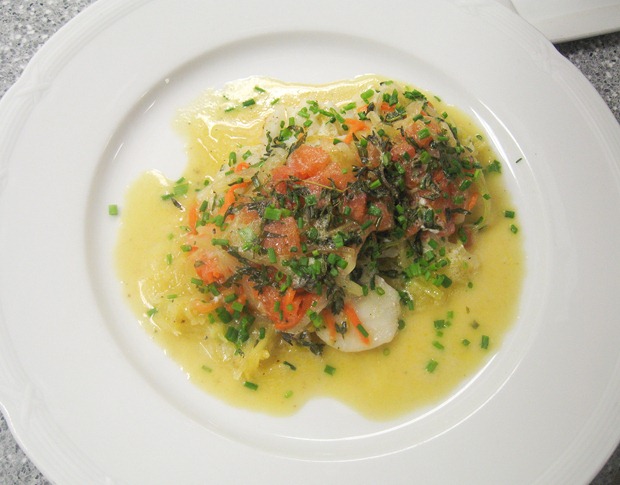 Our dessert of the day was a very special chocolate mousse (although that word doesn’t give it justice), which we served with a coffee ganache cream, as well as peanut butter crisp.  The trickiest part of the dessert was the peanut butter crisp, because it involved shaping them immediately once them came out of the oven.  They were very thin, fragile, and unfortunately, the humidity didn’t help one bit. 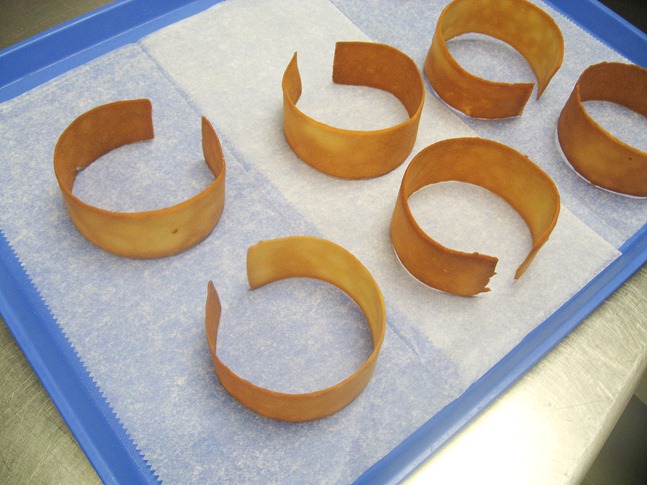 We served it also with a small amount of raspberry coulis on the side, which Chef Patrice added some edible gold dust to, for a special touch!  He loves breaking out the edible gold whenever he can. 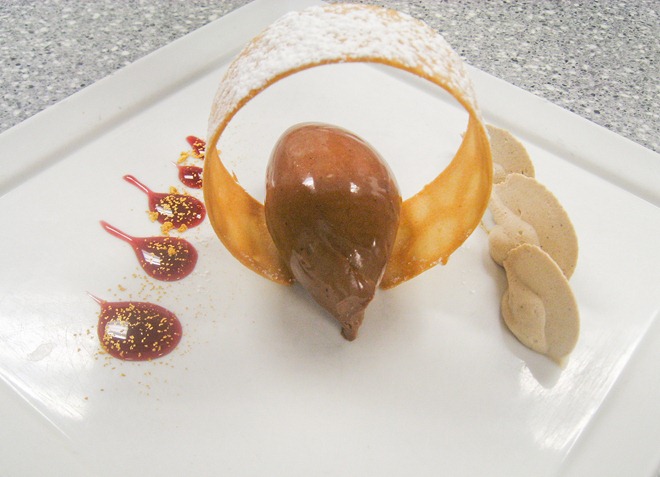 Overall, it was a fun day in the kitchen!

Back soon with a post on Thursday’s class (we served a four-course lunch that day!), as well as a brief recap on Friday’s Market Basket Challenge.