Our first day back this week was long!  But also very informative.  We started our first course with a salad (it’s been a while!) served with a brandade croquette.  Brandade is an emulsion made with salted cod and olive oil.  We also used some cream in ours as well.  It was my first time working with (and possibly eating…can’t remember) salted cod.  It has a very strong flavor, but I didn’t mind it!

Essentially our croquettes were a combination of cooked potato, salted cod (poached in milk and water), olive oil, cream, and garlic.  We combined all of this to almost the consistency of thick mashed potatoes, shaped it into quenelles, chilled them, and finally breaded and fried them to serve. 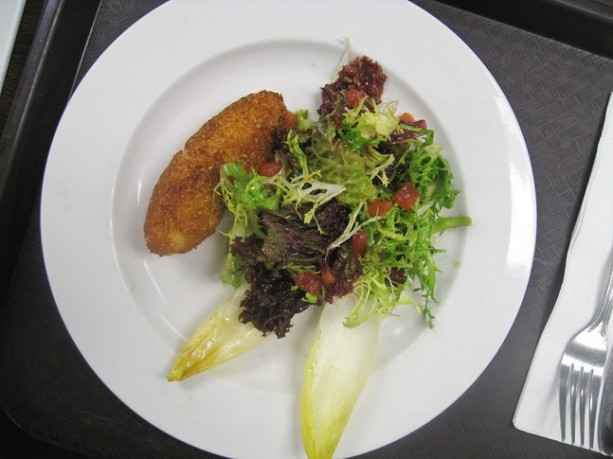 Our main course involved another new potato dish!  I am still amazed that there are still so many new potato dishes out there for us to learn, especially considering we have already made probably more than 25 different dishes with them.  I’m sure there are a bazillion more!  These potatoes, known as pommes roesti (at top of picture), were baked potatoes that were then peeled, grated, and combined with some gruyere cheese, butter, rendered bacon, and sweated onion.

This mixture got molded and then chilled, before finally being dusted lightly in flour and seared in a non-stick pan.  These were quite tasty and probably one of my more favorite potato dishes we have learned in a while. 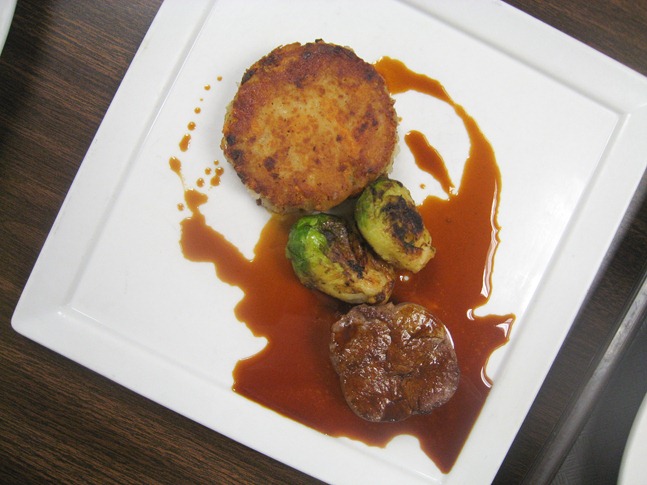 This was served with pan-roasted Brussels sprouts, lamb jus, and lamb tenderloin. I don’t know if I’ve ever had lamb tenderloin before, but it was really good.  Very tender and not too strong of a flavor, which I liked.  Lamb tenderloins are obviously very small, so we used four pieces and pressed them together, wrapped them tightly in plastic wrap to mold into a large log.  We then sliced the log and seared the pieces with the plastic wrap on—which helps keep its shape.  Don’t worry—the plastic wrap at school can withstand the heat and doesn’t melt.

And finally, our dessert was another new  tart called Tarte Florentin (without an “e”).  Although I can’t remember why it is called this! 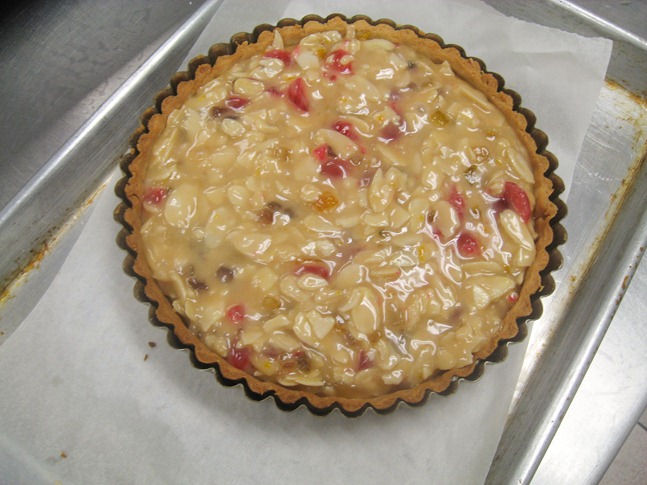 It was a very sweet dessert, but better than I expected it to be!  To describe this, I would say it is similar to a caramel tart, but with the addition of sliced almonds and candied fruit.  The crust got blind-baked, we then filled in with a caramel (soft-ball) made with cream, sugar, and honey.  To this, we added flour, sliced almonds, and the candied fruit. 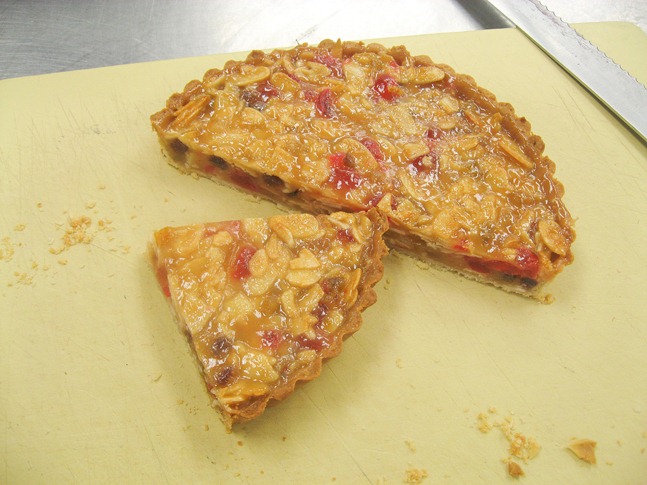 This then got baked for barely any time at all, before we set it in the fridge.  Unlike our fellow pastry students, we don’t use candy thermometers, but instead dip our hands in ice water and then grab a bit caramel to test it with our fingers.  And yes, it sounded insanely crazy to me the first time I was told to do that too.  Voluntarily put your fingers into boiling sugar, umm…no thanks.  Luckily, it has worked out, but it still makes me nervous each time!  I’m a bigger fan of thermometers, even if this other method is really accurate as well. 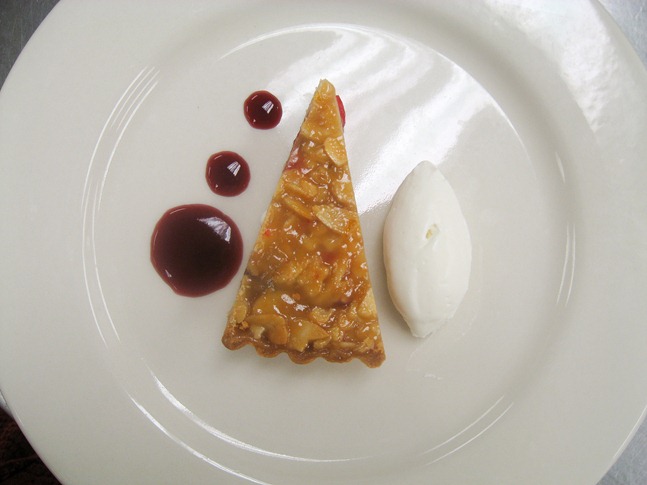 After lunch, we had to eat really quickly, before heading into the classroom to start making terrine—which is a sophisticated pate—and also have a demonstration on how to make croissants au beurre (classic  butter croissants), pain au chocolat, & filled croissants.  We are baking some off tomorrow morning for breakfast!

I have to say, I have been wanting to known how to make homemade croissants for years!  They are probably my favorite pastry ever (the good ones…), so I was really excited to learn how to do this finally.  I can’t say I will be whipping up homemade croissant every day now, but I definitely want to try to make these for a special occasion at some point soon.  I think the hardest part of shaping them nicely, which I thought would be the easiest part going into it.   Well worth the effort, though! 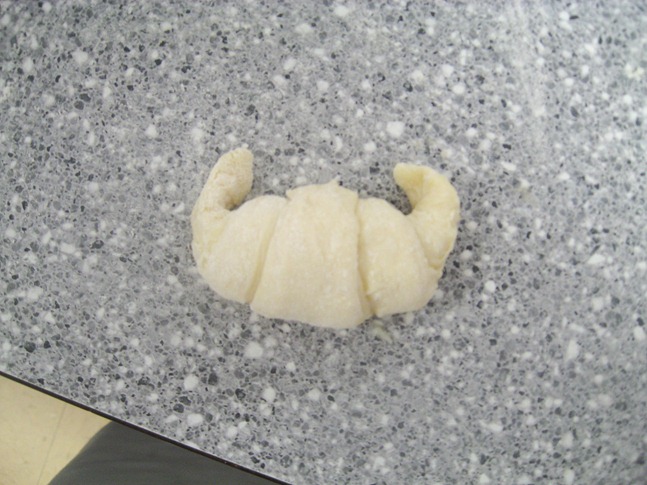 And now, I am officially off to head!  Hoping my headache (probably from dehydration, which is something I really need to work on getting better at before starting my externship) is gone by the morning.