Whew, today was exhausting and chock full of new techniques and tons of information!  I will save that recap for tomorrow though, because I still have to tell you all about Wednesday’s, Day Eight, class.

It was our first official day of cooking protein!  So far, we’ve trimmed hundreds of pounds of chicken, broken down chickens, but never actually cooked any until now.  Though I don’t eat a ton of meat at home, learning about butchery and meat cookery has been one of the things I’ve most looked forward to learning about in culinary school—mostly because I have so much to learn!

Yesterday was also my favorite meal to date in the program.  Very yummy!

The main course of the day’s menu was LE POULET ROTI AU JUS (Roasted Chicken with Jus).  However, we did not roast the chicken in the traditional way.  It involved a lot more technique, but the end result was so worth it—because you end up with a very juicy chicken full of flavor (it tastes better than it looks!). 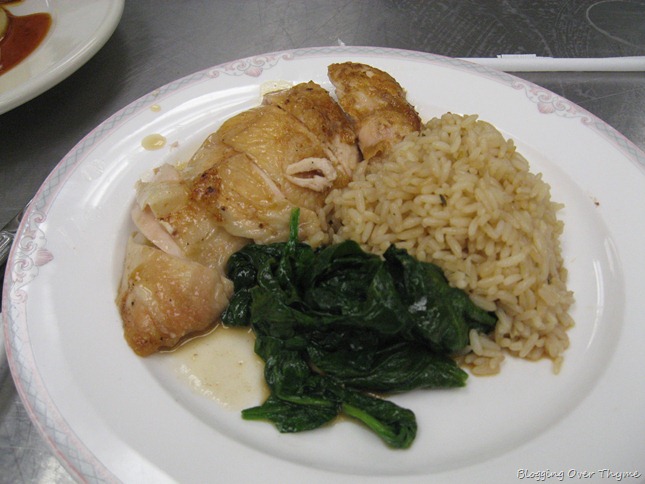 For this dish, we completely the following steps:

Then…we did the most interesting part!  We took the whole bird (stuffing and all) and seared it in a hot skillet with clarified butter.  We used our fancy kitchen forks to pierce the bird so that we could easily maneuver it and hold it in one hand.  However, the searing was specifically concentrated on the legs and things.  This helps render out some of the chicken fat (which in general is not a tasty thing, we try to remove as much as possible!), add color, and help guarantee that all different parts of the bird will be equally moist when it is done roasting.

After searing the chicken, we added more mirepoix to the skillet and placed it directly in the oven to cook, roughly at 375 degrees, until we picked up the chicken with our forks and saw that the juice ran clear (if its pink, it means that it is still slightly undercooked).  Actually, in our case, we removed the chicken while it was slightly pink, so that we could carve it and then reheat for service (without over cooking and drying it out).  While the chicken was in the oven, we also basted it with the pan juice every 15-20 minutes to keep it extra moist.

Once we took out the bird, we did the following:

As an accompaniment to our chicken, we also made rice pilaf, which turned out deliciously.  I’ll talk about our technique for doing this soon!  We don’t use traditional lids and we finish cooking it in the oven—sounds interesting, huh? 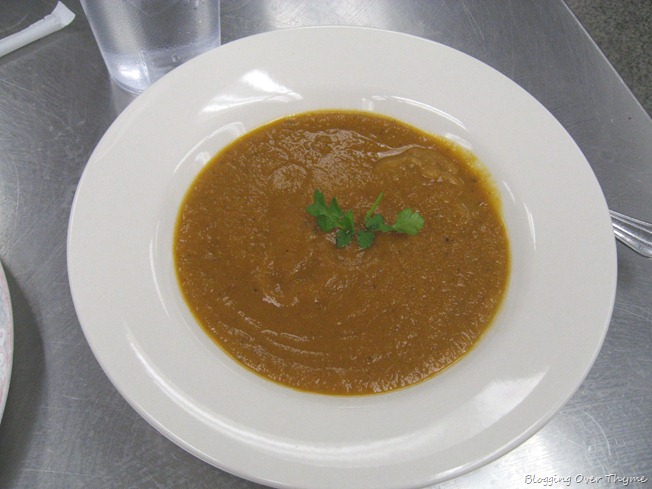 In addition to our delicious roasted chicken, we also made LA SOUPE D’AUBERGINE ROTIE, or Roasted Eggplant Soup.  I loved this dish too!  Seriously, give me a good soup and a really yummy roasted chicken and I’ll be happy any day of the week.

I WILL be making this soup in the near future, if not this coming weekend!  Perhaps a recipe post will be shared with you all.  It was a fairly simple recipe as well.

It involved taking a full eggplant, halving it, and rubbing it with olive oil and toasted and ground cumin seed.  We roasted this until it was soft, scooped out the inside and reserved it for the soup.   Meanwhile, we cooked some celery and onion, added stock, followed by canned diced tomatoes, the eggplant ‘innards’, and lots of additional seasonings, including cayenne pepper and cilantro.  Once it all simmered away, we stuck it all in the blender!

I don’t think this soup is always made in Phase I, so I’m happy we got a chance to make it! 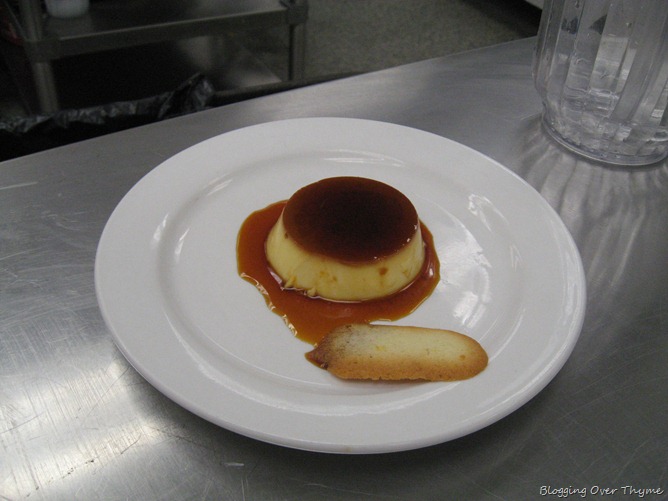 If that wasn’t enough, we also made crème caramel, a classic French custard dessert and LES PETITS FOURS SEC (which means ‘little fire’ and is a nice, crispy dry cookie—that in this case, was piped in the shape of Langue de Chat, which means “cats tongue”).

Crème Caramel is such a delicious and simple dessert—and one of my favorites!  All you do is make a simple custard, infused with orange and lemon zest, and vanilla bean.  The delicious bitter, caramel sauce is made by making caramel (water, sugar, and corn syrup), putting a small amount on the bottom of a ramekin, and topping it with the custard, and baking in a water bath at very low heat oven (275-300 degrees, but never hotter! This keeps the egg proteins tender).   You then invert the custard on a plate and all the delicious caramel spreads all over the plate.

Since the caramel is cooked to be very dark (cooking out most of the sugar, which brings out a delicious bitter quality to the sugar), it perfectly balances the sweetness of the sugary custard.  Yum! 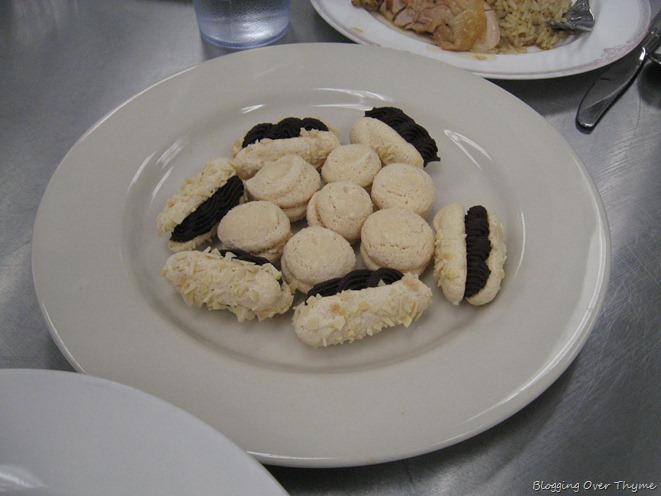 If we didn’t already have enough to tempt us at lunch, pastry students also brought us these beautiful treats (my brain is currently blanking on the name…I need sleep!).

All in all, it was a delicious, successful lunch that I was really happy to make, learn about, and EAT!  My partner, Turner, and I were the first to get our plates done on time, for the most part, so that was a nice end to the day as well.

The afternoon lecture was all about food costing, which I find really, really interesting, not to mention useful!  A lot of it is simple math, but essentially all about figuring out how to find the true cost of a dish (literally how much it costs in terms of ingredients) and eventually being able to come up with a menu/sale price!  But in general, restaurants try to keep their true food costs below 30%.  I’ll talk about this more as time goes by…

Tomorrow night, I fully plan on making the roasted chicken at home for Connor, not only for practice, but as a testament to how great it was.  Here’s hoping it turns out just as well, if not better!  Now I just need to buy some kitchen twine…

This post contains affiliate links, which means that I make a small commission off items you purchase at no additional cost to you. Please read my privacy policy for more information.
« Previous PostDay 8: Hollandaise & Eggs Benedict
Next Post » Day Ten: Filleting Fish, Tourneeing & Crème Brulee