Yesterday was another jam-packed day in the kitchen!  I walked into class in the morning to see a whiteboard filled from top-to-bottom with dishes that we would be making that day.  It’s always exciting, but a little intimidating at the same time. 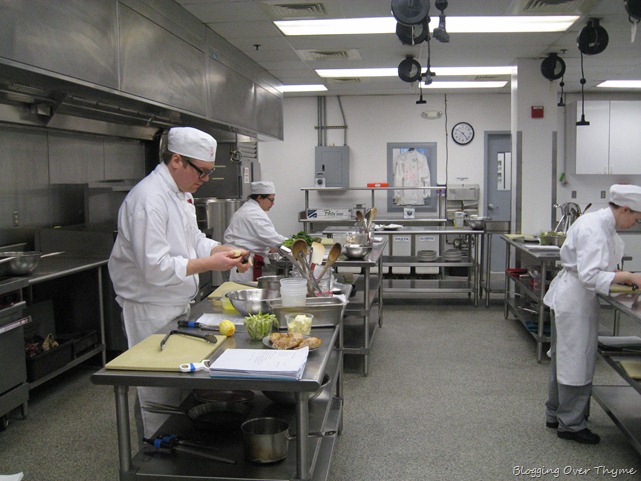 Official Menu of the Day:

The menu involved learning a ton of new techniques:  tourneeing (which is an extremely difficult knife skill used for vegetables) filleting whole flat fish, and using the hand-held torchers to make the crème brulees.  That’s a lot of stuff to pick up on in one day!

During our demo in the morning, our chef demonstrated the technique used to fillet a flat fish—which in our case, was a very large flounder.  But the same technique is used for all flat fish!   The largest flat fish species is halibut. 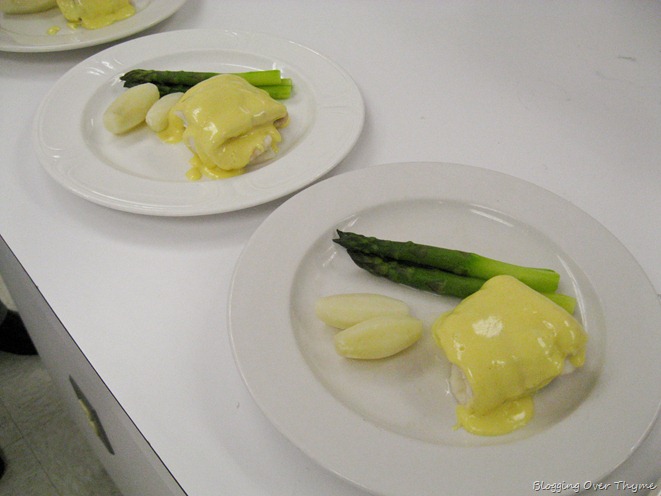 The Chef’s Demo Plates – trust me, my tourneed potatoes did not look that good!

One interesting tidbit of information that we’ve learned is that you should store fish the way it swims.  Therefore flat fish on their bellies and round fish upright on ice.  If you’re buying fish whole, you should look for these characteristics, which ensure that its very fresh:

Basically, we use our flexible boning knife to cut along the spine, around the head and belly, and at the tail.  Then you use your knife to carefully remove the filets on both sides.  It is a hard technique to describe with words—maybe when I practice and become competent I can video the process!

Once we filleted the fish, we were to poach it in equal parts whole milk and water—that had been seasoned with bay leaf, thyme, and peppercorns.  This was topped with a NAPE (just to cover the surface) of Hollandaise.  That’s right, hollandaise was made again.  And I am happy to report that mine turned out better than the first day (in terms of seasoning) and did not break yet again.  Apparently hollandaise is my new friend…

With this, we served plain asparagus (trimmed, cooked in very salty boiling water, shocked in ice bath, and reheated before serving) and TOURNEED potatoes—as shown in the photo above.  Tourneeing is going to be the death of me, I swear!  Basically, its an incredibly detailed knife skill that requires turning a vegetable into an equal, seven-sided football with flat ends.  It is so difficult!  And I know that it will be on our practical exam next week… 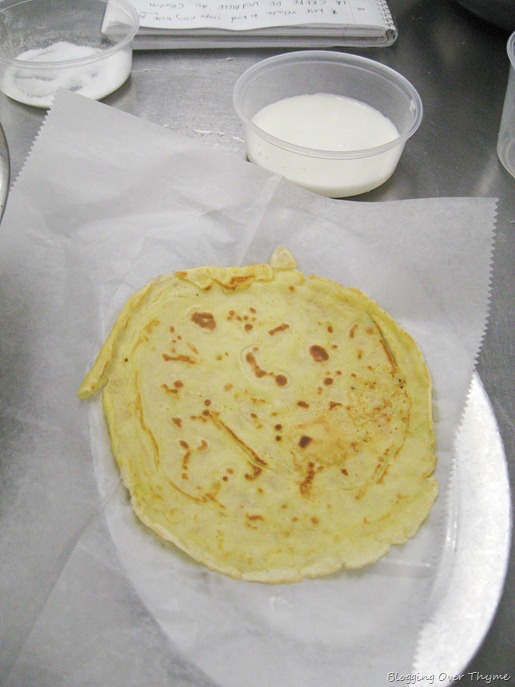 In addition to our entire fish dish (which was very time-consuming), we also made LA CREPE DE VOLAILLE AU GRATIN, which basically means stuffed chicken crepes.  Of course, this meant we also had to make crepe batter and make crepes, which was fun and all of mine turned out well!

We used our leftover roasted chicken leg meat and combined it with sauteed mushrooms and spinach and mixed it with veloute sauce (another classic mother sauce—which is essentially roux and stock thickened—and we added in gruyere and parmesan cheese) to bind, stuffed it in the crepes, and then put on more veloute sauce, sprinkle of cheese, and this all went in the oven to brown! 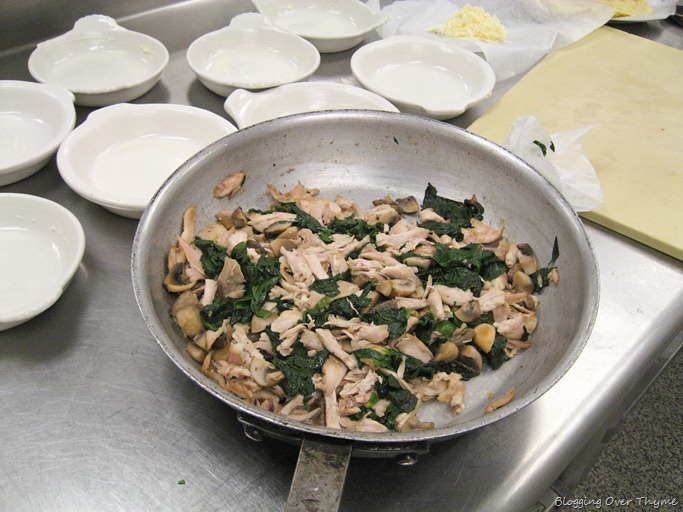 It was actually pretty tasty, although we had to rush to serve it in the end, so it didn’t get quite as brown as it should have. 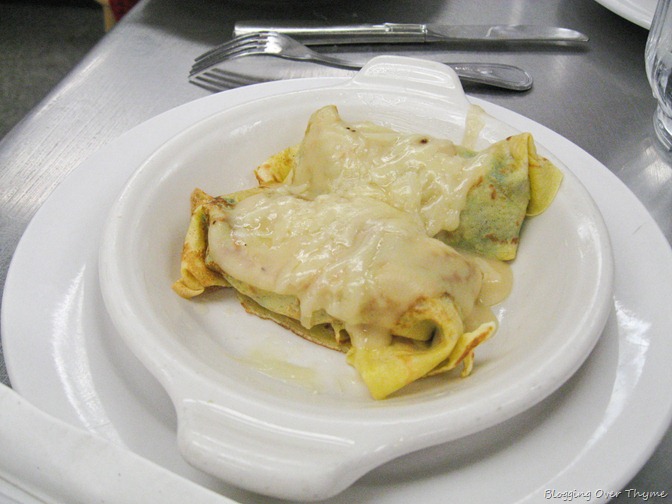 And, of course, let’s not forget dessert—which is becoming a common part of our menu around here!  Actually, our school is based on a menu-format curriculum, so we will always have a dessert on the daily menu, and they will only get more difficult as we go.

Today’s was CRÈME BRULEE, a cousin of crème caramel.  Besides having your own torch to burn the sugar, crème brulee is a cinch to put together.  You make a quick custard, which we flavored with vanilla bean and orange peel.  It was baked in a water bath (low temperature, as all custards do), cooled in fridge, and before serving topped with granulated sugar and then torched to burn and create the classic, shell on top. 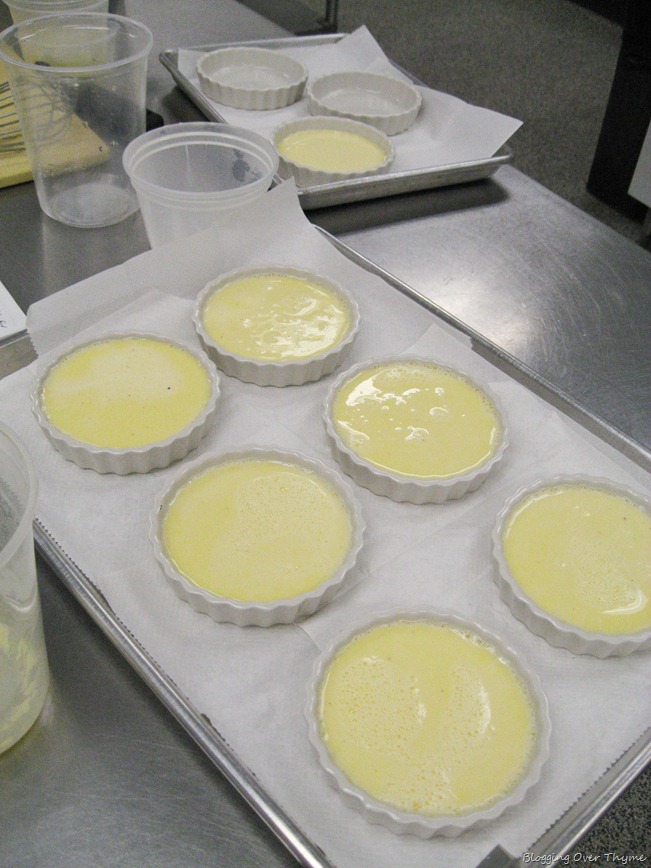 One really interesting fact we learned while making all these custards this week was that there is a specific reason behind using the ridged shallow crème caramel ramekins.  The ridges allow more surface area for the heat of the oven to penetrate and the shallowness ensures that you will have the perfect ratio of burnt sugar caramel to sweet custard.  Not just for decoration…

This was good…too good.  I tend to avoid crème caramels at restaurants, because its so cliché and not very unique now, but a homemade crème brulee is hard to resist no matter what. 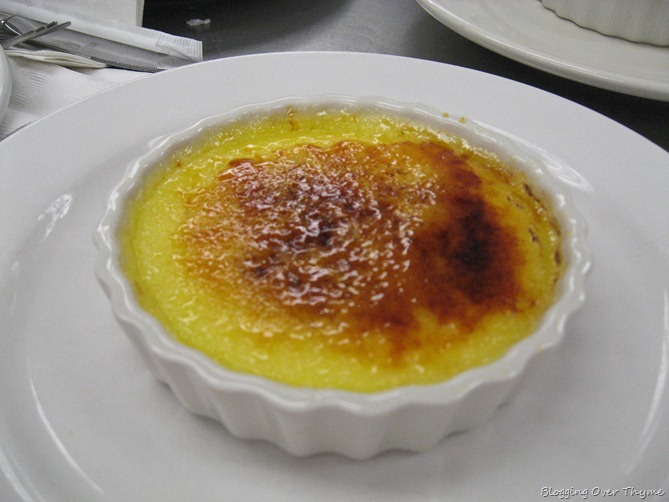 Our time in the kitchen quickly went from calm and feeling like we had everything under control, to running around at the last second and barely getting everything to the table (this seems to be a common theme).

It really is the little details that end up taking you the most time, like clarifying butter everyday, peeling vegetables (in this case, close to 30 asparagus), and obviously, tourneeing, which was an adventure in and of itself.

Because we were out two students yesterday, I was teamed up with two people, which should have been a blessing (more hands), but really, at this point, we are expected to do everything.  Usually each table is responsible for plating roughly 4-5 of each dish (usually 2 per student); to feed the fellow pastry students, front of the house, and themselves.  Unfortunately, our table had to make up for lost students and was responsible for plating NINE of everything.

Though it doesn’t sound like a lot more, it ends up eating into your time, because it requires even more filleting of fish, tourneed potatoes, and lots of other details. 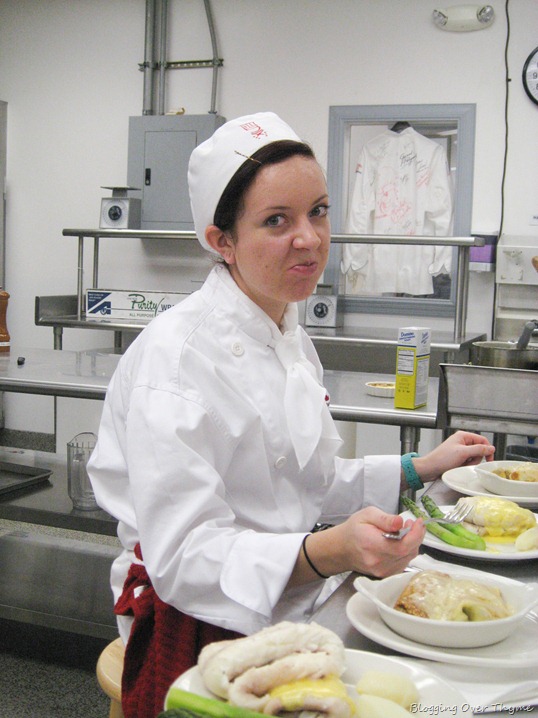 One of my partner’s for today, Hannah, who does not like fish!

We were all behind once again and by the time we all sat down to eat, I barely had an appetite.  It is hard to rush around quickly and then transition to sitting down and trying to relax and enjoy your food.  Especially when you have even less time to eat it…

All I really wanted to do was chug glasses and glasses of ice water!  Even though we were behind, I’m still pretty amazed that we are able to accomplish this much (which apparently is nothing in comparison to what’s ahead!) at the end of the day.  Lordy.

Meanwhile, as we’re running around like chickens with our heads cut off, the pastry students stood there patiently while they waited for all of our food and offered gifts of homemade raspberry, vanilla, orange, and lemon macaroons. 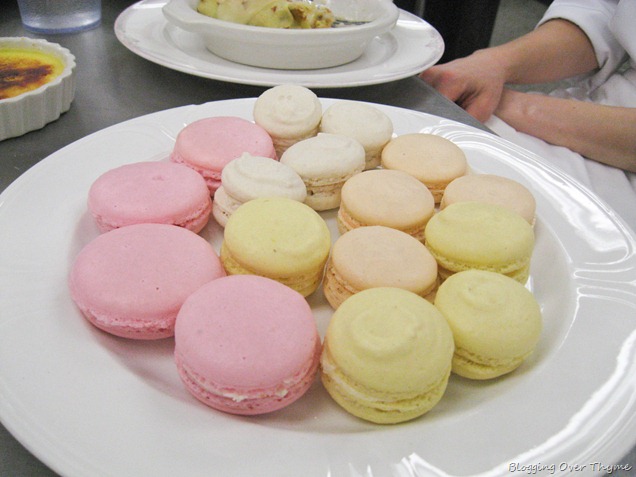 The pastry students always seem so much more relaxed and put together—it’s pretty amusing.  Curious, last week, I asked one of them what the pace of their day was usually like and she gave me this little analogy, which I wanted to share with you all, because it was very enlightening:

“You know that episode of Grey’s Anatomy, where they all go from surgery to dermatology and they are all sitting around not knowing what to do with all their newly freed up time???

Well…we’re dermatology, you are surgery”

And with that, I’m off to make roast chicken for dinner!  Hopefully it will be just as delicious as it was the other day.

This post contains affiliate links, which means that I make a small commission off items you purchase at no additional cost to you. Please read my privacy policy for more information.
« Previous PostDay Nine: Roasted Chicken, Eggplant Soup, & Crème Caramel
Next Post » Roasted Eggplant Soup