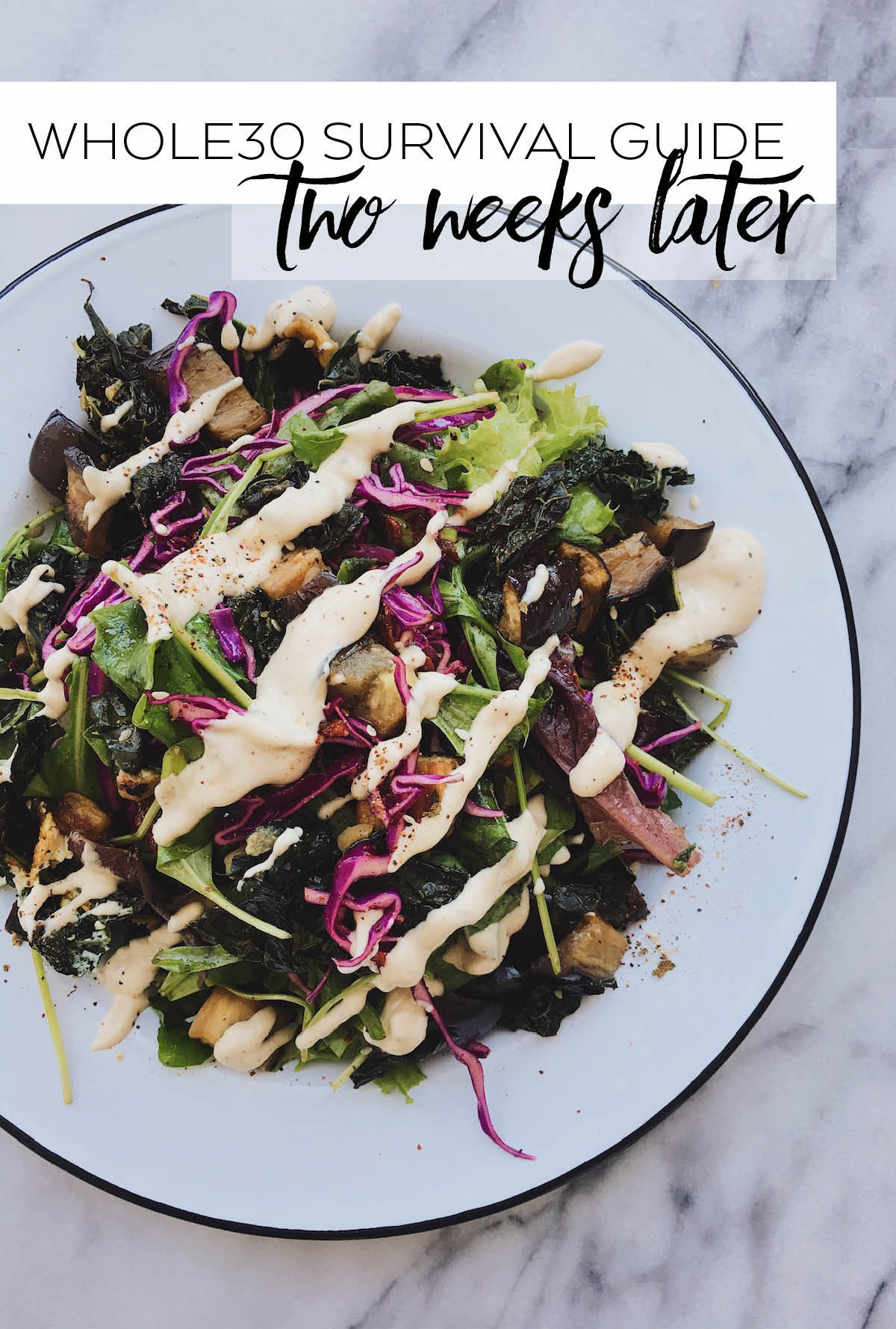 Woh! I’ve officially crossed the halfway threshold of this Whole30 challenge. In fact, today marks day twenty one. Twenty one days with zero added sugar, grains, legumes, corn, and soy. But let’s back up a bit.

When I first shared the first part of my Whole30 survival guide, I was only four days into this whole thing. Four days! I was about to embark on a quick weekend getaway to visit my sister and brother-in-law in New York City. As promised, I thought I would check in and let you know how it is going, how I’m feeling, and my thoughts in general.

For the first two weeks of the program, I was fairly diligent with keeping a daily journal. Over the last week or so, that sort of fell by the wayside. Oops. Here’s a quick snapshot of how I was feeling/my experiences during the first two weeks:

To be honest? I’m not feeling that different. I never experienced a surge of energy after the fourteen day mark, as some people experience. My energy levels do seem to be more steady throughout the day, perhaps a bit higher, and I am sleeping very well (luckily, I sleep fairly well in general). I’ve also found that I can wake up more easily. Again, nothing drastic though.

The most noticeable difference is that I feel a bit more satiated throughout the day. I’m also hungrier in the morning. I’m not a massive snacker, but I really haven’t felt the need to snack either. I think it is because I’m eating more protein and vegetables at breakfast and lunch.

Week one was easy for me. I feel like it’s fairly easy to keep up any routine whenever you first start it (think honeymoon phase).

Days 10-14 were fairly brutal. I almost quit during this period. No joke. For whatever reason, I felt extremely bored and mentally (not physically) unsatisfied during this period. I was annoyed and questioned why I was doing it. Quite simply, I was over it.

I wasn’t even having any serious cravings, I just really wanted the flavor and variety of certain foods. I missed milk in my coffee. I was sick of eggs. I was cooking different things, I just didn’t feel like eating any of them. Introducing some new meals into the repertoire over the following week and realizing I was more than halfway through really helped. I haven’t felt that way since, thank god.

As I predicted, I’ve had to become more creative with my meals throughout the day. I’m incorporating more vegetables and healthy fats (lots of avocado, etc.) into my breakfasts and lunches, and generally haven’t been snacking. I’m also making an effort to have leftovers at all times. Leftovers are a lifesaver, especially when you can’t stand the idea of cooking one night!

Since it is easy to get bored, I’ve been cooking more seafood each week (these mussels are definitely going to become part of our regular routine).

For whatever reason, I didn’t make a lot of soups in the first two weeks – and these have been lifesavers for me! There are a ton of naturally compliant soups that you can make and I find them really satisfying as meals.

Let’s be honest. Eggs become boring really quickly when you’re doing this. I had a bit too many eggs in those first two weeks and never wanted to see another one by day ten. I have incorporated a bit more variety into my breakfasts ever since, and my egg aversion seems to have disappated as a result.

I have turned to smoothies on occasion for breakfast. I make them fairly light on fruit (using berries, maybe half a banana) and have been adding collagen protein powder, almond butter, avocado chunks, and vegetables (spinach, frozen cauliflower, etc.) to make them super satiating!

I also added chia puddings into the mix fairly recently, which has been a nice change too. On lazy occasions, I have eaten leftover soup for breakfast. It is a bit weird to eat chili for breakfast, but you don’t even care once you’re halfway through this thing. 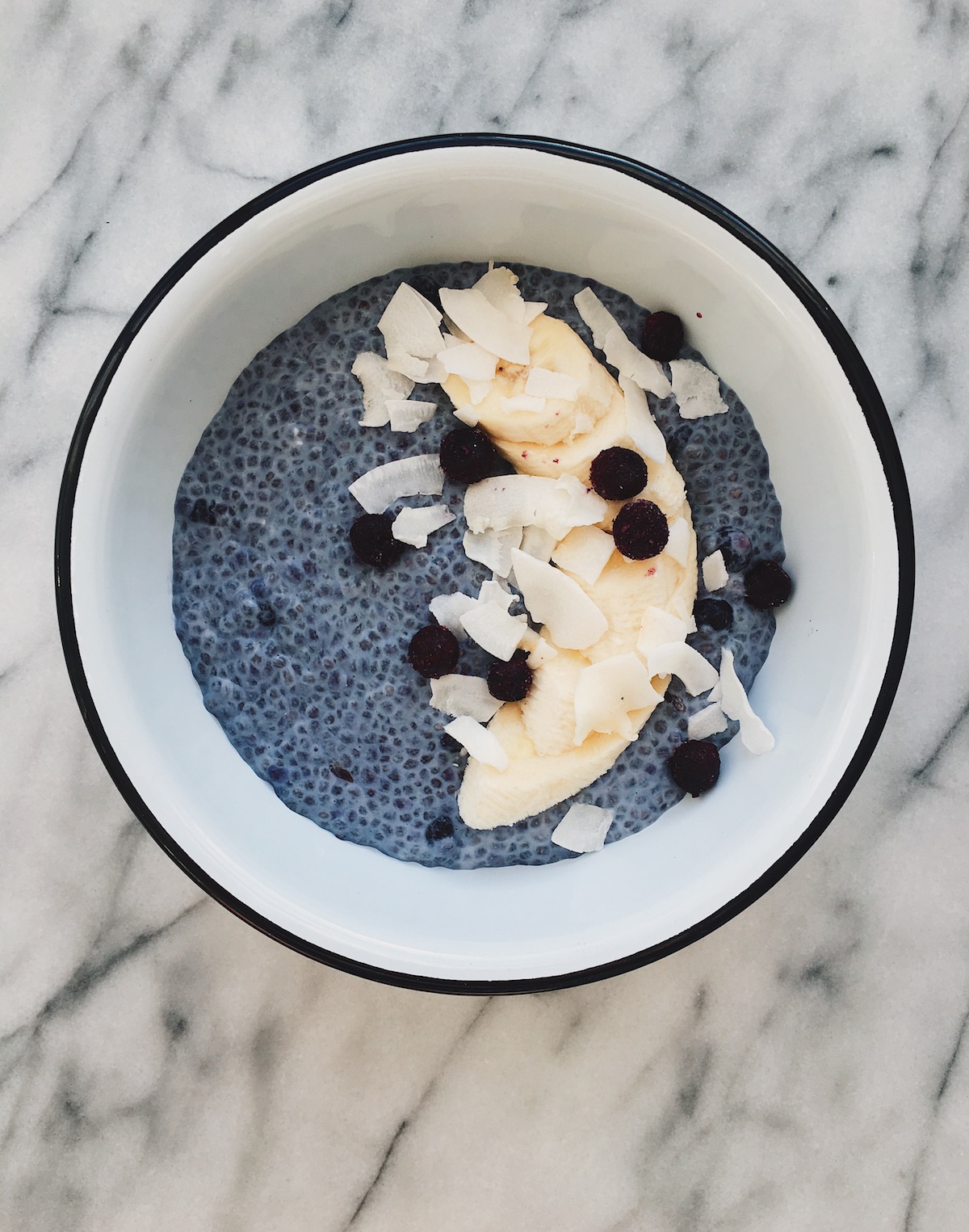 Easiest Thing to Give Up:

Added sugar. I think giving up added sugar (in all forms) is usually the hardest part of Whole30 for most people – and produces the most side effects in that first week – so I feel thankful that I haven’t found this part difficult. I credit this to not having eaten that many foods with added sugar before I started. I haven’t experienced any headaches or sugar withdrawal symptoms.

Would I happily eat a doughnut? Sure. But I haven’t had any crazy cravings for baked goods.

Also, alcohol! I’m not a big drinker by any means (I mostly drink wine and beer, and try to limit it on the weekdays anyway), but I’ve been missing it less than I expected. If I’m craving a beverage, I’ve been turning to La Croix waters or my favorite kombuchas.

Hardest Thing to Give Up:

For me, the hardest thing has been dairy. My morning coffees are not as satisfying. Granted, I have been spoiled with daily cappuccinos ever since we got one of these machines. Despite literally trying every alternative milk on the market, not a day has gone by where I have not missed milk in my coffee in the morning. On the other hand, I have gotten used to it.

Life without cheese is also sad. Totally doable, but sad. As an Italian and pasta lover, I can live with substituting regular pasta with zucchini noodles on occasion. Not being able to put a sprinkling of parmesan on top to make it more satisfying? Sort of depressing <— truth.

In general, I’ve found that its much harder to feel mentally satisfied when recreating certain favorite meals that can’t compare to the real thing. Especially if you’re used to the real thing. For example: I prepared cauliflower fried ‘rice’ in week one. It was good, but I honestly would have preferred to just roast the cauliflower as a side and create a meal that didn’t revolve around rice at all. Fake or real. That’s just my own experience.

This hasn’t been a massive craving (and I haven’t had any wild food dreams, as some people experience in the first few weeks), but I can’t wait to bake homemade bread. ?

I’ll be sharing it later this week! I actually made it multiple times last week, because I’m that obsessed with it right now. Compliant or not, I would happily eat this any day. Look out for it soon!

This post contains affiliate links, which means that I make a small commission off items you purchase at no additional cost to you. Please read my privacy policy for more information.
« Previous PostThe Weekly Mix
Next Post » Easy Lemon Tahini Sauce