I’m back with a recap of our great menu from yesterday!  The day involved some really great dishes, which I am really looking forward to recreating again soon.  Now all I need is a sautoir pan at home… They really are one of those essential kitchen items that we use nearly every day and are essential for making pan sauces, etc. 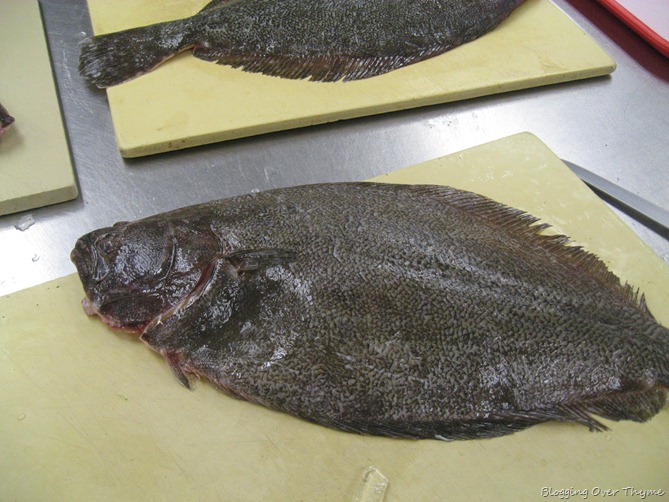 Flat fish, specifically flounder, made an appearance for the second time.  However, I much preferred this dish in comparison to our first fish experience, which was poached and topped with Hollandaise sauce.

Today’s menu gave us the opportunity to practice filleting and skinning once again, which definitely was much easier the second time around.  I am so excited to make a trip to the DC Fish Market downtown sometime and actually be able to do this at home! 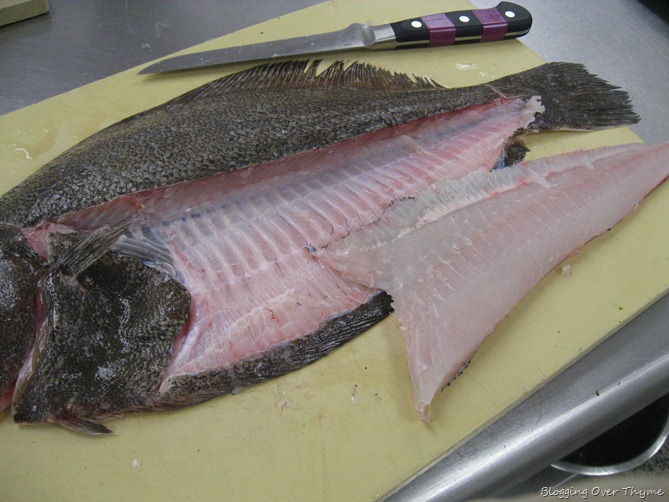 Our dish, LE FILET DE LIMANDE MEUNIERE, involves coating fish filets in flour to remove excess moisture, searing them over high heat on both sides, and serving it with a spoonful of demi-glace (reduced veal stock) on top, followed by a quick pan sauce—using the same pan we cooked the fish in.

The pan sauce is made with butter, which is browned, tons of extremely finely chopped parsley, and finished with lemon juice.  If you have ever seen Julie & Julia, it is the dish she raves about in the French Café!  Simple, but full of flavor and very delicious especially with that kick of lemon juice. 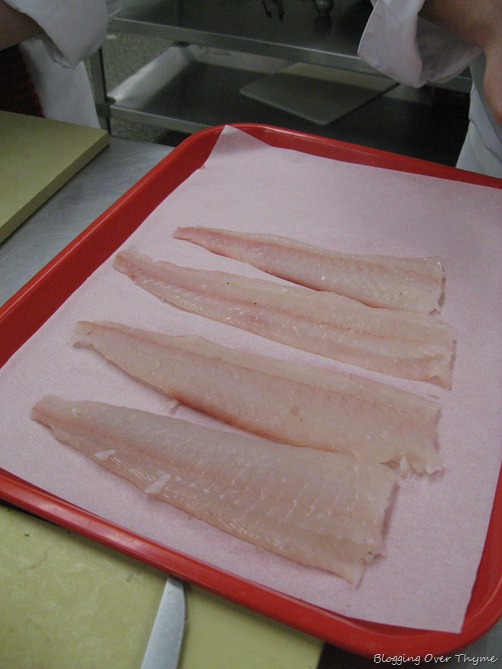 The veal stock was made the previous day in class and adds a nice richness to the dish.  However, I am sure that you could negate this step at home, since I don’t think I’ll be making homemade veal stock any day soon.  My chef did say (when I asked) that you could follow the same stock method with chicken bones, if necessary.

It was also nice having a daily menu that wasn’t as butter-laden as the previous day’s. My stomach was significantly happier at the end of the day! 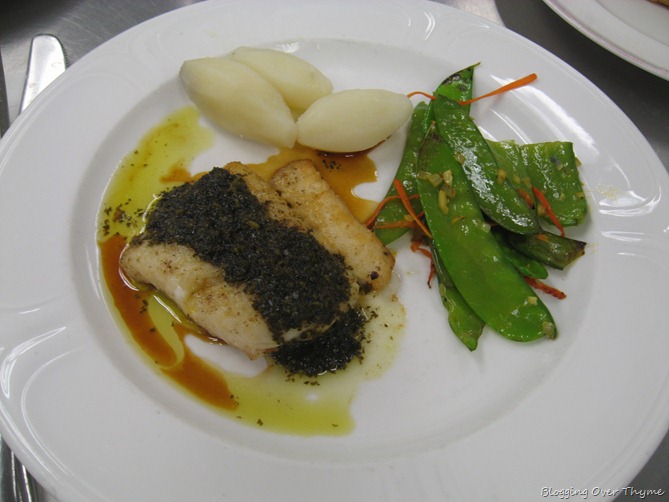 We served our fish with POMMES VAPEUR—which are tourneed potatoes (notice a common theme here?) that are cooked over steam.  After tourneeing our potatoes, we placed them in a strainer in a saucepot with simmering water.  We covered the potatoes with a cartouche (parchment paper lid) and allowed them to cook from the steam.  Apparently, it gives them a certain texture different than merely boiling, but I’m not sure if I really noticed (woops!).  We won’t make these specific potatoes very often though!

We also made LES POIS MANGE-TOUT, which are basically stir fried (sauteed) snow peas with very, very finely julienned carrots and a touch of garlic and shallot.  These were really nice and simple, minus the de-ribbing of the snow peas, which was a pain in the butt. 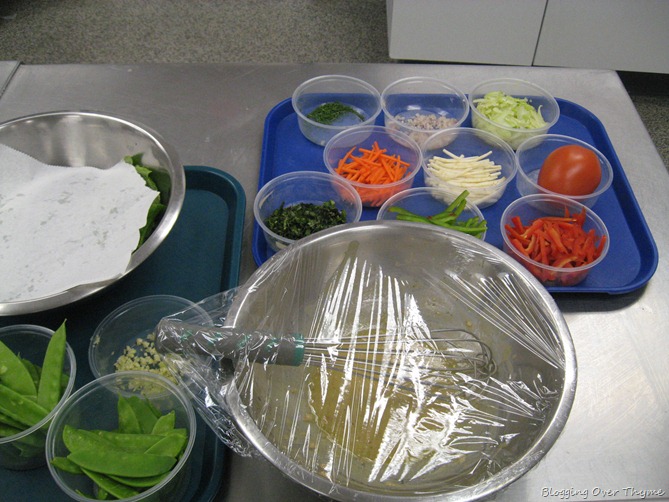 Our mise en place for our composed salad!

To go with our fish, we also served a composed salad, which was really delicious and full of colorful vegetables.  The base of the salad was boston lettuce with shaved fennel, on which we placed finely julienned red and green bell peppers, celery root, sliced tomato, carrot, and celery.  We also put very small raw cauliflower florets on top!

Everything was dressed with a classic vinaigrette made from sherry vinegar, dijon mustard, olive/canola oil, and a little bit of minced shallot. 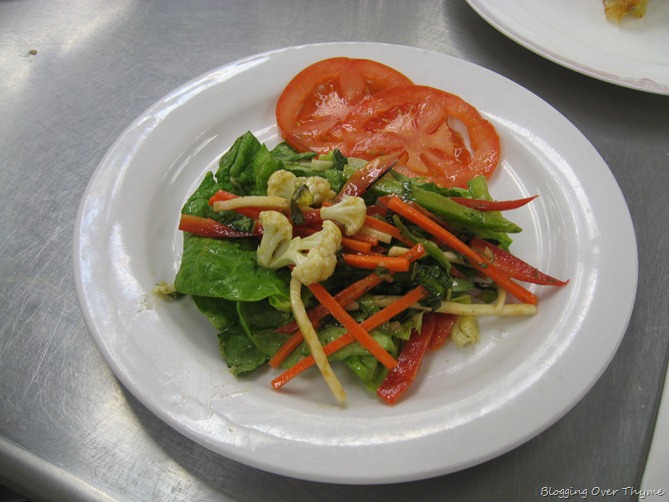 And, last but not least, for our pastry, we made LE PITHIVIERS, which definitely stole the show in terms of presentation and the “wow” factor of the day!

I mean, just look at this thing… 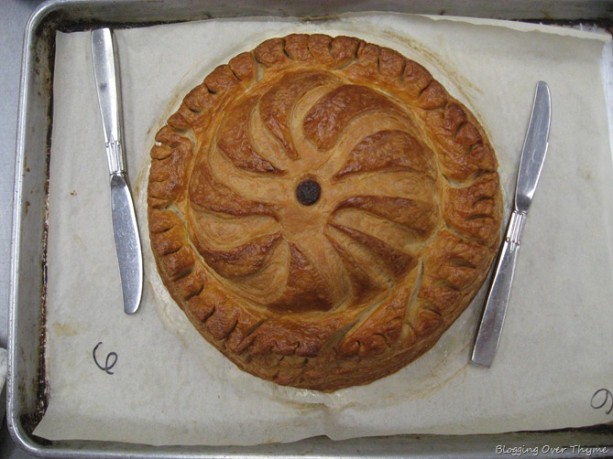 It is also known as a “King’s Cake”—and is basically two layers of puff pastry that are filled with frangipane, which is an almond flavored filling.  Frangipane is made by combining soft butter, powdered sugar, almond flour, cornstarch, eggs, and pastry cream (!).  We also added in a tiny amount of rum.

Can you believe that this thing starts off looking like this?! 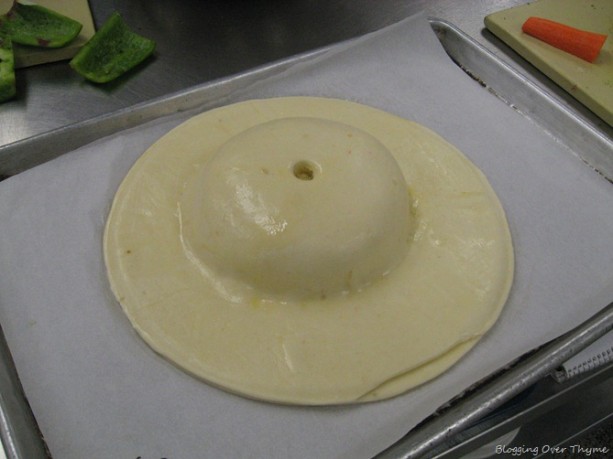 The filling in the center is molded and chilled in a bowl and placed between the two sheets of puff pastry.  You then using pairing knife to make the interesting pattern that you see below—making sure to cut only half way through the layer of puff pastry and not reach the filling, otherwise it will spill out during the baking process.  It is then brushed with apricot glaze for shine!

Puff pastry really does amaze me.  As you can probably tell from my last couple posts, we’ve already used it for so many different purposes and dishes (including savory and sweet). 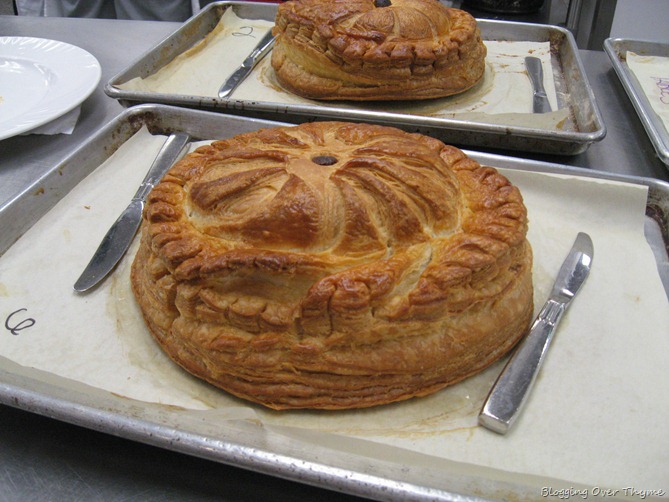 This is what the filling looks like when its sliced and served.  It looks boring, but it actually tastes really good! 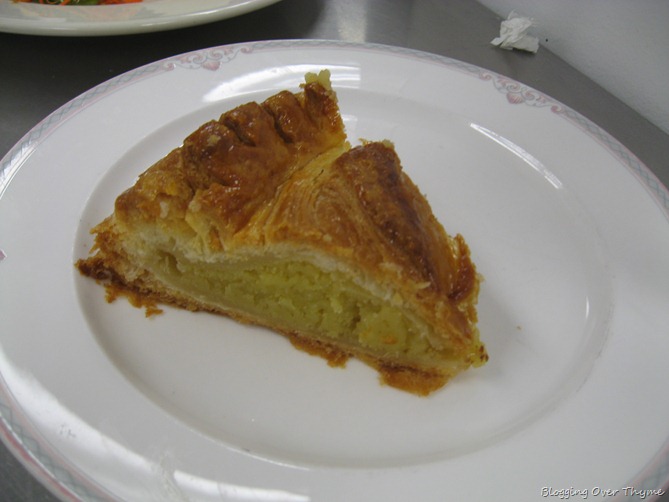 I had lots of fun during the day working with Lindsay (for the first time!) and Hadley!  We also plated right on time and were really organized, which is always a great feeling at the end of service. 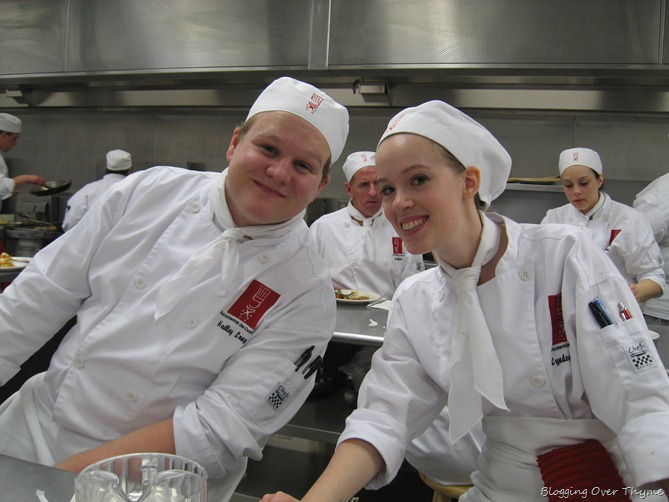 After cleaning up the kitchen, we also miraculously (I say this, because we almost never end up having a break) had about 10-15 minutes to chill and relax before getting back into the kitchen again (to start marinating our dish for the next day).

If you can’t tell, tying the neckerchief is still a skill I am not very great at!  You can tell this was after service, because my hat and scarf are totally crooked and wacky! 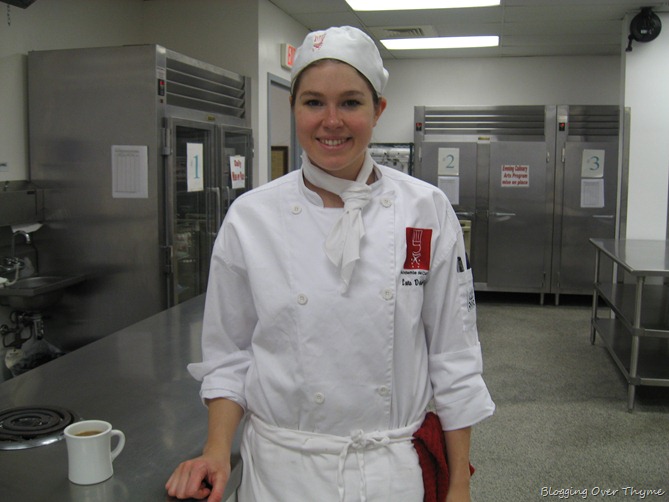 To pass the time, Hadley, Tasha, and I had fun with the demonstration table mirrors.  Note Tasha’s kicked up leg.  How beautiful! 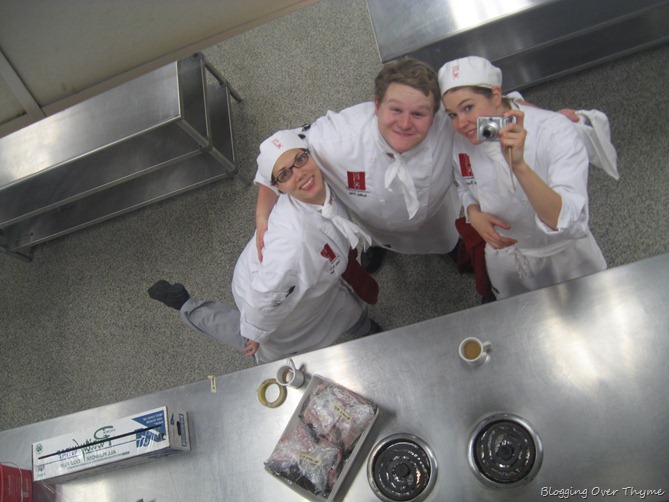 I promptly arrived home and crashed on the couch (unintentionally) for a several hours, before enjoying a casual dinner at my apartment with my parents, who arrived back home from England just the other day!

Back soon with my last update for Week 5—can’t believe it!

This post contains affiliate links, which means that I make a small commission off items you purchase at no additional cost to you. Please read my privacy policy for more information.
« Previous PostDay 16: Pommes Frites, Cheesy Puff Pastry, and L’Onglet
Next Post » Day 18: Coq Au Vin, Tarte Tatin, & Dim Sum