The past two days have been exhausting!  After Thursday’s class, I arrived home late, ordered pizza, and proceeded to fall asleep on the couch at 8:30 pm.  But the day’s menu was pretty delicious, albeit time-consuming.  We actually had been preparing for it the previous two days.

Our main course, and the one that required the most prep, was the classic French dish Pot au Feu, or a beef stew that usually includes marrow or oxtail.  To modernize the dish, we made ours as a consommé with tourneed vegetables, as well as short ribs, and a bone marrow flan.  Sounds pretty bizarre huh? 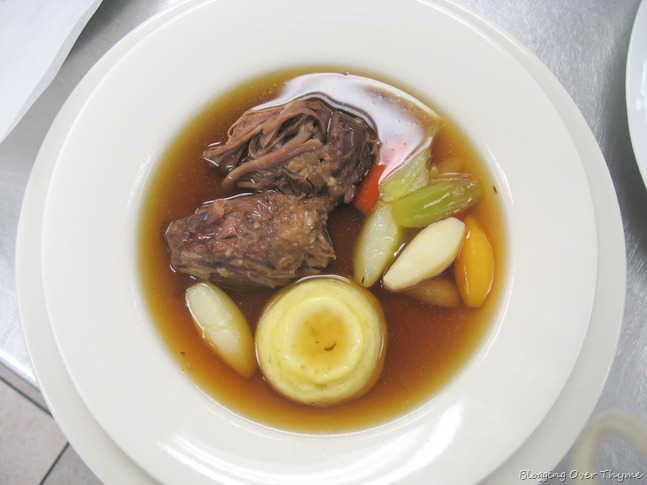 But it was actually really good. We basically made the base of a consomme (called a petite marmite) and slowly cooked short ribs in it (probably for about 3-4 hours in the end), before removing the short ribs and clarifying the stock to make the consommé.  Meanwhile, we had been preparing tourneed vegetables (celery, potato, turnip, butternut squash, carrot) for days, which we cooked all individually and added at the last minute.

We also made a bone marrow flan to go along with it.  We were given marrow (removed from the bone), which we infused with cream, shallots, nutmeg, and salt and pepper.  Then we carefully blended this all together with some eggs, passed it through a chinois, and cooked in a water bath at a very low temperature.  I have never had bone marrow before, so I wasn’t sure what to expect, but I liked it, even if it was very rich.  It went very well with everything else!   The short ribs were particularly delicious, because they were completely falling off the bone and so tender.  I have to remember to cook short ribs every once in a while at home. 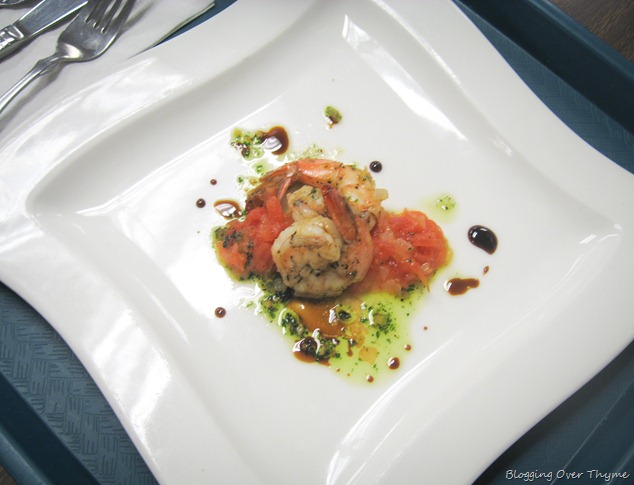 Our first course was a la minute pan-seared shrimp.  We made a quick pan sauce by sautéing very finely chopped shallots, garlic, crushed black pepper, and adding a lot of butter and parsley.  This was then flambéed with cognac.  Luckily, we all survived and our eyebrows are still intact, haha!

To go along with it, we also added to the plate a small amount of tomato concasse (roughly chopped cooked tomato & onion) and a bit of cordon (highly reduced veal stock).  Delicious!  Although I would have preferred a bit of lemon juice along with it.  I’m definitely going to make this again at home some day and maybe serve it with pasta.  A very quick dish to put together! 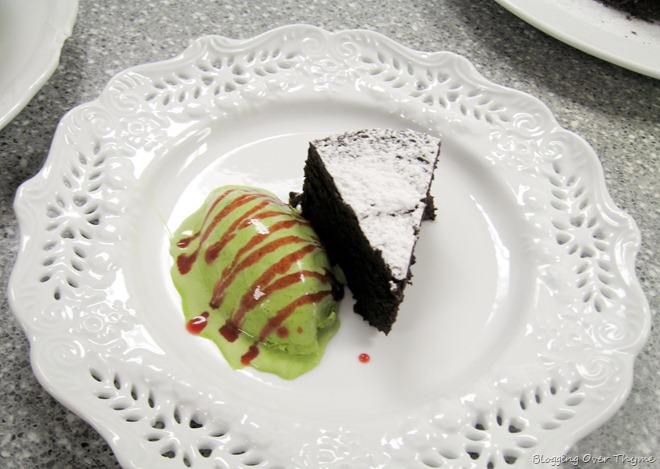 For dessert, we served a chocolate cake (probably the biggest understatement of the century) alongside homemade basil ice cream, which is Chef Patrice’s own personal recipe.  He bragged a lot about this ice cream (and how it would be his death bed wish) and he had every right to, it was one of the best ice creams I have ever had.  Seriously.

Basil is part of the mint family, so it actually had a minty element to it.  It is hard to describe exactly what this tasted like, but I am craving it again after just looking at the picture. The green color was completely supplied by the basil, not at all doctored.  This will be made again…

Though the basil ice cream might have stolen the show, the chocolate cake was also probably the best I have ever had (that’s saying a lot, too).  It was actually a flourless cake, spongy and incredibly moist/fudgy.  We were told during demo that the recipe is from a four-star restaurant in France.  And I am so happy to have it in my arsenal.  It went so well with the ice cream too!  So, so good.

After service, we spent the afternoon talking about the following day’s Market Basket challenge, which I will talk about all in my next post!