Week 19 (!) is a bit different than usual.  Chef Patrice is out of town doing several cooking demonstrations in Texas, which means Chef Michel and assistant, Allyson, are in charge.  Not to mention, we only have two production days this week, followed by our wine field trip tomorrow, and another Market Basket challenge on Friday. 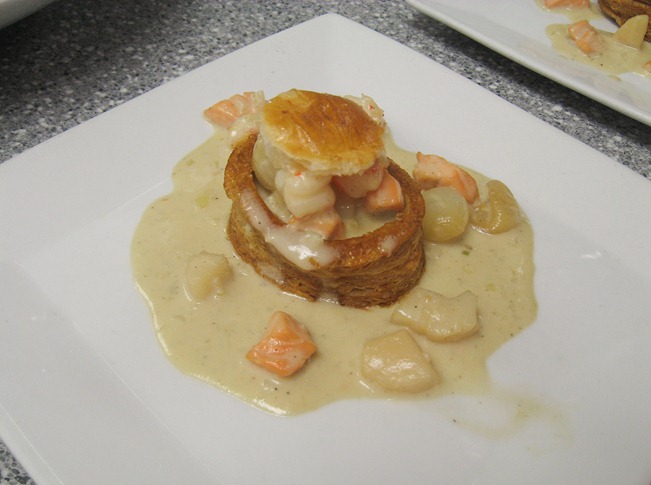 Our first course of the day was a seafood chowder, of sorts, served in a vol au vent (large puff pastry cup).  The seafood included fresh scallops, shrimp, and salmon, which we cut into small pieces and poached quickly in reduce fumet (fish stock) flavored with some finely diced shallots and vermouth.  One the seafood was cooked, we made a veloute by adding roux (flour + butter) and some cream.  It was very rich, but good.

Tuesday also involved cooking another (new to me) protein: sweetbreads.  Don’t let the name fool you, it is not anything of the sort.  I have to be honest, I wasn’t super excited to see these on the syllabus.  I realize that there are many people out there who love it, but I didn’t expect myself to be one of them.  Then again, I also had never tried it…but similar to the calf’s liver experience in Phase I, I had a feeling I wouldn’t enjoy it… 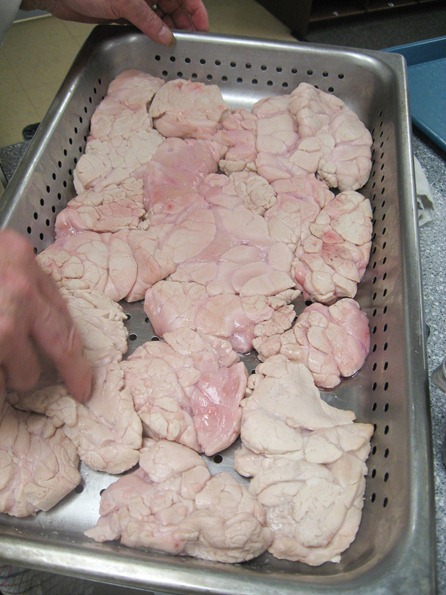 I’m sure many of you are familiar with sweetbread, but for those of you who aren’t, sweetbreads are the thymus gland of veal/lamb.  It is generally pan-fried and cooked pretty simply, perhaps with some lemon juice or another acidic sauce.  Sweetbread can also be the pancreas, but in our case, we worked with the thymus—however, in a culinary standpoint, it is taken from young calfs/lambs, because as they age, the gland shrinks significantly in size.  This is probably way more detail than you cared to read, but there you go!

Also—it is not a pretty thing to look at.  It basically resembles brain in texture.  To prepare it, you generally soak the glands in water to remove the blood and poach it, before using in other preparations.  We made a braise out of ours and served it alongside spinach gnocchi.

We have made a couple other variations of gnocchi in Phase I, but this was our first classical preparation of the dish with riced potato.  We used pureed spinach to color and flavor the dough.  I thought it was ok—but definitely not the best gnocchi I’ve had. 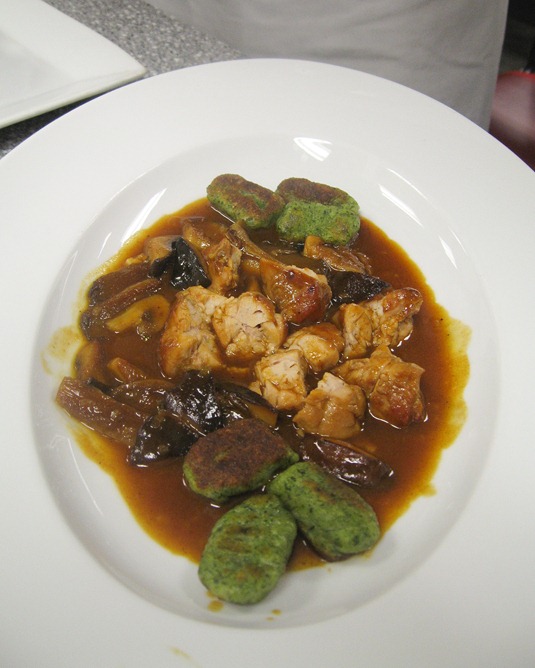 To try a more classical version of the dish, our Chef also put together a simple pan-fried variation with some lemon juice.  Again—I have told myself that I will try everything that we make in culinary school—but I definitely approached this with some trepidation.

Honest opinion?? It was not as bad as I expected it to be.  In fact, the texture was sort of like chicken.  However, about 30 seconds after I took a bite, I did detect a weird sort of after-taste that was a bit iron-y.  Let’s just say, I didn’t end up eating more of it for lunch… 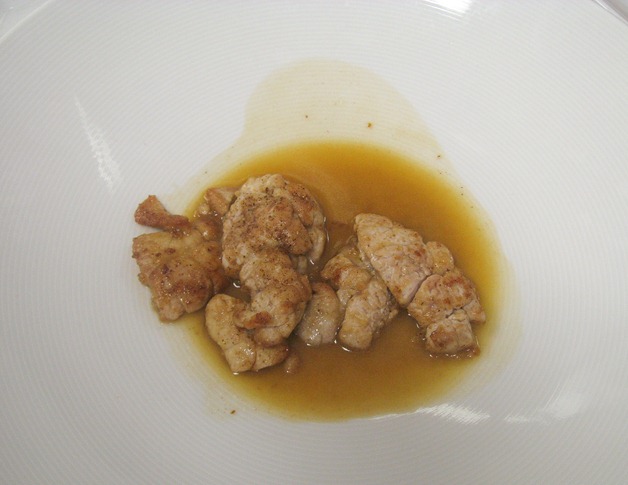 Last, but not least, we prepared a raspberry souffle for dessert. This soufflé was made a bit differently than our usual soufflés, because we used a simple combination of egg yolks, sugar, cornstarch (the distinguishing characteristic), raspberry puree, and a small amount of lemon juice as our base.  To this,we added whisked and folded in egg whites (stabilized with a small amount of cream of tartar and pinch of salt).

At this point, we filled our ramekins and placed them in the fridge until service.  This method of soufflé, as opposed to the other methods we have learned, is super convenient because it can be made the morning of and held perfectly until placing in the oven.  No last minute whisking of egg whites and folding!  A great dinner party idea, but equally as impressive as a regular soufflé. 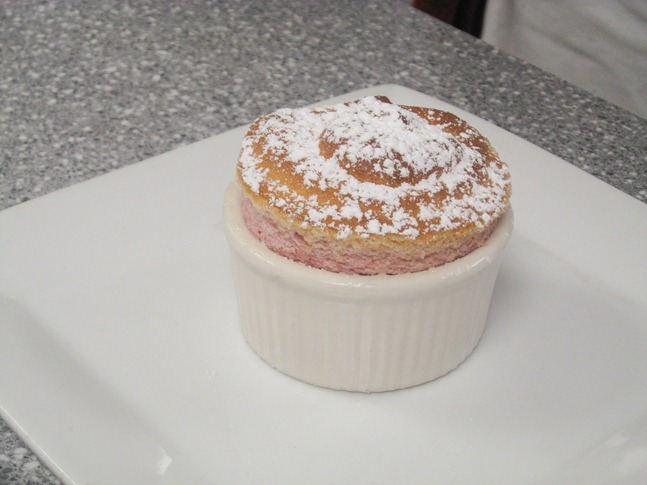 Overall, it was an interesting menu to prepare, but I left school hungry.  Luckily, I was able to get home in time to have a quick snack, before heading out the door to my fourth (and most likely, last) stage at a restaurant in downtown DC.  I  ended up staying there from about 6 pm to 9:15, before heading back home to get ready for the next day at school.  I will be sharing more about the upcoming externship over the next week or two, as I make my final decision—and will finally disclose where I have been going on all these stages!

Tomorrow, we have a break from school and are heading to our field trip at Boxwood Winery in Middleburg, VA!   I’ll be bringing my nice camera to take lots of pictures!

This post contains affiliate links, which means that I make a small commission off items you purchase at no additional cost to you. Please read my privacy policy for more information.
« Previous PostDay 69: Market Basket
Next Post » Day 71: Cheese Souffle, Curry, & Baklava