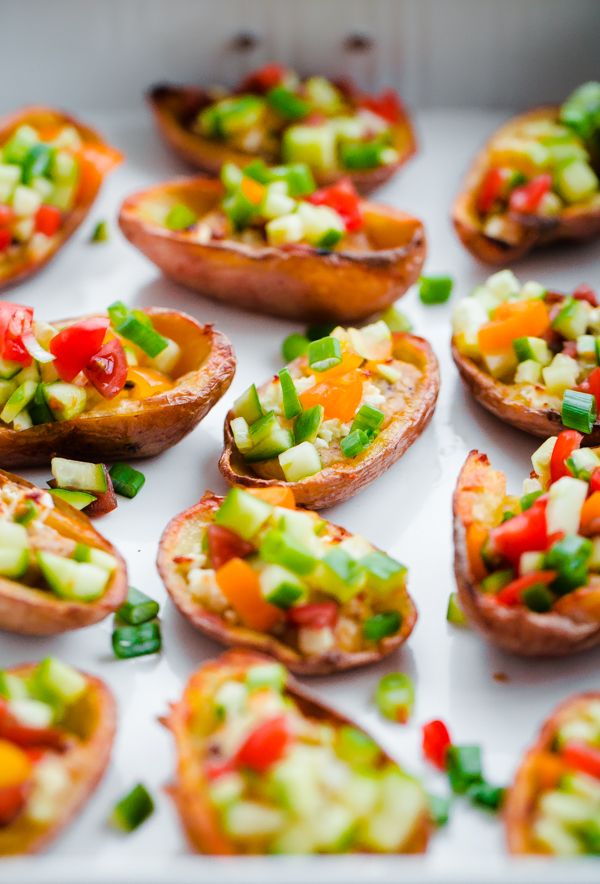 As most of you know (because I’ve told you three thousand times already), appetizers are my favorite part of any meal. If it were up to me, my dinner every night would consist of bites of various appetizers and snacks. Whose with me?

Easy snack and appetizer recipes are particularly important at this time of year. I don’t know about you, but my family gets hangry extremely easily (not an exaggeration), so bite-sized snacks are a must at all times. When I was trying to come up with a creative twist on a classic party or tailgating snack, crispy potato skins came to mind almost immediately. As crazy as this may sound, I don’t think I had my first potato skin until I was almost 27 years old. So, I’m making up for lost time.

Instead of going with a classic potato skin (filled with rich ingredients, such as  sour cream, cheese, and bacon), the idea for these lightened up Greek-style potato skins came to mind. They are filled with hummus, sprinkled with a touch of feta, and finished with chopped cucumber, tomato, and scallion. Super satisfying, tasty, nutritious, and vegetarian! [Naturally gluten-free too.] 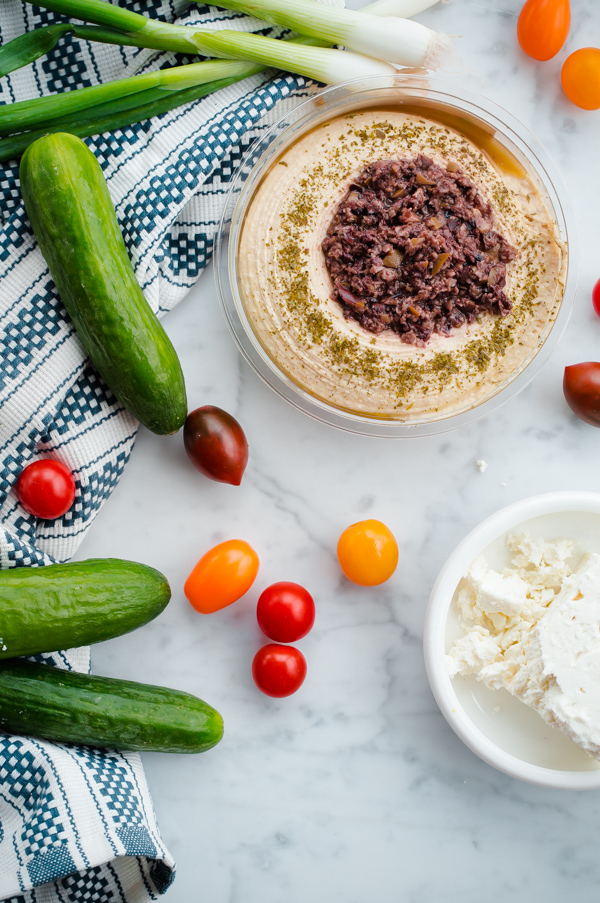 Most potato skin recipes call for russet potatoes. Instead of using russets, this recipe uses medium red (or yellow) potatoes. The skins are a bit more delicate, but I love that their smaller size makes these potato skins bite-sized. If you can find small russet potatoes, you can use those too!

To go with the Greek theme, I used Sabra’s olive tapenade hummus, which is my second most favorite hummus flavor after their lemon twist hummus. Olive tapenade is one of my favorite foods (remember this swirled tapenade bread?) and it pairs so perfectly with the hummus.

Once the hummus and feta are added to the potato skins, they are broiled in the oven for a few minutes. This allows the hummus to be warmed (if you’ve never tried warm hummus, this is a game-changer!) and the feta to be lightly caramelized.

If you’re not into olives, you could absolutely use classic hummus for these potato skins as well! Or simply substitute with another favorite Sabra flavor. As I’ve discovered over the past few years, hummus is so incredibly versatile. Just one of the many reasons why I love it so much. 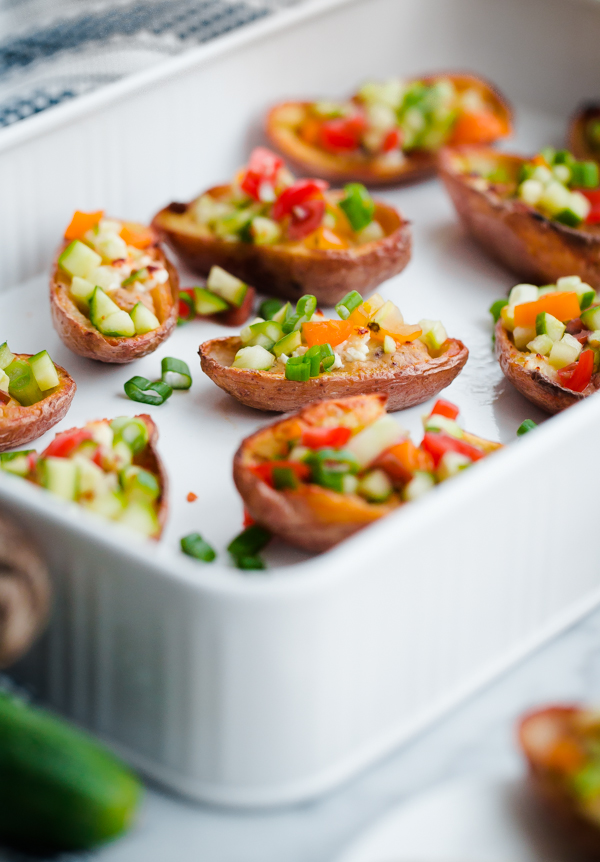 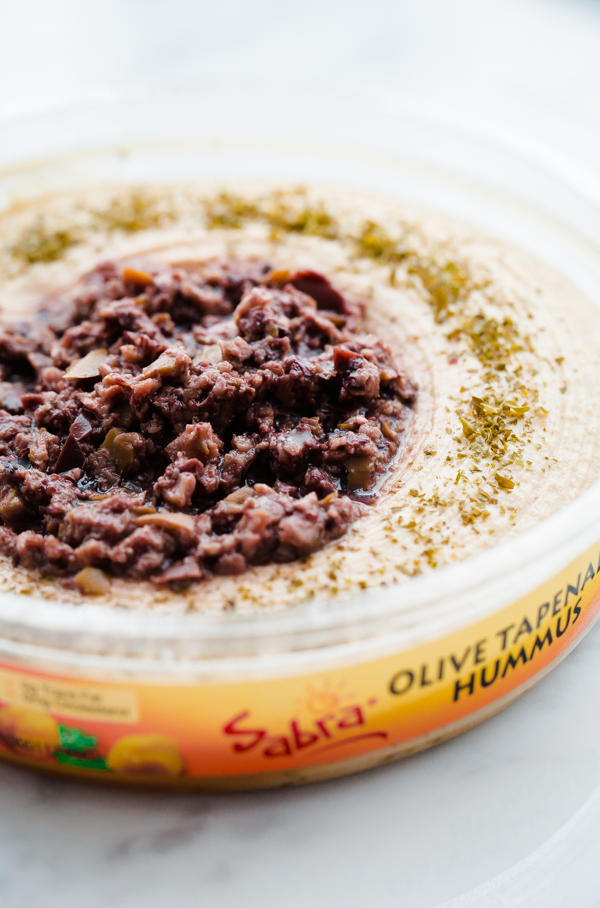 If you are bringing these potato skins to a tailgating or holiday party over the next few weeks, you can bake and prepare the potato skins in advance (sans any toppings), place them in a large container, and simply warm them in the oven for a few minutes at your friend or family member’s house before filling them.

You can also store the empty potato skins in the refrigerator for a few days prior – if you need to reduce prep time for the day that you want to serve them.

The rest of the ingredients can be packed up easily and brought with you for quick assembly! It doesn’t get much easier than that.

Bonus: These potato skins can be made vegan or dairy-free by simply leaving out the feta cheese. Voila! Or you can simply set aside a few potato skins without cheese. No one is left out of the fun! 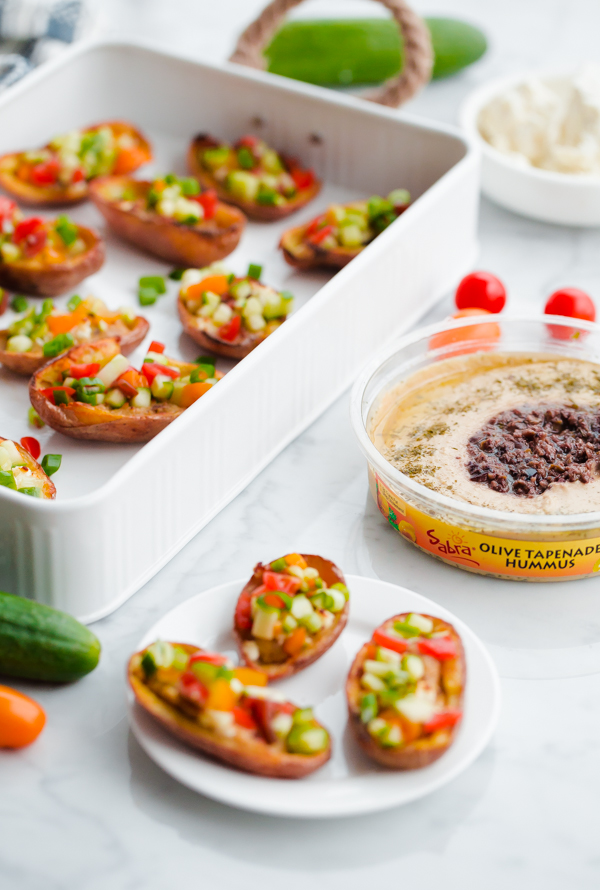 Just remember to make lots of extras! These things are quite addictive and it’s hard to stop at just one! The good part? No guilt required. 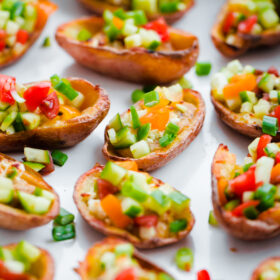 For the Potato Skins:

This post is sponsored by Sabra.  I am proud to be part of the Sabra Tastemaker program. Thank you for supporting brands that help make this site possible!

This post contains affiliate links, which means that I make a small commission off items you purchase at no additional cost to you. Please read my privacy policy for more information.
« Previous PostBlood Orange Chocolate Bark with Almonds
Next Post » The Sunday Thymes