This cheater Cornish Pasty recipe is made easy with store-bought puff pastry sheets. The creamy potato leek filling is roasted on a sheet pan with fresh thyme, and tossed with heavy cream and layered with cheddar cheese. A modern twist on an English classic! 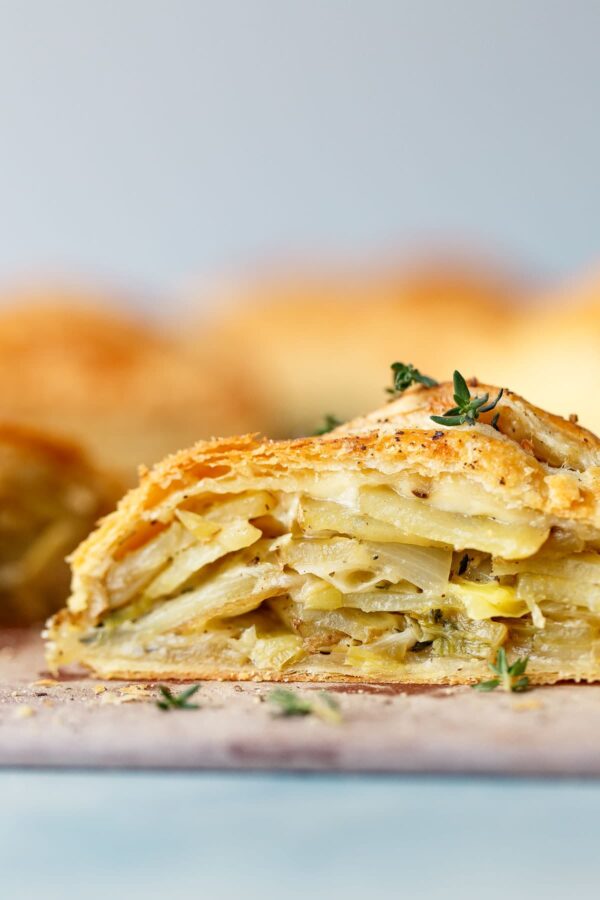 A Cornish Pasty (pronounced PASS-tee) is one of my all-time favorite comfort foods. If you’ve never heard of them before today, you’re in for a treat!

Pasties are a traditional savory British pastry originating from Cornwall, England, where I used to visit my late grandmother every single summer as a kid. It is a staple food of the region and no summer would be complete without me eating as many of them as possible.

Most traditional Cornish pasties are semicircular in shape, prepared with a crimped shortcrust pastry dough, and filled with meat and vegetables. They’re essentially the British version of meat pies.

For whatever reason, my family always preferred the equally as popular vegetarian pasty filled with cheese, onions and potatoes. 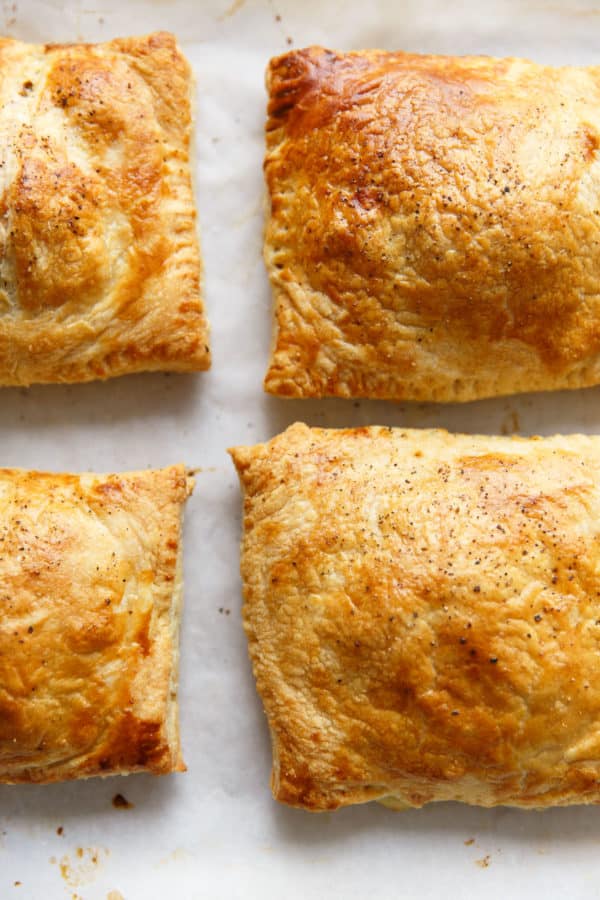 The Trick To Easy Homemade Pasties:

Using this flavor base as my source of inspiration, I’ve created a cheater Cornish pasty recipe that tastes nearly identical, but can be prepared in a fraction of the time. The trick? Store-bought puff pastry sheets, which allow these flaky pastries to be prepared in just over an hour with half the effort.

These might not look traditional, but their flavor is spot on! They’ve been given an elegant modern twist with the addition of buttery Yukon gold potatoes, leeks, and fresh thyme. 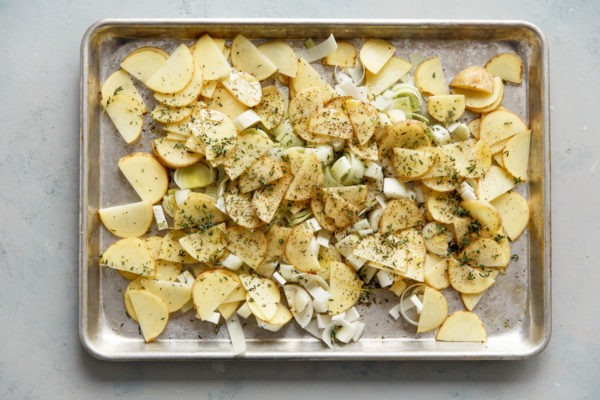 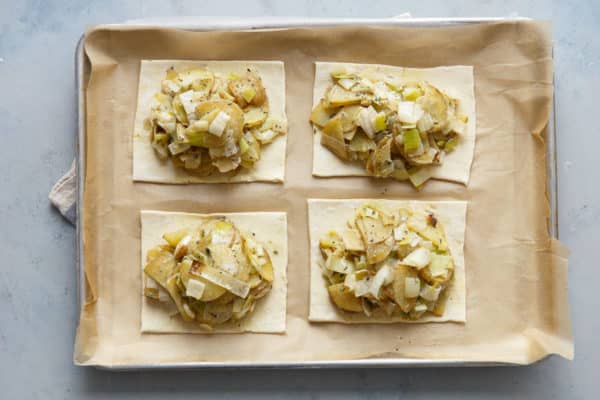 How to Assemble Cornish Pasties:

To make these pasties relatively time-friendly, this recipe uses store-bought frozen puff pastry sheets instead of traditional shortcrust dough. It also cuts the total cook time to just over an hour.

To keep them simple, these Cornish pasties are rectangular in shape, making them even easier to assemble. 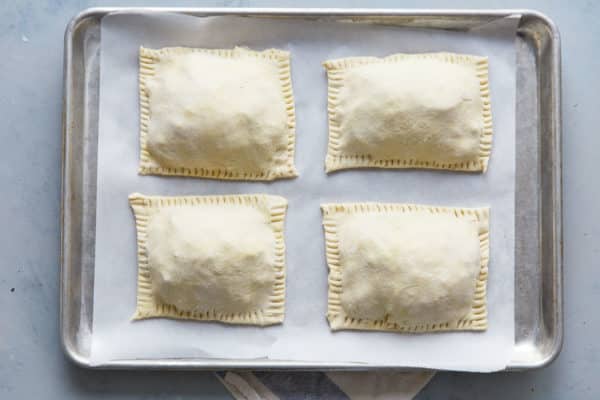 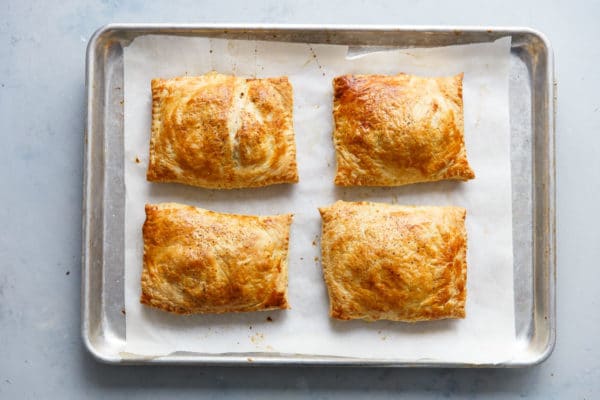 The puff pastry yields a Cornish pasty that is lighter and even flakier than the original. It also eliminates the need to make your own dough from scratch or chill it in stages.

Frozen puff pastry typically thaws in about 45 minutes time, which works perfectly for this recipe, because this is roughly the amount of time that it will take to prepare the potato leek filling. Note: You can even make these pasties hours or days ahead, wrap and store them in the refrigerator, and reheat them in the oven just before serving! [See recipe notes for more details.]

The filling for these Cornish pasties consists of thinly sliced Yukon gold potatoes, leeks, diced onion, fresh thyme, heavy cream, sharp cheddar cheese, salt and a generous amount of black pepper. Why yes, I literally could not have stuffed more carbs into this if I had tried.

The potato, leek, and onions are tossed together with fresh thyme and olive oil, spread into a thin layer on a half sheet pan, and par-cooked in the oven. This helps soften the leeks and onion and prevents anyone from biting into undercooked potato. 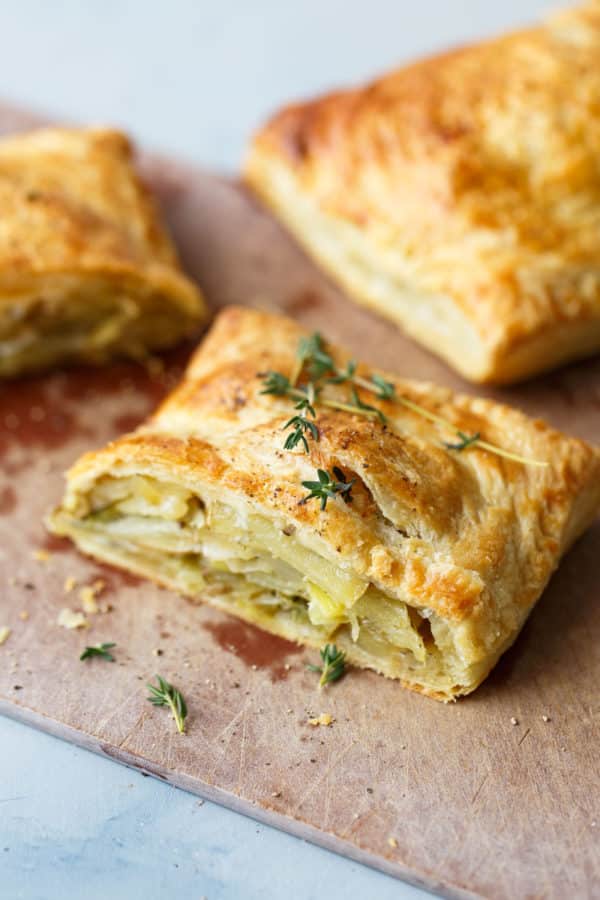 The warm potato-leek-onion mixture is then tossed in a large mixing bowl with a touch of heavy cream, before being evenly distributed on the puff pastry rectangles, layered with sharp cheddar cheese, and sealed with another top layer of puff pastry. It is similar to the process of making homemade hand pies.

These pasties only require a bake time of 25 to 30 minutes total and should be served warm from the oven. A light egg wash before baking helps produce an extra golden and crisp flaky pasty crust. 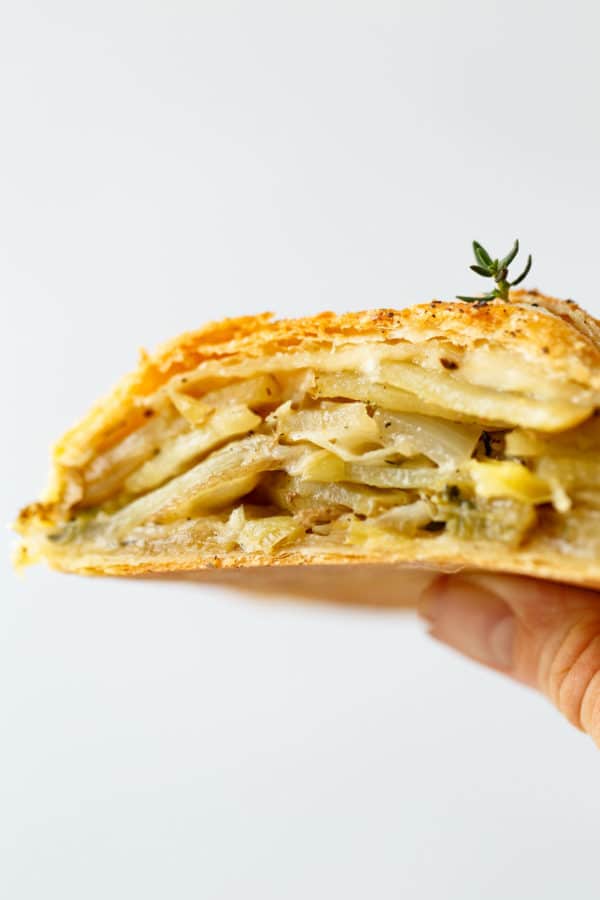 Once baked, the leeks, onions, and cheese melt into the sliced potatoes and produce an incredibly delicious pastry that you won’t be able to stop eating!

Serve them straight from the oven as a main course with a large simple salad (tossed with an acidic lemon vinaigrette to cut the richness) on the side.

This recipe produces four large pasties. You could also slice them in half to produce eight smaller servings and serve them alongside another more substantial vegetable side dish or soup. 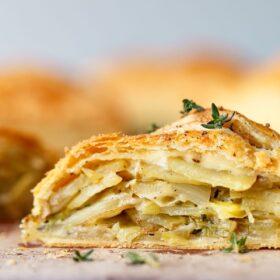